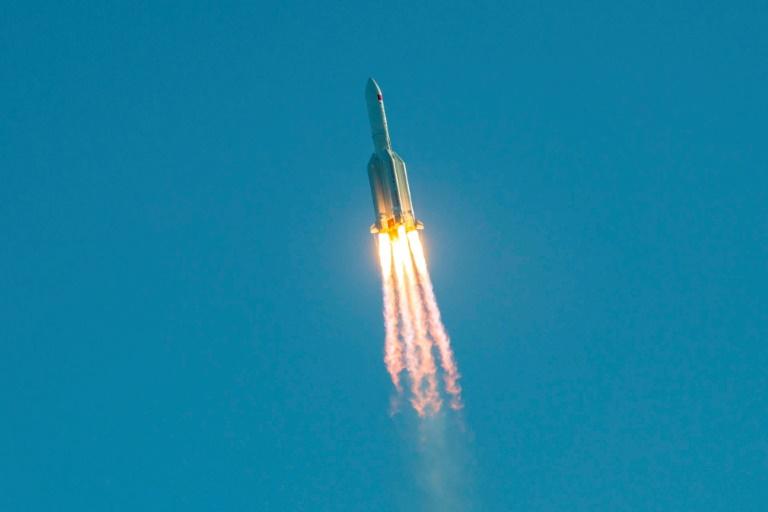 The Long March 5B rocket took off from the southern island of Hainan and eight minutes later an unmanned prototype spaceship successfully separated and entered its planned orbit, according to state media. AFP Photo

China on Tuesday successfully launched a new rocket and prototype spacecraft, state media said, in a major test of the country’s ambitions to operate a permanent space station and send astronauts to the Moon.

The Long March 5B rocket took off from the Wenchang launch site in the southern island of Hainan and eight minutes later an unmanned prototype spaceship successfully separated and entered its planned orbit, according to the Xinhua news agency.

A test version of a cargo return capsule also successfully separated from the rocket, Xinhua added.

The spaceship will one day transport astronauts to a space station that China plans to complete by 2022 — and eventually to the Moon.

It will have capacity for a crew of six.

The spaceship and capsule are slated to return to a landing site by Friday after completing their test flights, Ji Qiming of the China Manned Space Agency told a press conference.

Leader of the command headquarters for the flight mission Zhang Xueyu said the launch had “strengthened confidence and determination” for the next stages of China’s space programme.

The United States is so far the only country to have successfully sent humans to the Moon.

But Beijing has made huge strides in its effort to catch up, sending astronauts into space, satellites into orbit and a rover to the far side of the Moon.

The successful maiden flight of the 54-metre Long March 5B — which has a takeoff mass of about 849 tonnes — should reassure China, following failures of the 7A model in March and 3B model in April.

“The new spaceship will give China an advantage in the area of human spaceflight over Japan and Europe,” said Chen Lan, an independent analyst at GoTaikonauts.com, which specialises in China’s space programme.

The US no longer has its own spaceship since retiring the space shuttle in 2011 and relies on Russia to send astronauts to the International Space Station.

Beijing has launched several spacecraft since 1999 and the previous vessel, the Shenzhou, was modelled after Russia’s Soyuz.

“It depends how ambitious the Chinese space programme is at the moment but missions beyond the Moon will be possible,” said Carter Palmer, space systems analyst with US-based Forecast International consultancy.

Assembly of the Tiangong space station, whose name means Heavenly Palace, is expected to begin this year and finish in 2022.

The orbiting lab will have three modules, with living and working quarters and two annexes for scientific experiments.

China plans to send an astronaut to the Moon in about a decade and then build a base there.

It became the first nation to land on the far side of the Moon in January 2019, deploying a lunar rover that has driven some 450 metres so far.

The next big mission for Beijing is to land a probe on Mars, with liftoff expected this year.

“China has caught up with the US in some space areas like earth observation and navigation,” Chen said.

“But there are still large gaps between China and US in deep space exploration and human space flight,” he said, adding the US was the “leading space power today, yesterday and in the near future.” – AFP