Thursday, August 6
You are at:Home»Features»Autism — a hidden ability to be unveiled 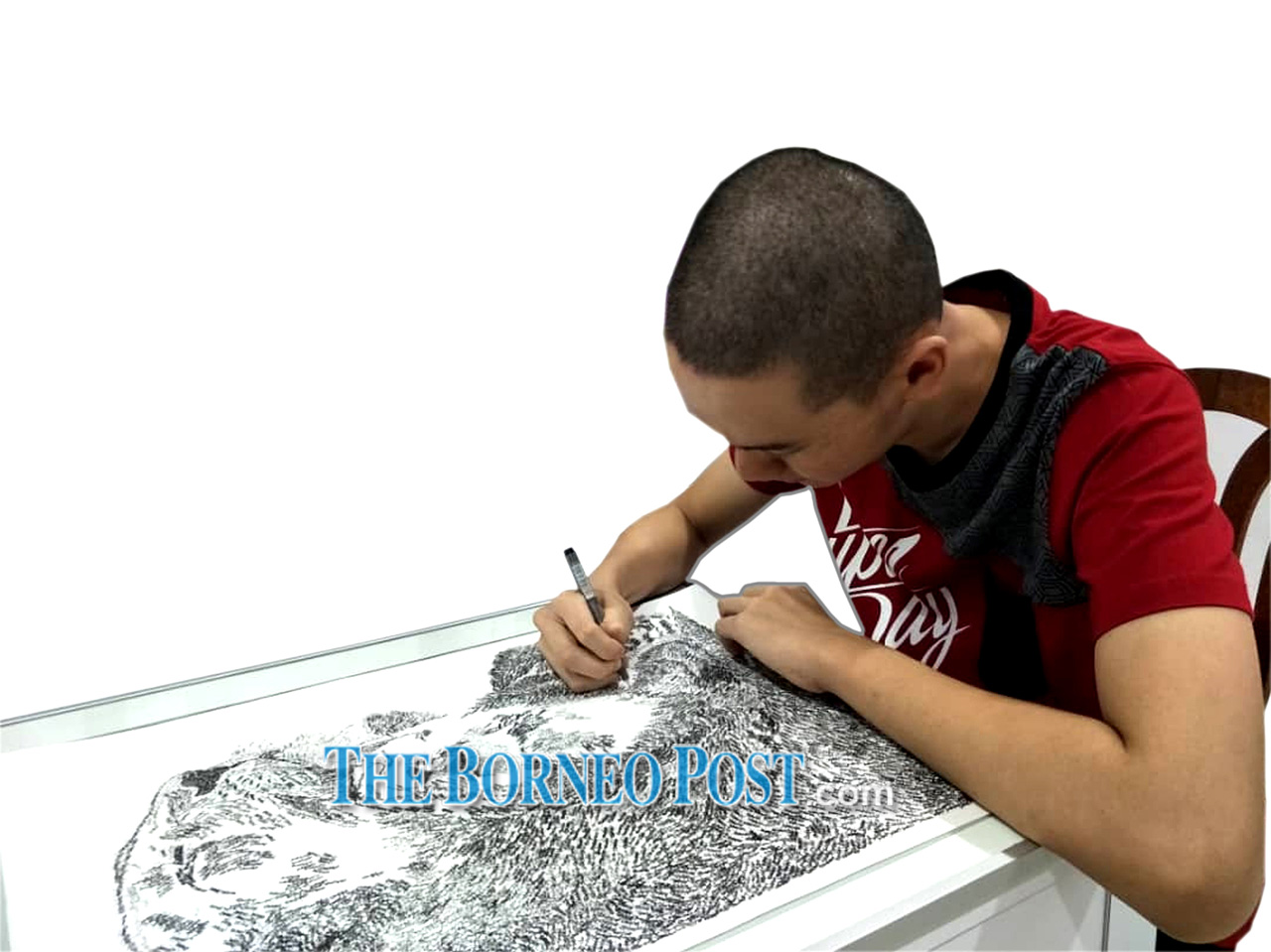 Lim works on one of his masterpieces.

I AM astonished by this portrait of Einstein, which I first saw at Oasis Place in Kuala Lumpur. Perhaps it is because I was never a good artist myself — seeing the fine artworks produced by other people has always impressed me a lot, especially when I am told that the artist who created this piece of art has autism.

I was told that if I looked close enough, I would see that this portrait of Einstein was made up of millions of ants put together. As I moved closer to the picture and squinted my eyes, I was left speechless by the talent of the artist.

Lim Yu Heng is a 26-year-old man with a spectacular talent in art. He was diagnosed with autism at a young age. His parents discovered his natural gift in art when he was two years old, when he first picked up a pencil and drew something. 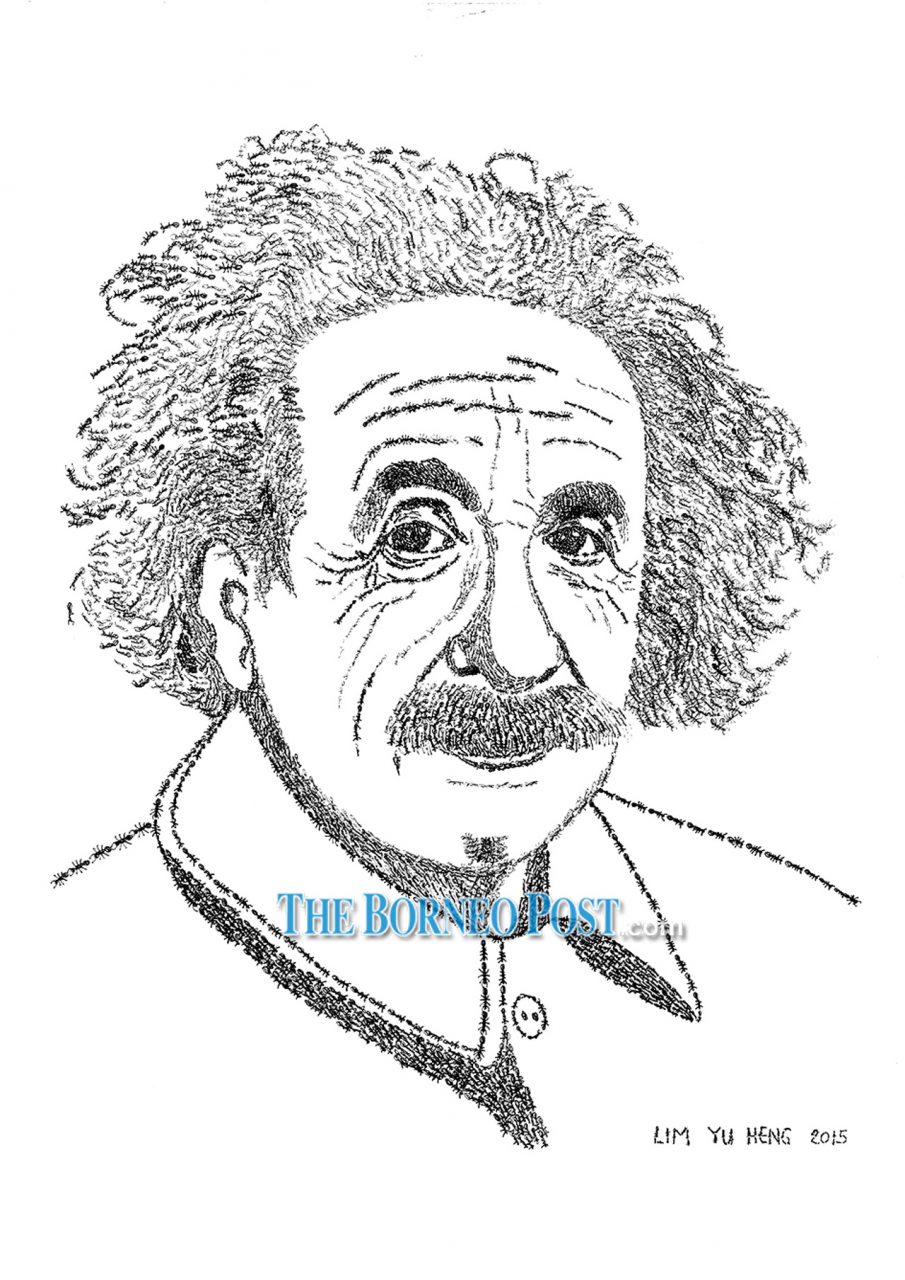 The portrait of Albert Einstein, which has been sold.

His photographic memory of information from different sources such as books, characters from television programmes and computer games, together with his amazing creativity, soon became his supply of inspiration to draw (http://yuhengantsworld.com/).

Lim loves to draw and he is exceptionally talented at drawing a big picture using small objects such as insects, especially ants. His gift enables him to draw the ants at different angles and perspectives to achieve different effects, such as shading, allowing him to produce realistic pictures. To achieve what has been done today, Lim and his parents worked hard and persisted through a rough journey. 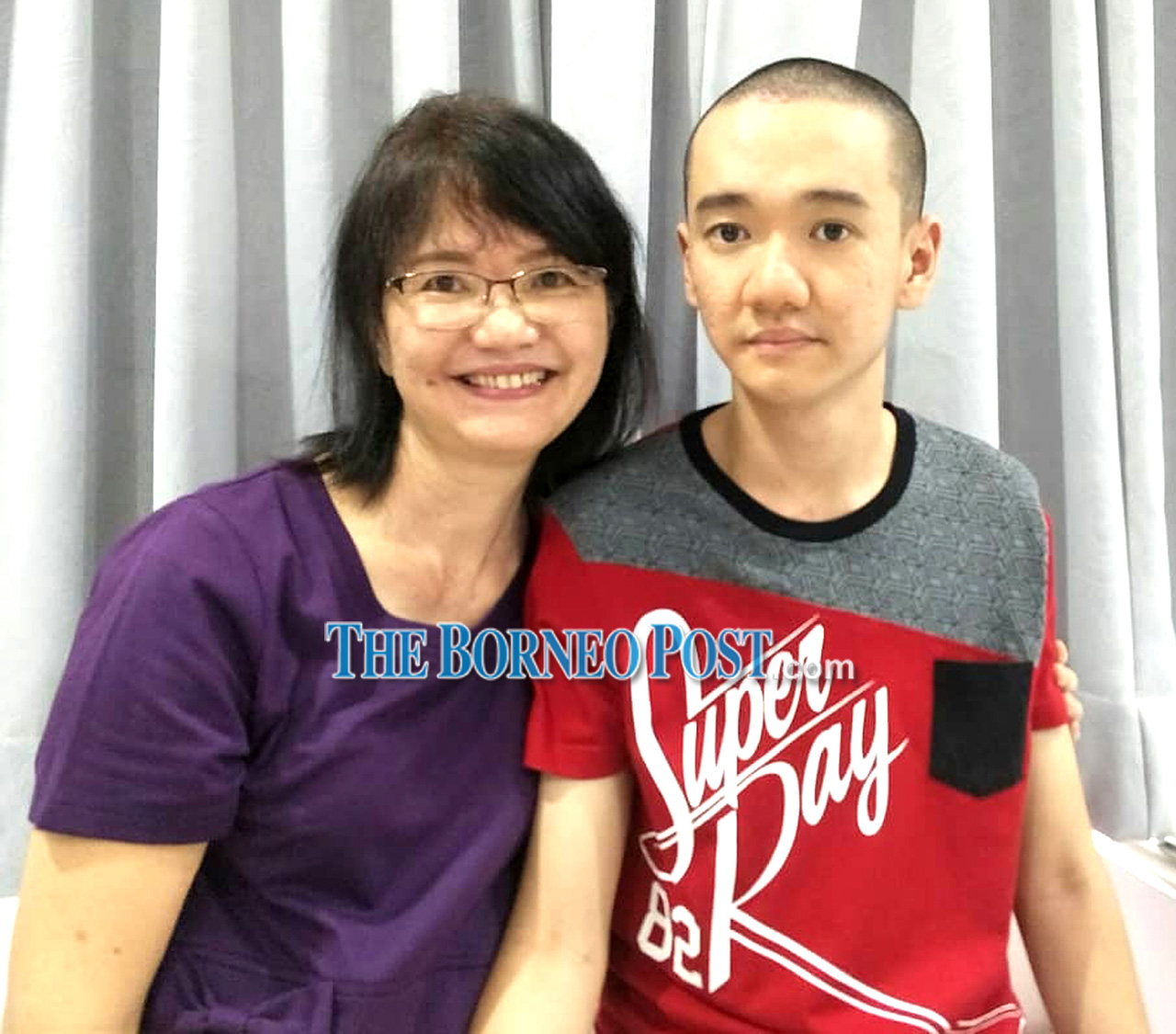 When Lim was first sent to an art class, he was asked to be taken home just after 10 minutes, as he had trouble settling down. In 2008, Lim’s art career took a huge turn for the better. He met his art tutor, Huang Pei Ru, who gave full support towards developing his talent.

Lim and his mother continued to attend the class despite the long journey between home and the workshop. They often ended up reaching home after 10pm even when they left home at 2pm that day.

I first worked with children who have disabilities when I was 10, during a Special Olympics Healthy Athlete’s Programme, and subsequently through volunteer work in various non-governmental organisations, doing swimming training with them. I met many young people with talents over the years. I have also met people who would often showcase their talents during dinners, many of which would always impress the crowd. 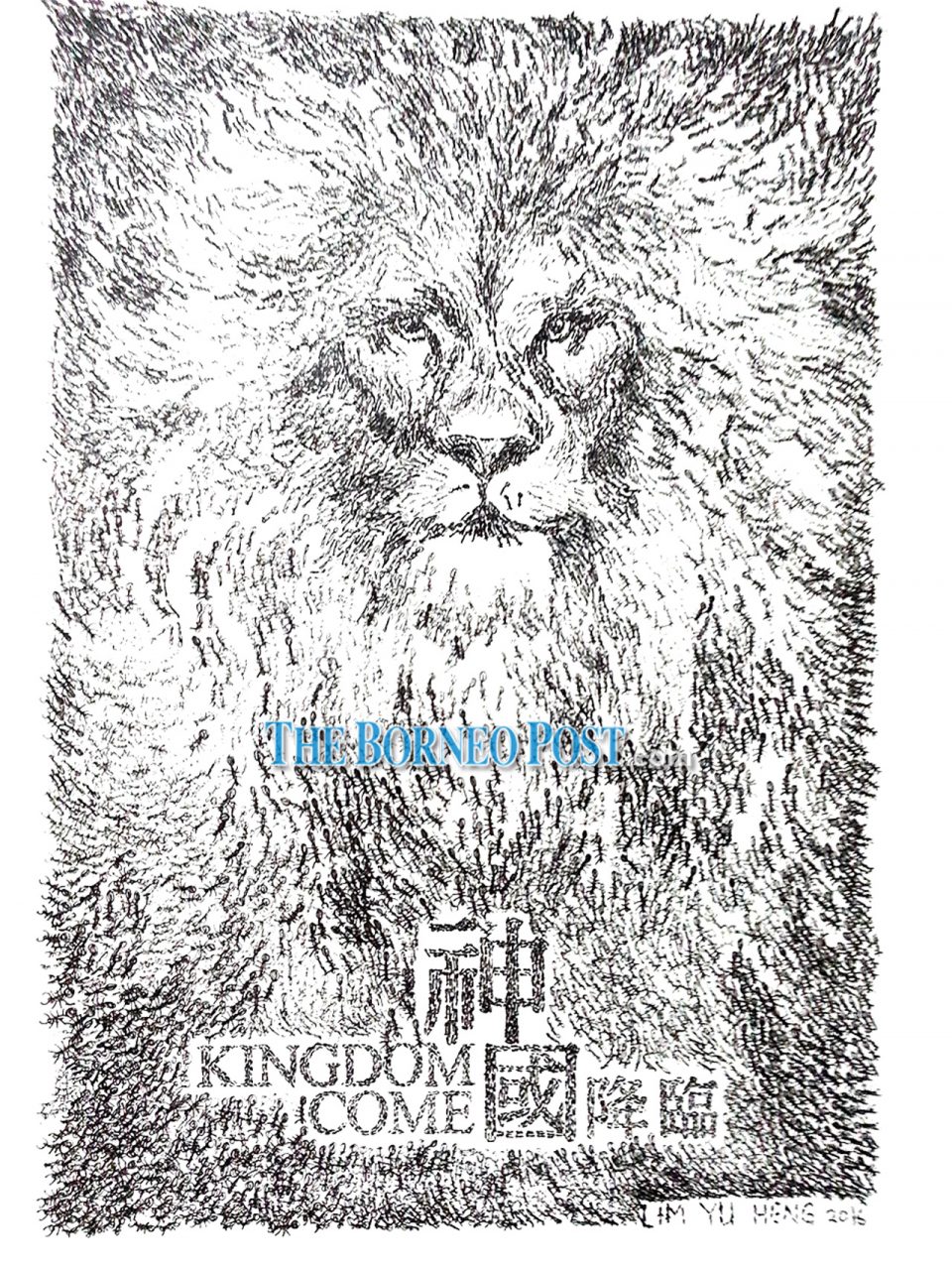 For example, Ernest Teo, who has visual impairment, but still manage to excel in violin, or Yak Fang Ling, who recently scored all A’s in Sijil Tinggi Persekolahan Malaysia (STPM).

They’ve shown us that being visually impaired is not a reason to not strive for excellence!

However, whenever people meet those with disabilities, they often only see the things that they cannot do instead of their hidden talents. In the eyes of most people, autism means a disability, to the best, it is an inability to do many things that we consider normal.

I do agree that those with autism may have limitations when it comes to communication. However, I must also ask how many people in the world can sit down with a pencil and draw a picture made up of thousands of ants?

I recently watched the television series ‘The Good Doctor’. It is a story about a surgeon who has autism. The series did an outstanding job in highlighting the difficulties an autistic person faces when it comes to communication. However, what I genuinely like about the series is that they did not forget about all the strengths and talents an autistic person may possess.

In the series, Shawn, the doctor with autism, also has savant syndrome. Although he has trouble connecting with patients, he also saves many patients with his superhuman memory and extraordinary talent to focus on the table, which not everybody can achieve. Although it might just be a television series, it gives us hope that people with autism can also show us unlimited possibilities if they are raised and trained properly. 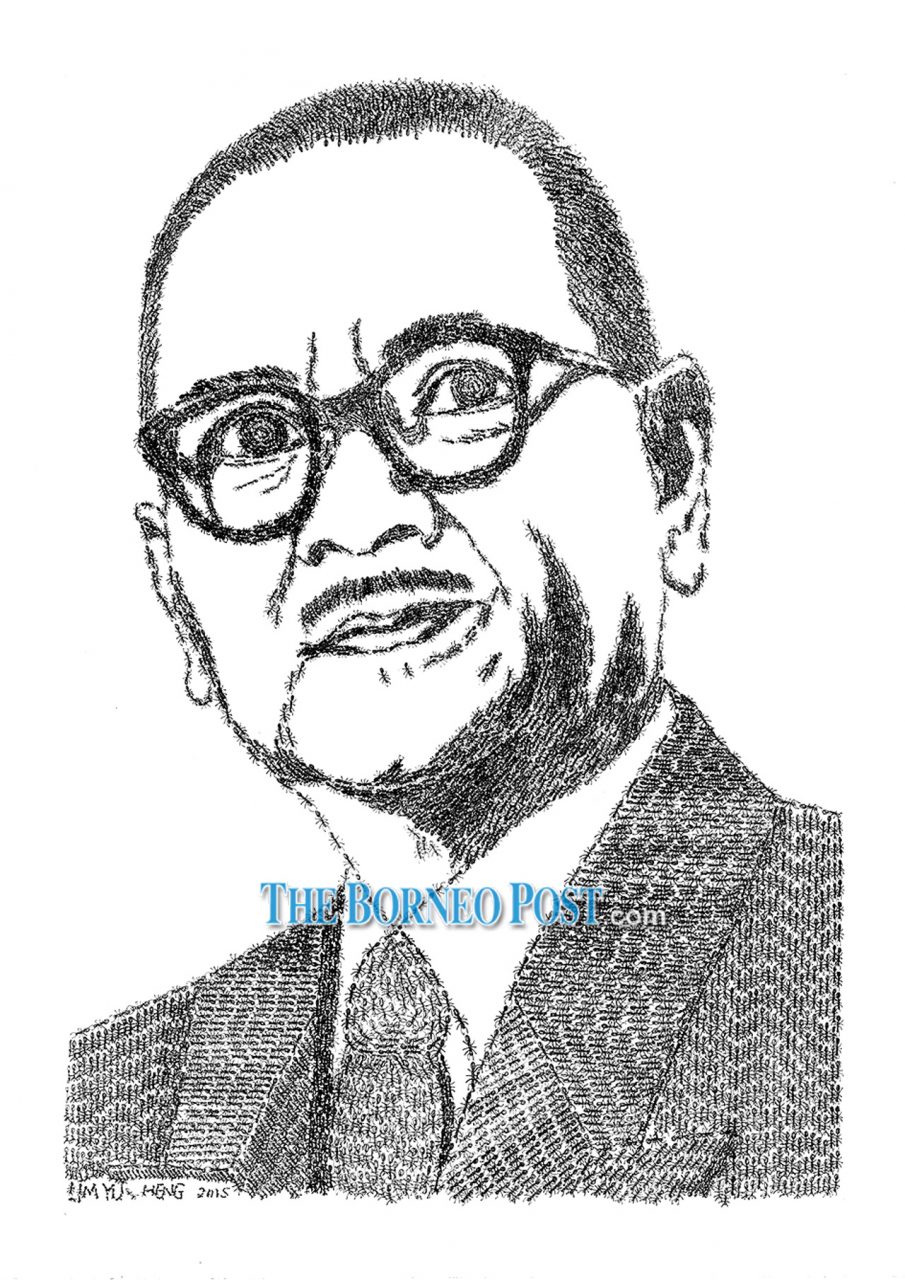 Unfortunately, if we test children with autism based on the criteria of which we think is considered normal [such as the Wechsler Intelligence Scale for Children, 55 per cent of them would be classified as intellectually disabled (IQ<70)]. However, for people like Lim, they are very talented, they just present in a different way.

Many people find the repetitive behaviour and obsession over details of the population with autism weird, but for Lim, these characteristics have become his strength. He can manage to draw so many tiny ants repetitively perhaps because he has this condition. 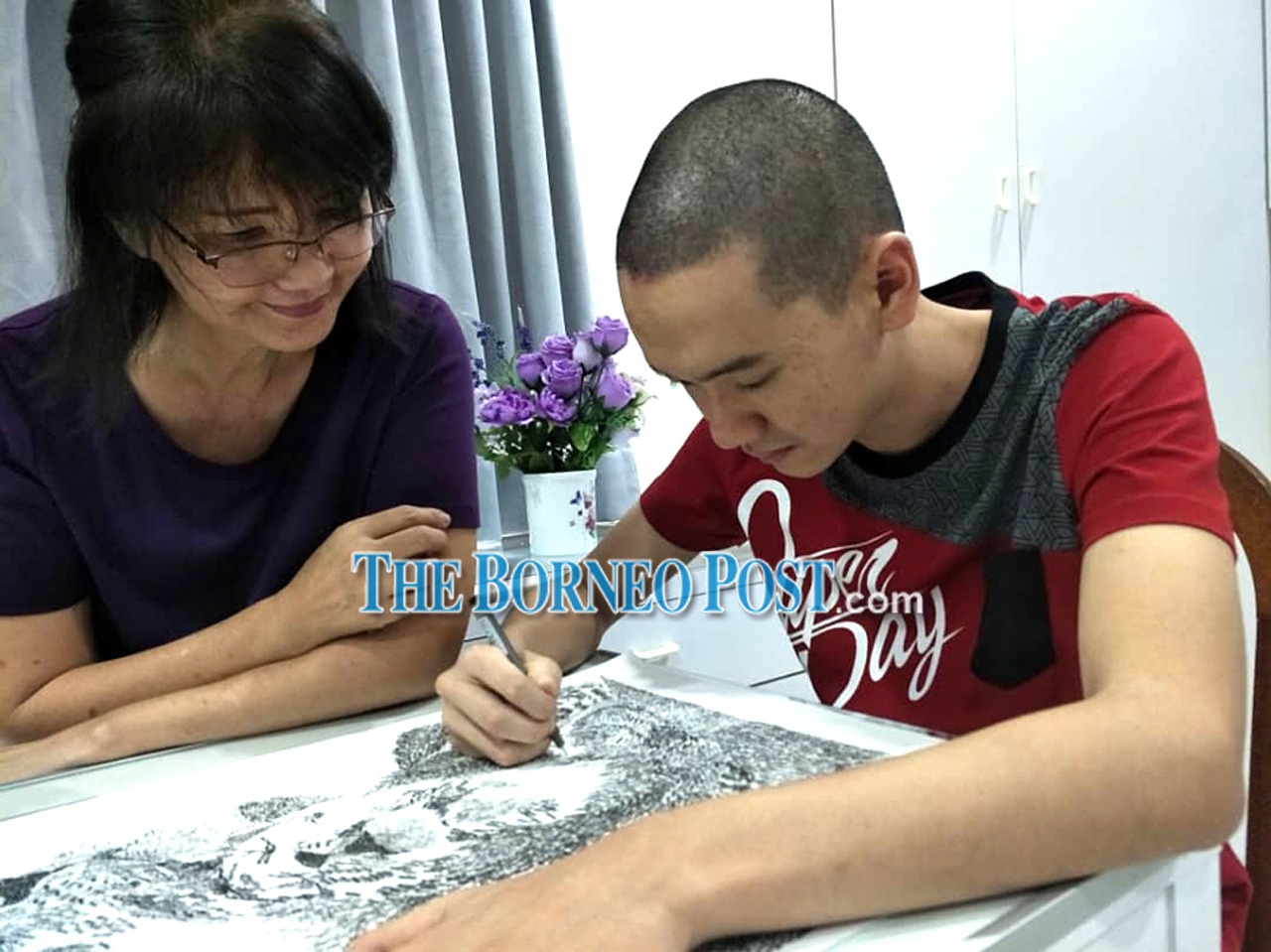 Lim’s mother looks on as he works on an art piece.

Lim’s case perfectly fits this hypothesis as he is still very creative, although he faces trouble in day to day communication. You may ask what imagination is, well, in Lim’s mind, imagination is to use these thousands of ants to paint a picture — something that many people cannot imagine in the first place.

Hans Asperger once said, “It seems that for success in science or art a dash of autism is essential. For success the necessary ingredients may be an ability to turn away from the everyday world, from the simple practical, an ability to rethink a subject with originality so as to create in new untrodden ways, with all abilities canalised into the one speciality.”

He made this claim as people with Asperger’s syndrome (autism spectrum disorder without language or intellectual impairment), often dedicate their lives to one single topic of their interest due to their obsession over one problem, which allows them to become the best in that field. 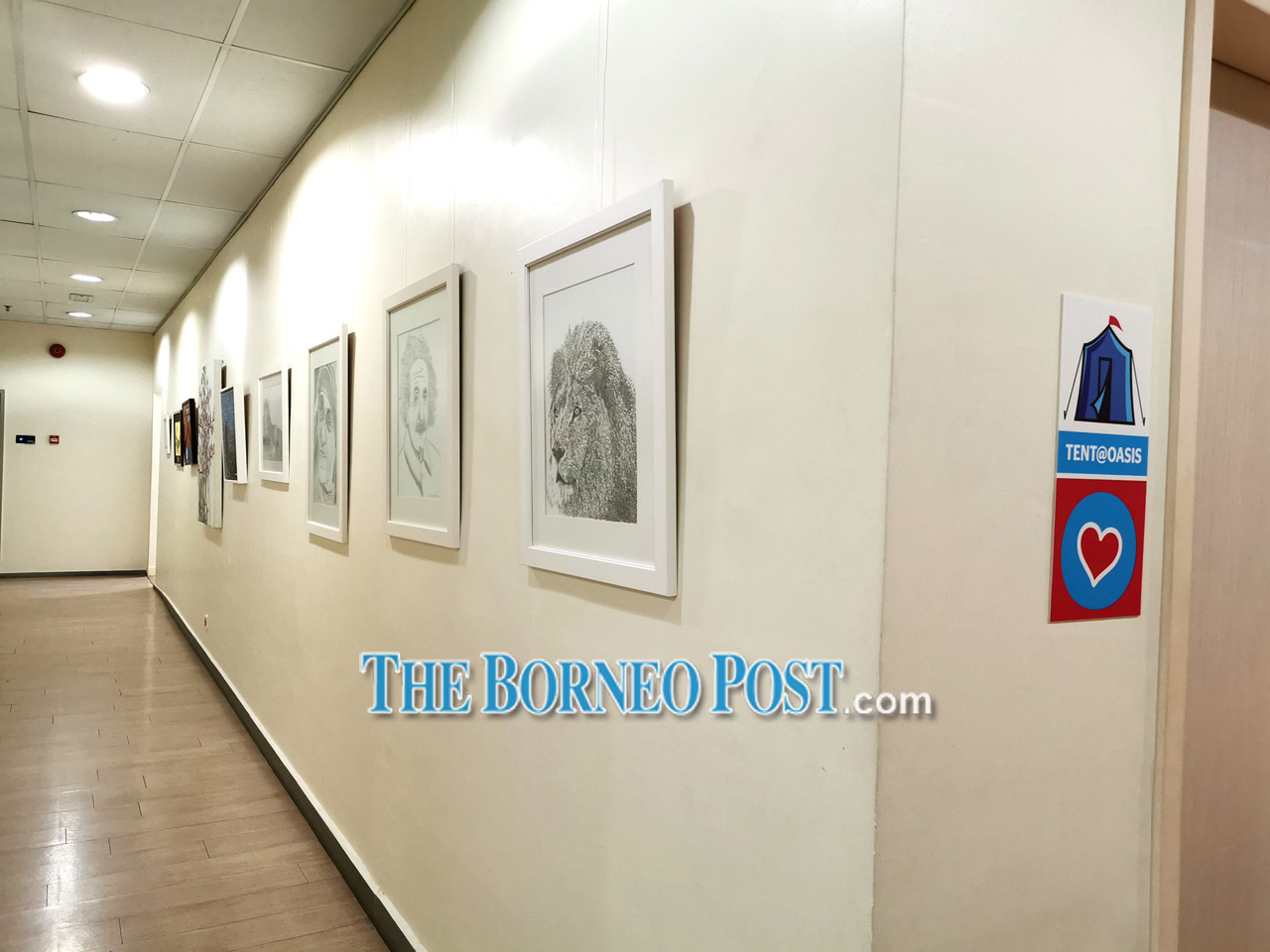 Lim’s artwork is seen along the Corridor of Talents.

Interestingly, many famous scientists are suspected of having Asperger’s, for example, Albert Einstein! He is said to have had difficulties forming close relationships and making friends. Although he did make some friends later in his life, he still exhibited an elusive coldness towards his colleagues, according to one of his close friends, the atomic physicist Lise Meitner.

In conclusion, Lim’s work and many people I met made me realise what great things people can achieve, despite facing certain challenges. They may have trouble communicating, but that only means that they need extra support and care. With sufficient nurture and training, it turns out some of them may even be more talented than us! Therefore, I believe that society should pay more attention to people with disability, and provide more platforms for them to shine.

Lim’s works are displayed at Oasis Place’s Multidiscipline Intervention Centre, Kuala Lumpur. His artworks lead the path in the Corridor of Talents, which promotes autistic and different abled artistic artwork. This is part of Oasis Place’s ethos to promote investments by organisations and corporates for hidden talents to have visibility.

Aaron Toh Aw Zien is a Year 1 Medical Student at the Institute of Medical and Biomedical Education, St George’s, University of London.