Friday, August 7
You are at:Home»Features»Friends reconnect at grand reunion 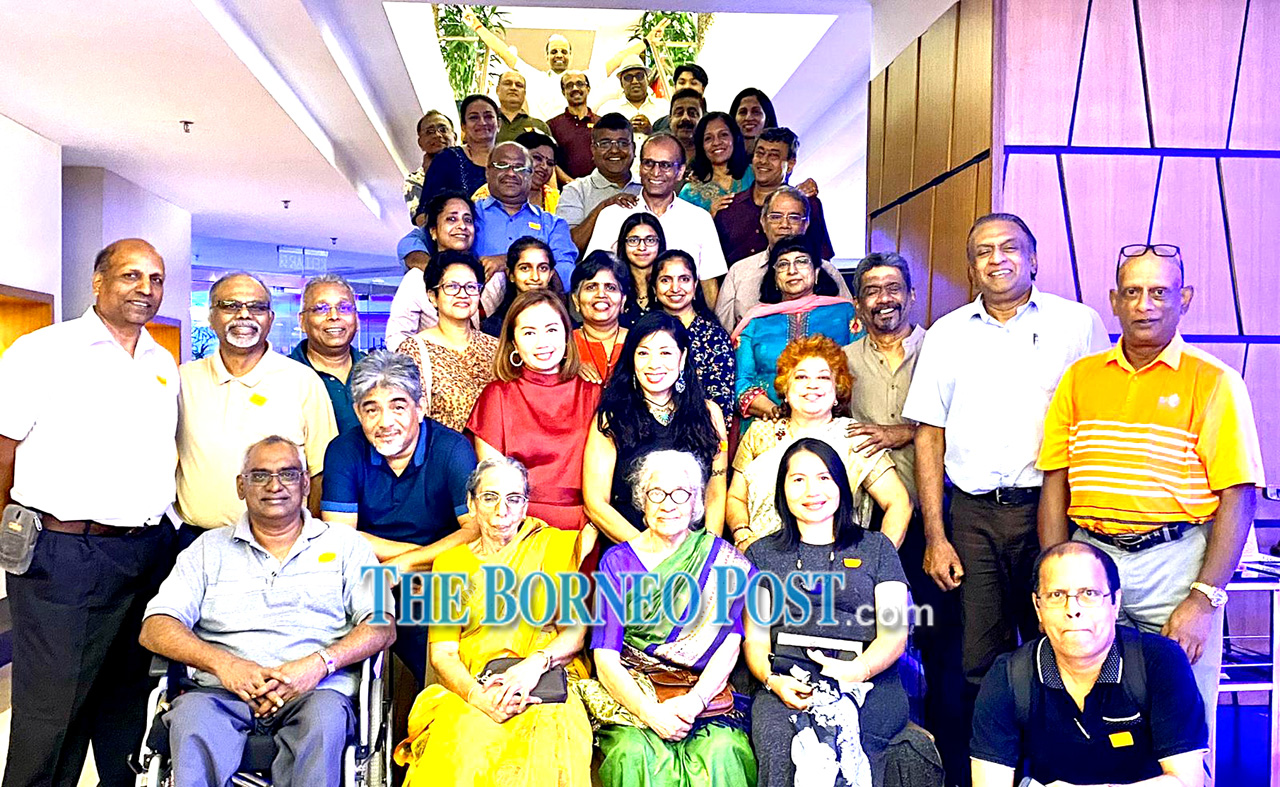 The attendees capture a moment for the album.

IT was a heartwarming gesture for a group of Indian nationals to make Kuching their one-of-a-kind rendezvous for a grand reunion some months ago — before the Covid-19 pandemic.

Making up the group were the children of families who had made tremendous contributions to the early development of Sarawak. They came from all over the world, including some from Malaysia, for the occasion.

Their parents had come to Sarawak during the colonial days in the 1950s and 1960s to work as teachers, doctors, land surveyors, and technicians. Some arrived in the 1970s.

In those days, Sarawak was just beginning to develop in earnest — a period where priorities were given to advancing education and building infrastructure.

Teachers were recruited from India and posted to both mission and government schools throughout the state. The majority served in the three main towns — Kuching, Sibu and Miri — while the rest were posted to townships such as Mukah, Bintulu, Limbang, Lawas, Marudi, Serian and Betong.

According to Josh John, who attended the reunion, sometime towards the latter part of the 1950s, the Public Works Department (PWD) initiated a flurry of infrastructural development projects, involving the heavy task of clearing jungles to build roads and bridges.

Many civil engineers and surveyors were needed to handle the technical and specialised aspects of building a crucial communication system that would link up the whole country.

One group of Indians were employed by the Post and Telegraph Office to set up telecommunication facilities (including for airport control towers) and post services.

Another group of professionals, especially doctors, were recruited for the medical sector, while a smaller group came to work in the police force and correctional centres.

“Initially, many single Indians, in their 20s and 30s, came to take up contract work. After completing their jobs, these young expatriates returned to India to get married and, would return to Sarawak again with their wives when their contracts were renewed,” Josh recalled.

It must have been a struggle for those courageous women to accompany their husbands and raise families in Sarawak, especially when their breadwinners were posted to remote areas surrounded by rainforests. But they adapted well to the culture of the indigenous people and even took to learning some of the local dialects.

Some of these expatriates decided to stay put and took up Malaysian citizenship, while others chose to return to India when their contracts expired. A number of them migrated to other parts of the world. 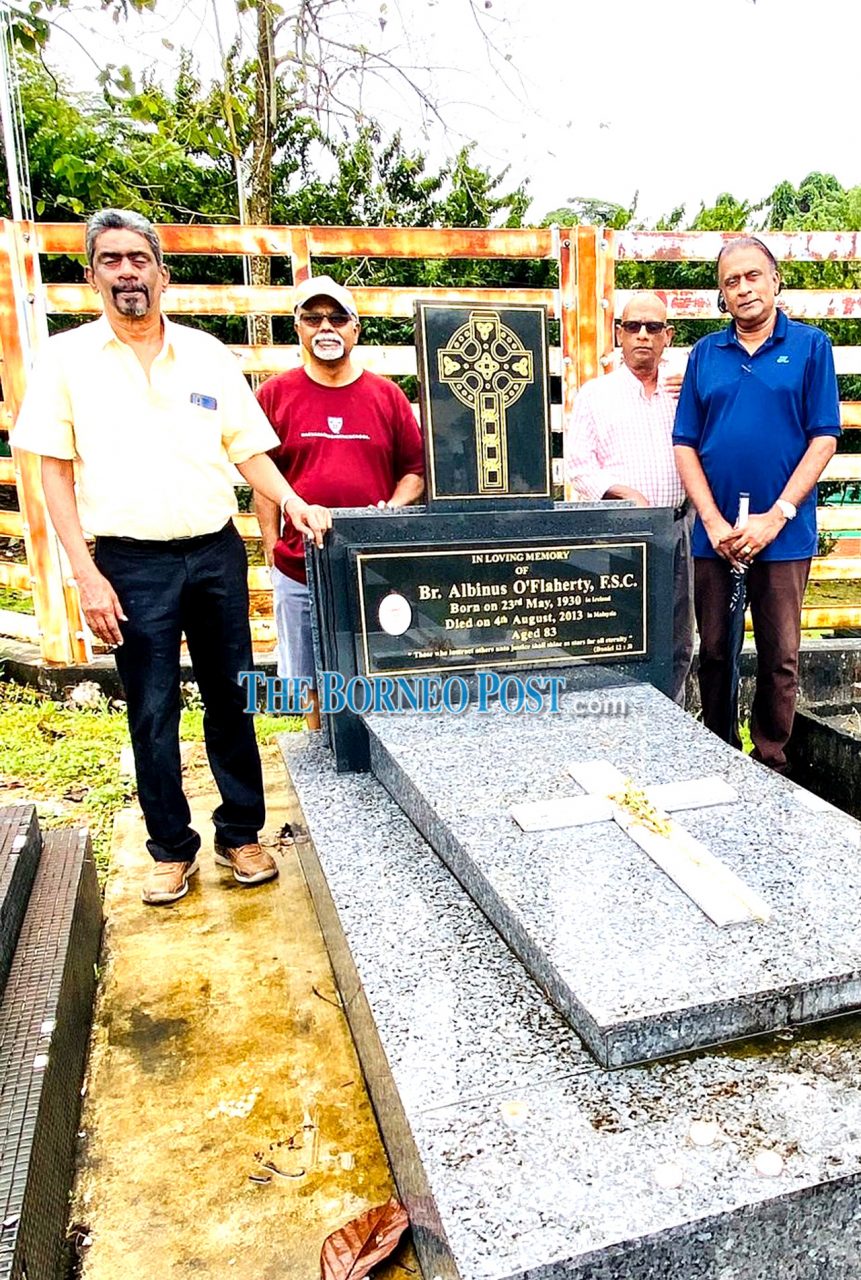 Some of the attendees visit O’Flaherty’s grave.

One thing those early Indian expats gave top priority to was their children’s education. They could see that education was the key to a bright future. And no matter how challenging the circumstances, they would still try to find ways for their children to be educated to as high a level as possible.

As a result, many of the children went to study in top universities and a number of them have become renowned professors, lecturers, teachers, lawyers, engineers, doctors, businesspersons, highly-placed government officials, senior executives, and journalists.

One of them had on his post-retirement bucket list a wish to reunite with his childhood friends and schoolmates from Sarawak and he started searching for them on social media.

He created a WhatsApp chat group for Indian children who grew up in Sarawak from the 1950s to the 1970s. Many of them eventually joined ‘the club’ and made it to Riverside Majestic Hotel in Kuching for the grand reunion.

The logistics were managed by Kuching-based Murali Krishnan with support from the Karunakaran, Jayasimhan, Murugaiah, John, and Sebastian families.

There was plenty of catching up as many of the friends had not met for decades and the generation of the reunion attendees are now in their 1950s and 1960s.

A microphone was passed around so everyone could share briefly about what they have been doing since leaving school to pursue their own life path.

They also shared fond memories of their stay in Sarawak and many hilarious stories of the good old days. Many of them attributed their success to their upbringing in Sarawak, the values instilled in them by their hard-working parents, and the various skills they picked up working with the locals.

The centres of attraction were two senior citizens, Premalatha Karunakaran and Ramani Krishnan, both of whom have been living in Sarawak since the 1950s.

They knew the parents of all the attendees and were happy to share stories and experiences of yesteryear. 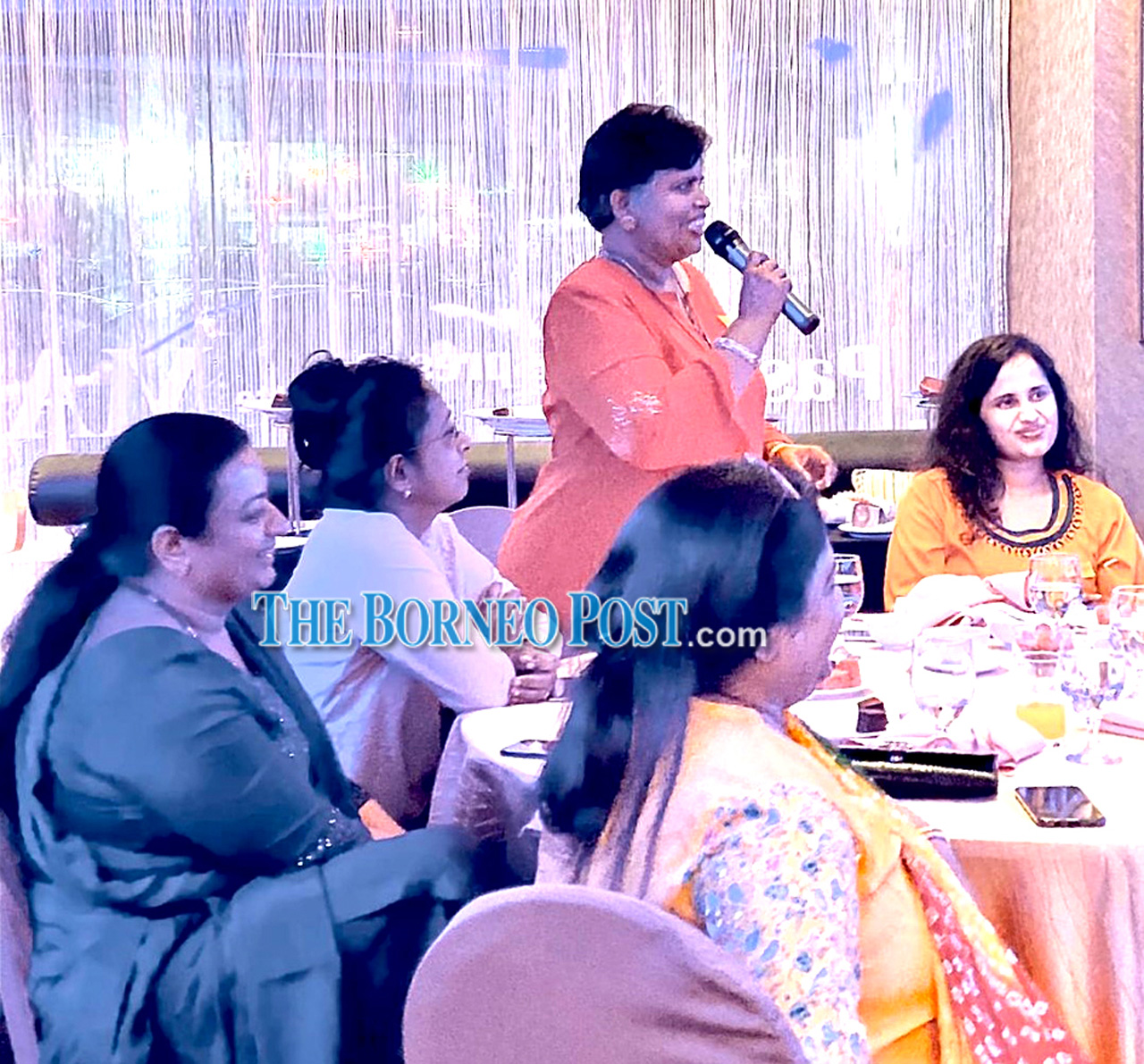 During their stay, some of the participants took the time to pay respects to their parents, who passed away while working in Sarawak.

Sanil was one of the attendees who visited the grave of his father, Dharman, a surveyor and instructor with the PWD. Dharman died while working in Miri in 1981 at the age of 51 and was buried at the Hindu cemetery there.

Sanil and his siblings were very young at the time and after losing their sole breadwinner, the family returned to India. Over the years, they had wanted to visit their father’s grave but did not know how to go about it.

Later, with the help of friends in Miri, Sanil became the first member of his family to visit their father’s grave after a lapse of 38 years. It was an emotional moment for him.

While in Sarawak, he also visited his schools, including SK Batu Lintang, and their old house along Jalan Bampfylde.

Anil Dharmapalan and his sister Anita also came with memories of their mother, Omana, who passed away at Sarawak General Hospital in 1972 when they were still very young. At that time, their father was working with the PWD and posted to Sungai Tenggang near Simanggang.

Unfortunately, they could not locate their mother’s resting place because of the dense undergrowth at the Hindu cemetery. They offered prayers for her soul at the Hindu Temple at Jalan Ban Hock, hoping to return one day to continue the search for her grave. 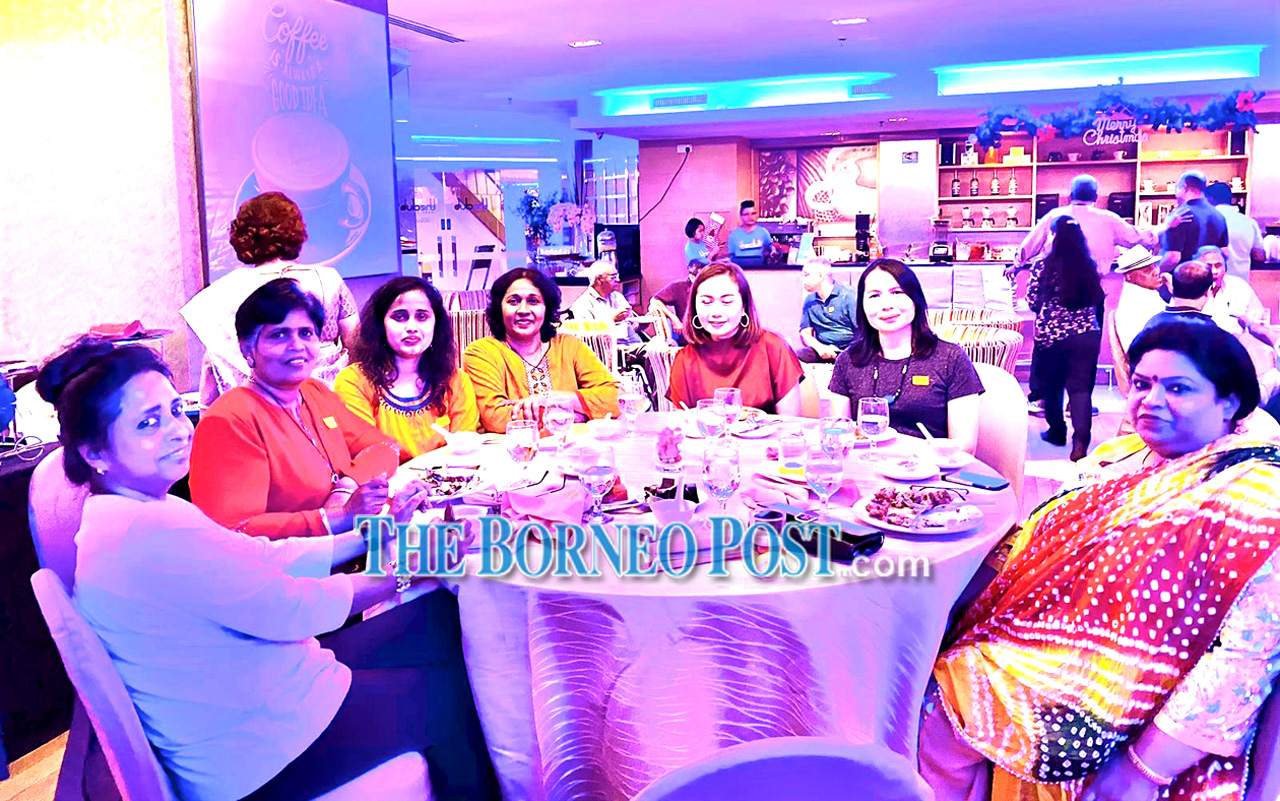 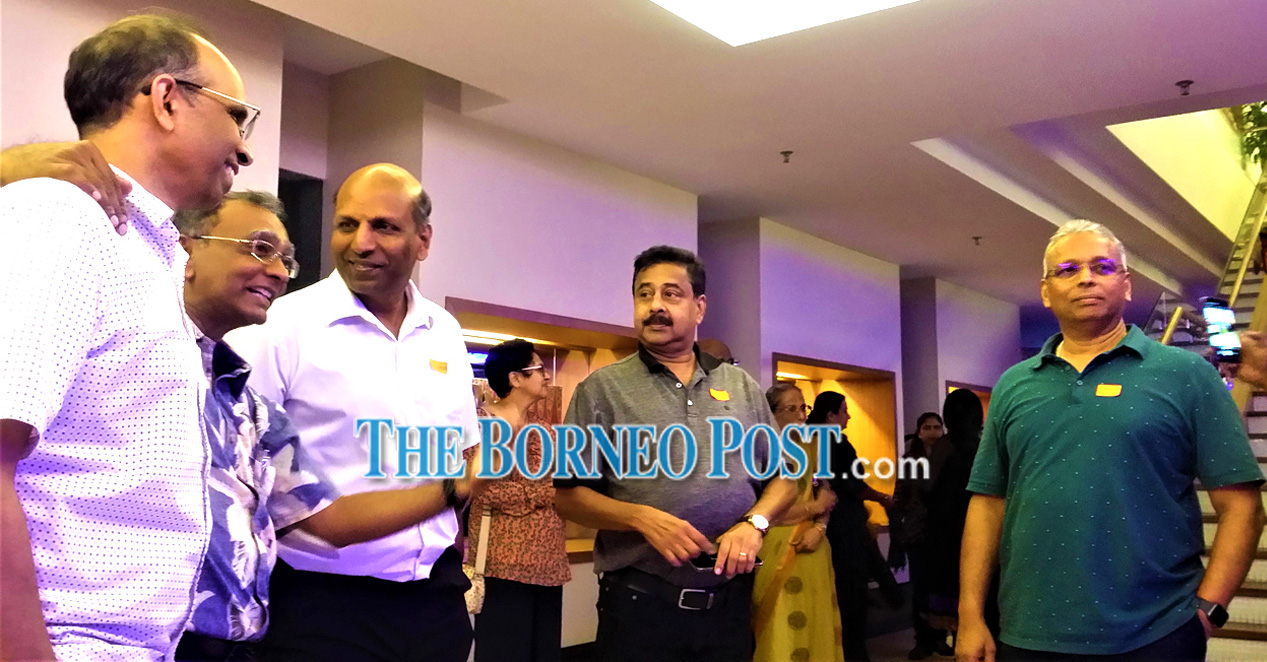 Participants catch up at the reunion.

After the reunion, many of the attendees toured Sarawak, visiting their old schools and homes, and enjoying some of their favourite foods — satay, laksa, kolo-mee, and the like.

Some expressed their gratitude to outstanding educators such as Brother Albinus O’Flaherty FSC, former principal of Sacred Heart School, Sibu, by visiting his resting place at St Joseph’s Cathedral cemetery.

Liju and George Kuruvilla, whose parents were teachers, had hoped to see the old government quarters where they stayed at Jalan Uplands in Kuching. But the quarters had been demolished not long ago. As children, they used to play around the area, which was not as populated as now.

Mathew Phillip, whose parents were also teachers, brought along his wife and son. They caught up with his old friends in Sibu, who took them on a speedboat cruise along the Rajang in true Sarawakian hospitality.

James TC Wong of Miri got to see his old classmate, Suresh, after more than four decades.

“It’s so surreal that Suresh and I met up again after 45 years. The extraordinary part was Suresh could recollect what our Form 2 English teacher, Mrs Tiong (nee Lee Sing Hua), said about my correct usage of the words ‘to fetch.’ Thank God for the meet-up and we
look forward to seeing Suresh again.”

Josh John added, “It’s good to see many childhood friends reconnecting and renewing their friendship after so long.  It’s something everyone will remember and talk about for a long time.”

After the successful reunion, another one is planned for early 2022. And the next time around, it’s hoped more people, especially those living overseas, can attend.