Tuesday, May 17
You are at:Home»News»Solat Jumaat allowed in mosques next week for mosque officials but not ‘solat sunat Aidilfitri’, says Sarawak Islamic Council 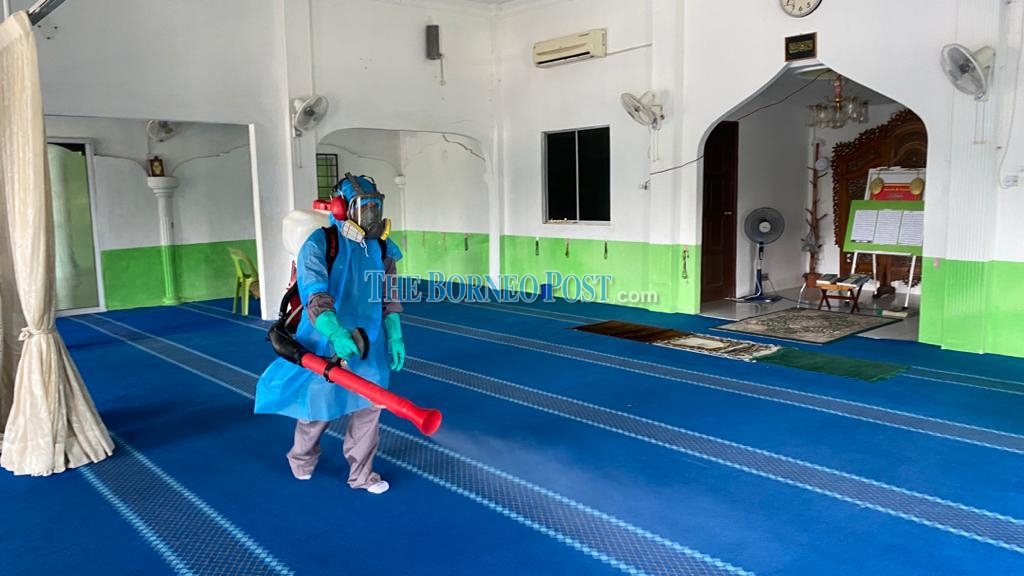 A mosque is sanitised by Bomba personnel in this file photo.

KUCHING: The ‘solat Jumaat’ or Friday prayers will be allowed in mosques and suraus in Sarawak from next week for a limited number of congregants, Sarawak Islamic Council (MIS) president Datu Misnu Taha announced today.

However, he said the ‘solat sunat Aidilfitri’ for the Hari Raya celebration expected next weekend, remains prohibited.

Misnu said the council had decided to allow the Friday prayers from May 22 for four to a maximum of 12 men and only from amongst the mosque or surau committee members or officials.

He said all other activities were not allowed.

“After studying the guidelines of the Health Ministry and National Security Council, MIS in accordance with the decision of the Sarawak Fatwa Board’s special meeting on May 11 has decided to maintain the temporary suspension of all mosque and surau activities in Sarawak including the ‘solat berjemaah’, ‘solat fardu lima waktu’, ‘solat sunat tarawih’ and ‘solat sunat Aidilfitri’,” he said in the announcement streamed live online.

Misnu stressed that the ‘solat jumaat’ must be held in accordance with the Conditional Movement Control Order guidelines issued by the State Islamic Department (JAIS), which would be available on its website.

“We are still battling the Covid-19 (pandemic) and that is why MIS has allowed the ‘solat jumaat’ but under strict guidelines,” he said.

He urged Muslims to accept that the ‘solat sunat Aidilfitri’ could not be held at this time, and urged them to hold the prayers in their own homes.

All religious and public gatherings were prohibited in the country from March 18 this year following the implementation of the Movement Control Order to stop the spread of the Covid-19 virus.