Thursday, August 6
You are at:Home»News»Sabah»Rewarding MCO for lobster farm 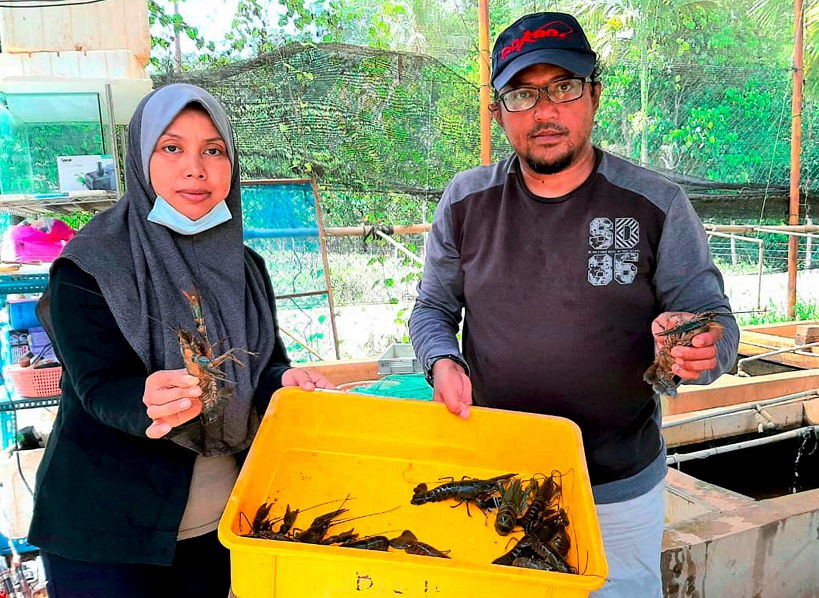 The couple showing the freshwater lobsters on their farm in Kampung Kiulu and also supply lobster larvae to other aquaculture operators. – Bernama photo

KOTA KINABALU: While many entrepreneurs have been ranting about their losses since the Movement Control Order (MCO) was enforced on March 18, lobster farm operators Susanti Aziz and her husband Shahrul Hanif Mohd Hamid have been literally laughing all the way to the bank.

The couple rears freshwater lobsters on their farm in Kampung Kiulu, about 45 kilometres from here, and also supply lobster larvae to other aquaculture operators.

Susanti said business was quite dull during the first two weeks of the MCO but it picked up after that and now almost every day they are busy catering to requests from buyers for lobsters and lobster larvae.

Susanti, 45, and Shahrul Hanif, 46, started their aquaculture venture through their company Fastharvest Aquaculture Enterprise in 2008. The couple specialises in supplying larvae of the Australian redclaw crayfish freshwater lobster species.

Susanti, who is the company manager, said during the MCO and conditional MCO, they have been getting orders for the larvae through Facebook and WhatsApp from not only Kota Kinabalu but also Tuaran, Tamparuli and other districts. The deliveries are handled by her husband.

“The higher demand is due to the fact that more people are taking up lobster farming now either as a hobby (to make use of their free time during the MCO) or as a business venture due to the lucrative income,” said the mother of six.

During the MCO and CMCO period, they have been selling between 30 to 100 lobster larvae daily. The price of each larva would depend on its size and quantity purchased.

For bulk purchases of over 100 larvae, the price ranges from RM4 to RM20 per larva and for smaller quantities, from RM5 and RM25 a larva.

Susanti said sales of their freshwater lobster have also increased with most of their customers wishing to cook and serve it as a dish for their breaking of fast meal.

Their lobster’s retail price is RM120 per kg and wholesale price, between RM60 and RM80 a kg.

Both Susanti and her husband Shahrul Hanif have attended a course in aquaculture at a skills training institute and they embarked on their venture in a small way with 1,000 lobster larvae that they bought from an operator in Sarawak.

Today, they have four ponds on their farm with about 100,000 lobsters, as well as several tanks for the larvae.

Prior to lobster rearing, the couple reared ikan tilapia and ikan keli but suffered losses of over RM180,000 at the end of 2008 when the fish died.

“Instead of feeling disheartened, we went on to rear freshwater lobsters as it has good prospects. We believed that if we work hard and sincerely, the returns will be lucrative,” said Susanti.

Realising the market potential for lobster larvae, the couple embarked on larvae production on a bigger scale in 2012.

Shahrul Hanif said the female freshwater lobster matures when it is six to seven months old and can lay eggs four to six times a year, each time releasing about 100 to 200 eggs. Lobsters that are more than a year old can yield 800 to 1,000 eggs each time they lay eggs.

According to Shahrul Hanif, it is easier to rear freshwater lobsters than freshwater fish as the former eats all kinds of food like grains, potatoes, pellets and even vegetables such as bean sprouts and aquatic plants.

However, almost 30 percent of the lobsters reared tend to die during the moulting process due to factors such as hormonal imbalances.

The lobster grows in size by moulting or shedding its shell; the crustacean undergoes the moulting process 11 times before it matures.

“When moulting takes place, the lobster becomes inactive for six to 24 hours and its shell turns into a dark colour,” said Shahrul Hanif, adding that if tanks are used to rear the crustaceans, iodide supplements can be added into the water to smoothen the moulting process.

Meanwhile, the success of its freshwater lobster and larvae rearing venture has led to Fastharvest Aquaculture being appointed as a consultant for five years (2020-2025) for the Freshwater Lobster Production-Green Aquaponics Perennial System project initiated by the Bumiputra Agenda Steering Unit (Teraju) under the Prime Minister’s Department and Universiti Teknologi MARA’s Sabah branch.

“As part of this project, we will help to train five selected entrepreneurs to carry out aquaculture activities,” said Susanti, who is also secretary of the Association of Sabah Bumiputera Small and Medium-Sized Industries.