Friday, August 7
You are at:Home»News»Sabah»RM3.5 mln to repair Inanam sinkhole 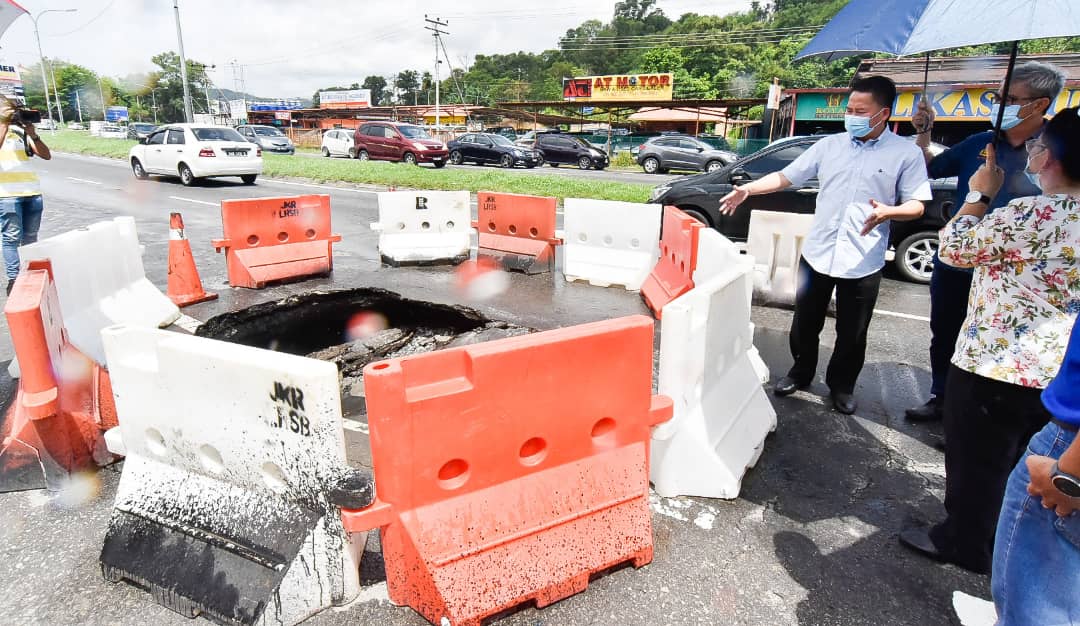 Peter (right) inspects the sinkhole at a main road near Inanam.

KOTA KINABALU: A 500-metre deep sinkhole along Kilometre 7.5, Jalan Inanam would require up to RM3.5 million to repair.

Minister of Infrastructure Development Datuk Peter Anthony said the problem was not new and had happened before in nearby areas.

“We have repaired a similar problem near here and now it has happened again. This problem involves the sewage system and it needs to be solved immediately.

“This is an ongoing problem which has been happening for a long time; we’ve brought it up at both the state and federal levels. We’ve made plans at the ministry level and it has been approved in the 12th Malaysia Plan (RMK12),” said Peter, when met at the site of the sinkhole.

He added that the ministry would look for new methods to obtain the funds to repair the sinkhole, as it was not only causing traffic congestion but also affected the drainage channel to Inanam Lagoon.

“As for a longterm solution, the drainage system in Kota Kinabalu, which spans nine kilometres, needs to be upgraded. This drainage channel has been in place for over 40 years, comprising many pipes which have eroded,” said Peter.

Nonetheless, he emphasised that the current priority is to repair the sinkhole and repair work for the drainage channel would have to use other methods. According to him, the sinkhole and drainage problems have been discussed by the government.

“Our pipes are old and the time has come for them to be replaced. I hope that with repair works on the drainage channel, it would solve existing problems,” said Peter.