Saturday, June 6
You are at:Home»News»Amphan barrels towards Bangladesh, India 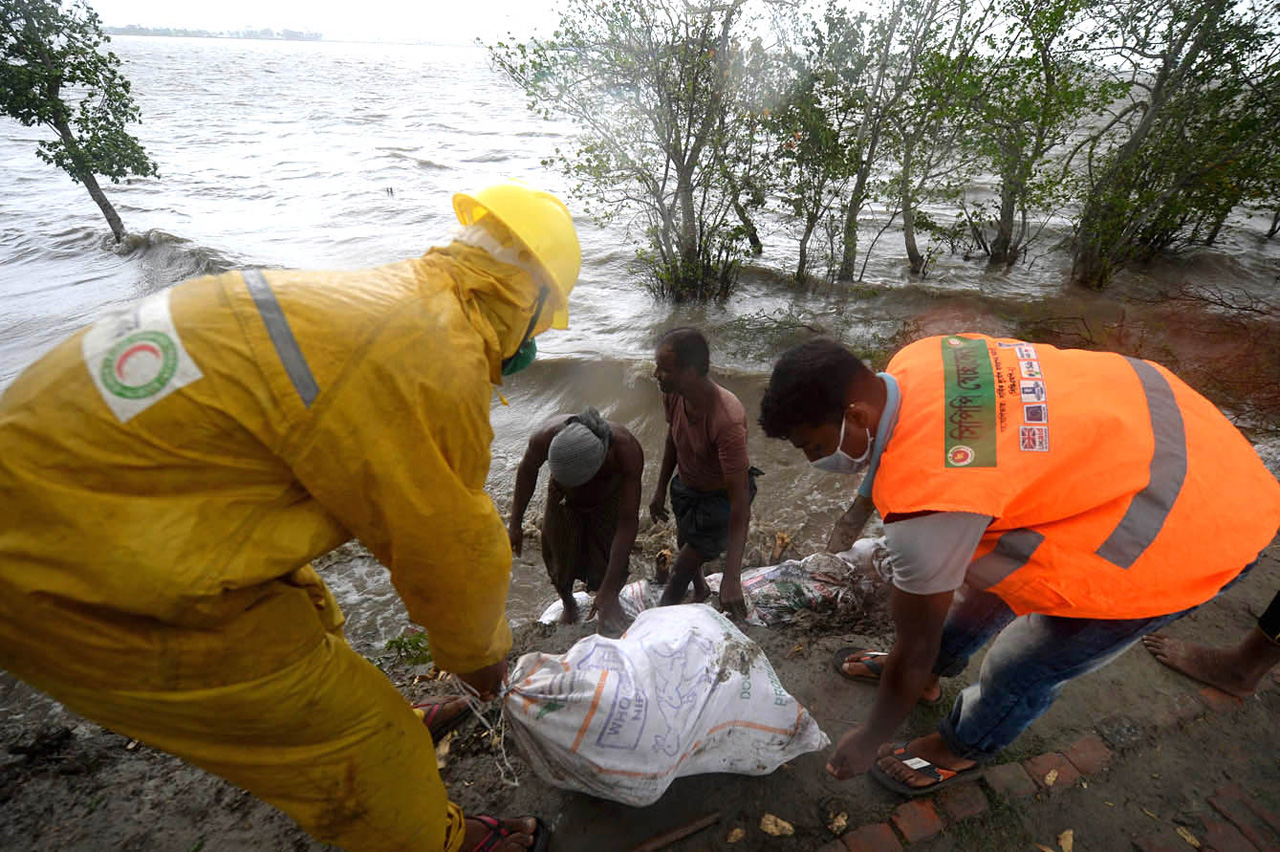 Workers and villagers reinforce an embankment with sacks of soil ahead of the expected landfall of cyclone Amphan, in Dacope. — AFP photos

KHULNA, Bangladesh: Several million people sheltered and prayed for the best yesterday as one of the fiercest cyclones in decades roared towards Bangladesh and eastern India, with forecasts of a potentially devastating and deadly storm surge.

Authorities have scrambled to evacuate low lying areas in Amphan’s projected trail of destruction, only the second ‘super cyclone’ to form over the Bay of Bengal since records began.

But their task is complicated by the need to follow precautions to prevent the spread of the coronavirus, with infection numbers still soaring in both countries and hospitals struggling to cope.

“At least 50 people took shelter in my concrete-built house,” said Abdur Rahim, a Bangladeshi shrimp farmer on the edge of the Sundarbans mangrove forest in the projected path of the storm.

“There is panic. The women are worried,” he told AFP. “A few months ago Cyclone Bulbul smashed our village, destroying at least 100 homes. We hope Allah will save us this time.”

At midday (0630 GMT) the vast vortex — visible from space — was 125 kilometres offshore and forecast to slam into the coast in the afternoon or evening.

Gusts of 185 kilometres per hour were predicted when it does, the Indian Meteorological Department said, the equivalent of a Category Three hurricane, with a storm surge of several metres.

Bangladeshi forecasters said it would hit around 6:00 pm, predicting a surge of seawater up to five metres high.

Such walls of water can cascade several kilometres inland, and are often the main killers in any cyclone, typhoon or hurricane.

The Indian met office warned of possible flying objects, ‘extensive’ damage to communications and power lines, and trees being ripped out of the ground by the wind. 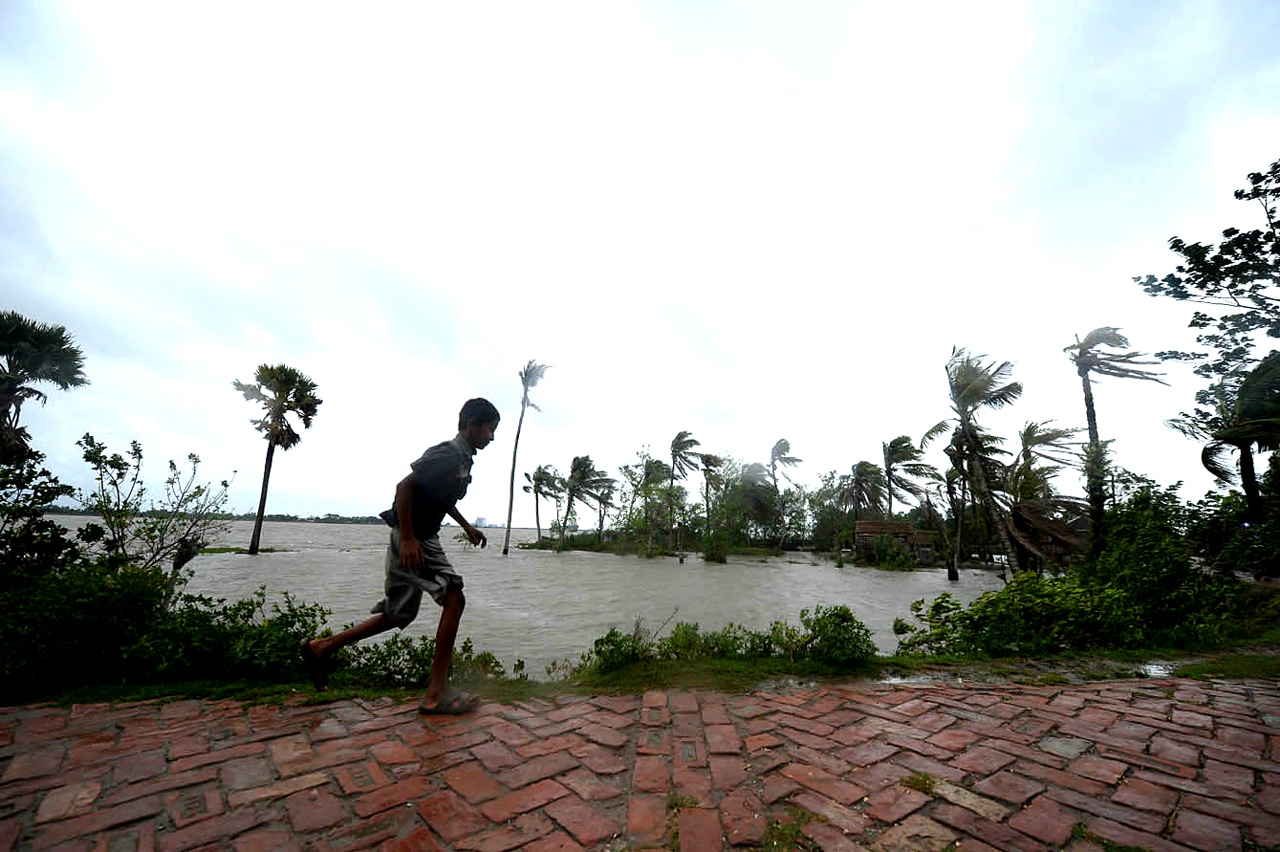 A boy runs along an embankment ahead of the expected landfall of Amphan, in Dacope, Bangladesh. – AFP photo

Kolkata was battered by heavy rain and the muddy Hooghly river was rising under dark skies, while in the coastal resort of Digha, large waves were pounding the shore.

“There is strong wind and it’s raining. Scores of trees and electric poles have been uprooted,” hotel owner Partha Tripathi told AFP by phone.

Bangladesh’s low-lying coast, home to 30 million people, and India’s east are regularly battered by cyclones that have claimed the lives of hundreds of thousands of people in recent decades.

The eastern Indian state of Odisha was hit by a super cyclone that left nearly 10,000 dead in 1999, eight years after a typhoon, tornadoes and flooding killed 139,000 in Bangladesh. In 1970, Cyclone Bhola killed half a million.

While the storms’ frequency and intensity have increased — a phenomenon blamed partly on climate change — deaths have fallen thanks to faster evacuations, better technology and more shelters.

But Bangladesh authorities still fear that Amphan will be the most powerful storm front since Cyclone Sidr killed about 3,500 people and causing billions of dollars in damage in 2007.

The country has been feverishly working to bring 2.2 million people to safety, while India has relocated around 400,000 others. 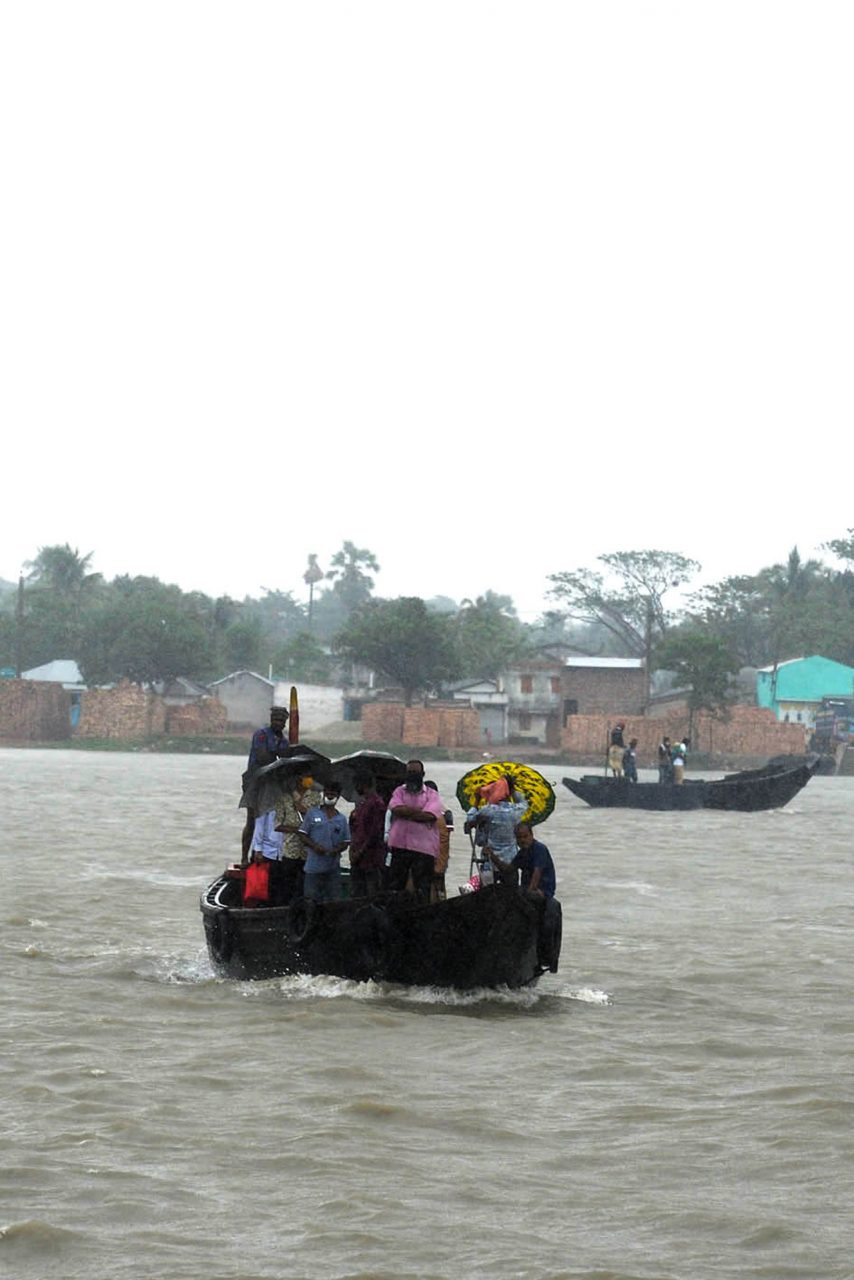 People cross a river on a boat ahead of the expected landfall of cyclone Amphan, in Khulna, Bangladesh.

Because of coronavirus, authorities in both countries said that they were using extra shelter space to reduce crowding, while also making face masks compulsory and setting aside isolation rooms.

Sulata Munda, a tribal villager in Bangladesh where Amphan was forecast to make landfall, said she and fellow villagers had decided not to go to a shelter because of the risk.

“We fear the cyclone, but we also fear the coronavirus,” the mother of four told AFP. “If needed we will move later.”

Although outside Amphan’s predicted path, there are fears for the almost one million Rohingya refugees in southeastern Bangladesh — most living in flimsy, makeshift shacks.

The first coronavirus cases were reported in the teeming camps last week, and by Tuesday there were six confirmed infections.

The UN said food, tarpaulins and water purification tablets had been stockpiled, while authorities said the refugees would be moved to sturdier buildings if needed.

“We are fully prepared. But right now, there is no need to take them to cyclone shelters,” said Mahbub Alam Talukder, Bangladesh’s refugee commissioner.

There were also fears for some of the hundreds of Rohingya thought to be out at sea in rickety boats that have been denied entry by Thailand and Malaysia in recent weeks because of coronavirus restrictions.

“Heavy rains, flooding (and) the destruction of homes and farmland will increase the likelihood of the virus spreading, particularly in densely populated areas like the refugee camps in Cox’s Bazar,” ActionAid said.

“It will also undoubtedly increase the number of lives and livelihoods already lost to this pandemic.” — AFP