Saturday, July 11
You are at:Home»News»Sibu’s stage buses to resume service next Monday with RM1 fare 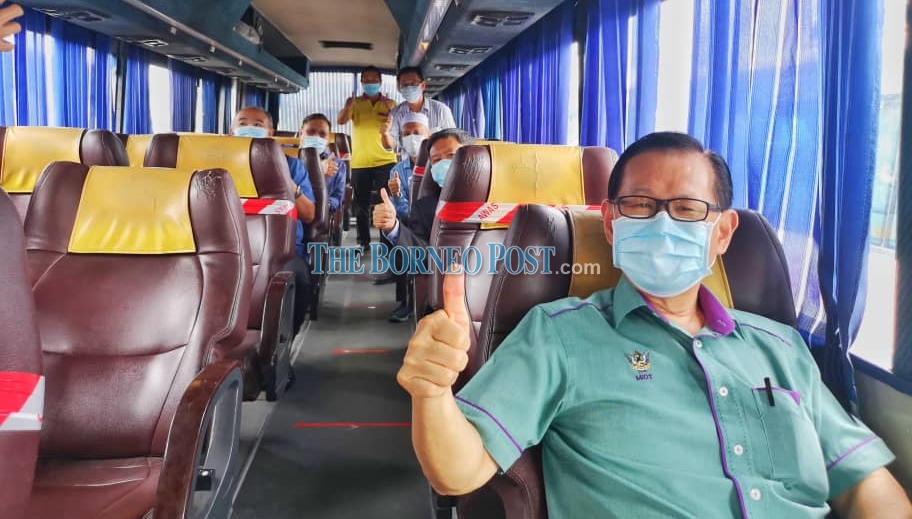 Lee gives his thumb’s when taking ride on a stage bus.

State Transport Minister Datuk Lee Kim Shin when contacted by The Borneo Post today, said the date for resumption of the stage bus service was proposed by the bus companies here.

“May 25 (to resume stage bus service) as proposed by the (bus) companies (here),” he disclosed.

On Wednesday, bus companies here had proposed at a meeting with state Transport Ministry and Sibu Division Disaster Management Committee that they be allowed to resume next Monday.

Meanwhile, asked if the state Transport Ministry is still awaiting proposal from bus companies in Sarikei on when to resume operation there, Lee replied in the affirmative.

“Yes. They have to notify Sarikei DMC (Divisional Management Committee),” he said.

The State Disaster Management Committee had recently decided that urban stage bus services can resume in green and yellow zones, which included Sibu, after being shutdown for some two months following the imposition of the nationwide Movement Control Order (MCO).

He anticipated that there will be a good response from members of the public due to the low fare.

“Maybe for the first two week, not many people will be using (stage bus service) as they are reluctant to go out due to the concern on Covid-19.

“But, over time, the response to the stage bus service will improve,” added Lau, who is also Lanang Bus Company Bhd chairman.

He pointed out seating arrangements in the buses will be made to allow for social distancing.

Lau estimated that there will be about 40 stage buses from four bus companies here that will be in operation if the stage bus service here operates in full swing next week.

“I think stage bus is very convenient as members of the public need not drive their own cars to town and this will go a long way to ease traffic congestion in town areas,” Lau opined.