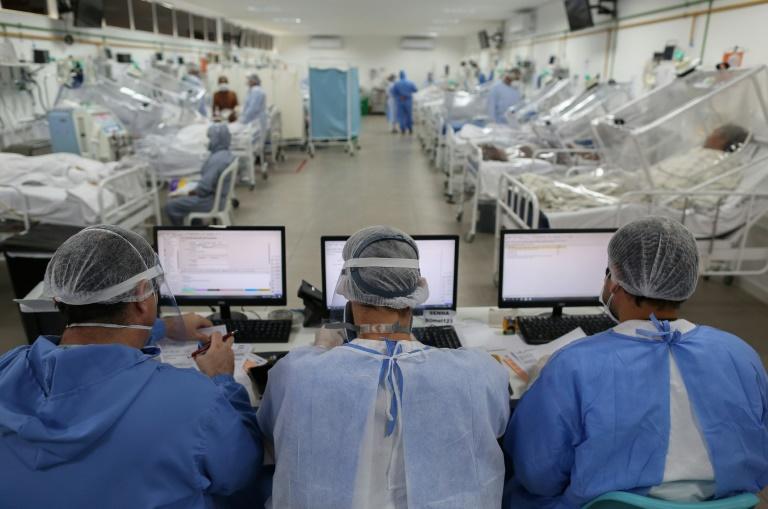 Brazil has emerged as a coronavirus hotspot, and has the third highest number of cases globally after the US and Russia. AFP Photo

Global infections from the novel coronavirus passed five million on Thursday as the pandemic played out unevenly across the planet, with China eager to declare a victory, Europe tentatively emerging from its shell and deaths still rising in hotspots in Latin America.

The grim milestone comes after known cases of COVID-19 doubled in just one month, according to AFP data collected from official sources, with the death toll now topping 328,000 worldwide.

While many hard-hit European countries have significantly turned the tide on new infections and fatalities, Latin America is in the grip of an infection surge.

Brazil is leading the pack, logging the third-highest number of cases in the world after the US and Russia.

Peru, Mexico and Chile have also seen steady increases in infections, with nurses in Lima warning that the health system is on the brink of collapse after cases and deaths tripled over the past three weeks.

“It’s like a horror film,” Miguel Armas, a nurse at the Hipolito Unanue hospital in the capital Lima, told AFP.

“Inside it seems like a cemetery given all the bodies. Patients are dying in their chairs (or) in their wheelchairs.”

And like US President Donald Trump, he has promoted the use of anti-malaria drugs against the virus despite studies showing they have no benefit and could have dangerous side effects.

Trump, for his part, insists the US is “Transitioning back to Greatness” as states reopen at different speeds.

His optimism cut a sharp contrast with the bleak health situation in the country, which leads the world in cases and deaths.

While daily death tolls are no longer on a steady incline, the losses are still punishing with more than 1,500 additional fatalities reported in 24 hours on Wednesday, bringing to the total number in the US to more than 93,400.

On the economic front, the latest figures out of the US showed the rate of unemployment slowing — but the total number of jobs lost since mid-March stood at an eye-watering 38.6 million.

Trump, who is desperate to boost his political fortunes ahead of November elections, has also doubled down on his finger-pointing at China, who he blamed for “this mass Worldwide killing”.

Beijing tells a different story, with President Xi Jinping determined to project a narrative of strength and success in reining in the outbreak that first emerged in his country late last year before wreaking havoc around the globe.

Though China has faced criticism of its initial handling of the virus, the country has since brought domestic cases down to a trickle and kept deaths at a far lower toll than in the worst-hit countries, according to its official figures.

In the latest symbol of normalisation, on Thursday China opened its biggest political event of the year — the Chinese People’s Political Consultative Conference (CPPCC) — after months of delay over coronavirus fears.

Analysts say the gathering will be a chance for the party to reaffirm its narrative of beating the virus and coming to the aid of other countries with masks and other medical shipments.

It “will likely be an occasion for Xi Jinping to declare complete victory in the ‘people’s war’ over the virus”, Diana Fu, a professor of political science at the University of Toronto, told AFP.

As governments pray for an end to the economic strangulation from shutdowns, the race to develop a vaccine has been buoyed by experiments on monkeys that offered hope that humans can develop immunity to the virus.

The US also pumped an additional $1 billion into the British pharmaceuticals group AstraZeneca to help fund the production of a vaccine.

In the meantime, many countries are testing ways to live with the dangers in the interim.

In Spain, which is emerging from one of the world’s toughest lockdowns, face masks have been made mandatory for anyone aged six and over in public where social distancing is not possible.

“It gives me a sense of security,” Cristina Quevedo Jorquera, a 47-year-old school teacher in Madrid, said of the mask requirement.

“There will be contagion even with a mask, but without a mask it’s like jumping into a pool without knowing how to swim”.

With many other European countries also gradually awakening from lockdowns, the economic collapse in the eurozone has “likely bottomed out” with the rate of decline now easing as economies creak open, according to a survey by IHS Markit.

Elsewhere, Cyprus bounded into its second stage of de-confinement Thursday, lifting curfews and allowing outdoor restaurants, barber shops and beaches to open on the Mediterranean island, though airports and hotels remain closed.

In reopened cafes, customers were seated outdoors with spacing between tables, while some ate with plastic face shields still on.

“I’d normally never drink beer at lunchtime but it’s good, it feels kind of like back to normal, you know?” said Jim Hall, a 70-year-old who popped inside a pub for a midday refresher.

“We’ve done the hard yards and this is the reward,” he said between sips of stout.

Yet some fear lockdowns are loosening too fast in places like Tanzania, whose government announced it would resume university life and sporting events on June 1 even as the US embassy warned virus was spreading exponentially in the East African nation.

And in Asia, some experiments in adjusting to the new normal have gone awry.

Not everyone was amused in Singapore by a yellow robot dog deployed to patrol a city park and monitor social distancing.

The remote-controlled hound uses cameras to estimate the number of visitors and blasts out a message to remind joggers and walkers to stand at least one metre apart.

“I think it’s really going to be chilling in a way — something is looking around and I’m not sure how it’s going to react to me when I go near it,” local resident Simon Neo told AFP. – AFP