Wednesday, July 8
You are at:Home»News»3 major projects in Limbang delayed due to Covid-19 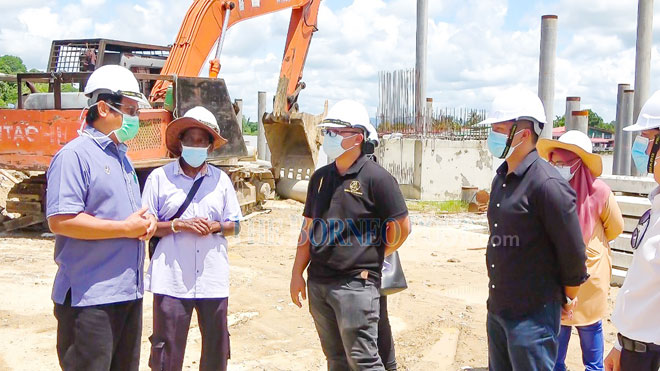 Dr Abdul Rahman (left) being updated on the progress of the phases 1 and 2 of the Limbang Waterfront upgrading work.

“Considering all these factors and after discussions with the contractors involved we have agreed to give the new date for completion of these projects  as the people’s health and safety are of prime importance to prevent the spread of Covid-19.

“For example, the first phase of Limbang Waterfront project is six months behind schedule. It is supposed to be completed in July but it is now expected in December,” he said after visiting phases 1 and 2 of the project site on Thursday.

As for the second phase, he said there was a slight delay of about 1.6 per cent, but he is confident it could be completed in July next year.

Dr Abdul Rahman, who is also Bukit Kota assemblyman, said another delayed project is the overhead bridge connecting Pulnama Hotel, Tamu and Limbang Malay Association building. The overhead bridge is supposed to be ready by July. Now it is expected in September.

“Generally, we are happy with the projects despite the delay in the implementation.

“Nevertheless, the contractors concerned have been urged to expedite the completion of these projects to help boost the local economy,” he said.