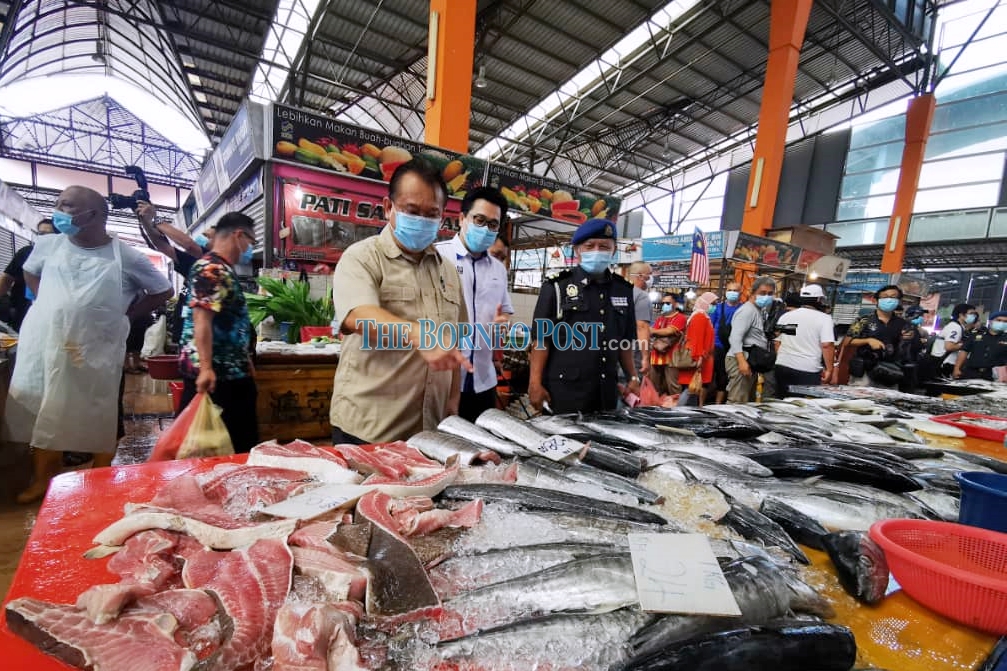 Nanta inspects the stalls at the Satok Market this morning. Also seen is Tan (second left). Photo by Roystein Emmor

Nanta said this was mainly due to the unprecedented Covid-19 pandemic, which has led to a slow market.

“They (traders) are also human and need to survive and earn some income for the festive season. On the other hand, consumers also need them for the goods that they are selling,” Nanta told a press conference after visiting the Satok Market this morning.

Nanta, who is also Kapit MP, said the scheme will also enable traders, especially those involved in the fresh meat industry, to revive their business.

“Due to the Movement Control Order (MCO), there is a weak demand for fresh meat due to the closure of restaurants and food outlets,” he added.

On another note, he also acknowledged traders in Sarawak for being disciplined and sticking to the ceiling price under this year’s scheme.

“Some of the traders here (Satok Market) even managed to sell their goods such as potatoes and beef below the scheme price,” he added.

This, he said, reflects the trader’s ethical and positive response to the scheme which augers well for consumers.

Meanwhile, Nanta also expressed disappointment on how he felt that the scheme had been “politicised” by opposition leaders at the federal and state level.

“I dont want to be dragged into and dwell into the political part of this. The ministry has done what is needed to suit the current situation,” he added.

He added that this year, the ministery has increased the number of controlled items by 35 as compared to 27 items by the PH government in 2019.