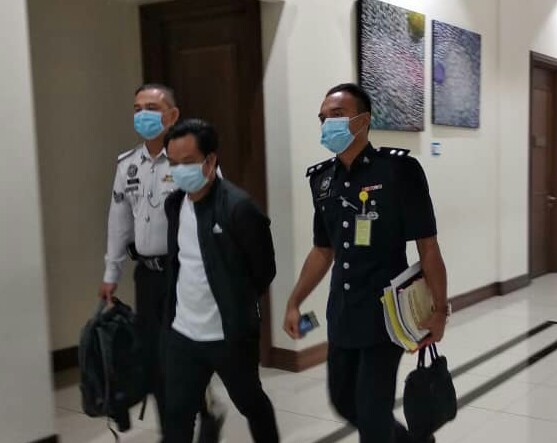 Jeffray (middle), seen with Inspector Firdaus (right), was granted a stay of execution pending his appeal to the High Court.

KOTA KINABALU: The Traffic Court here yesterday sentenced a man to three years in jail plus a RM6,500 fine, in default, two months’ jail for reckless driving which caused the death of a motorcyclist and his daughter four years ago.

Magistrate Stephanie Sherron Abbie imposed the sentences on Jeffray Katoh, 36, after finding him guilty of a charge under Section 41 (1) of the Road Transport Act 1987
The charge is punishable by a jail term of up to 10 years and a fine of up to RM20,000, upon conviction.
Apart from that, the court also revoked the accused’s driving licence.
However, the magistrate allowed his application for a stay of execution, pending his appeal to the High Court here.
The accused was released on RM1,000 bail with two local sureties, pending disposal of the appeal.
The accused was convicted of recklessly driving a car which had caused the deaths of the 53-year-old man and his 23-year-old daughter at Jalan Politeknik Sepanggar near Salut Commercial Centre at 6.20am on May 27, 2016.
In mitigation, counsel Henry Gudid, who represented the accused, pleaded for a lenient sentence saying that the accused only earns a living by doing part-time job while his wife is not working.
In reply, prosecuting officer Inspector Mohd Firdaus Che Mustafa suggested higher sentence and applied for revocation of the accused’s licence.

The prosecution submitted that based on the facts of the case the accident was the worst as it claimed the lives of both the father and his daughter.

The prosecution further submitted that at that time the accused was a “P” licence holder and one of the victims had served as a policeman for 30 years.

The prosecution had called seven witnesses to testify against the accused and the defence had two witnesses, including the accused.