Thursday, January 27
You are at:Home»News»25 motorcyclists compounded for travelling from Samarahan to Simunjan during CMCO 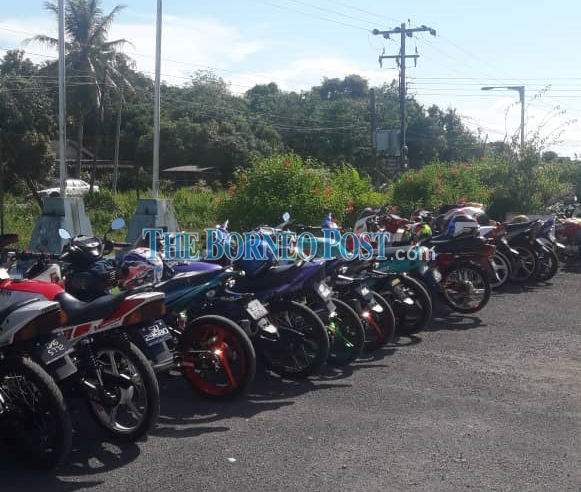 The suspect’s motorcycles were brought to the Simunjan district police headquarters for further action.

KUCHING: A group of 25 motorcyclists were each slapped with compounds when they were found to be travelling from Kota Samarahan to Simunjan yesterday.

Sarawak Deputy Police Commissioner Dato Dev Kumar in a statement said among them was a police personnel from the Kota Samarahan district headquarters.

“The motorcyclists were stopped by a police team who were conducting a snap check at KM1 Jalan Tun Openg, Simunjan at around 2pm,” said Dev.

He added the group was believed to be heading to Kampung Nanas, Simunjan after stopping by at the district’s town centre.

None of the suspects, whom are all from Kota Samarahan, he revealed, managed to produce their inter-district travel permit during the check.

“The suspects also failed to provide police with a reasonable excuse as to why they were travelling to Simunjan on their motorcycles,” he added.

All suspects were later brought to the Simunjan district police headquarters where each of them were slapped with a compound for offences under the Prevention and Control of Infectious Diseases (Measures Within Infected Local Areas)(No. 6) Regulations 2020.

“At the station, the suspects later admitted that they were out for a joy ride from Kota Samarahan to Simunjan after not being able to ride their motorcycles for quite sometime,” he added.

After receiving their compounds, the suspects were told to return to Kota Samarahan via the Sadong bridge.

Previous ArticleFirefighters save couple after they start fire outside bedroom in Kota Samarahan
Next Article Brother of Covid-19 patient furious with false accusations on Facebook, lodges police report