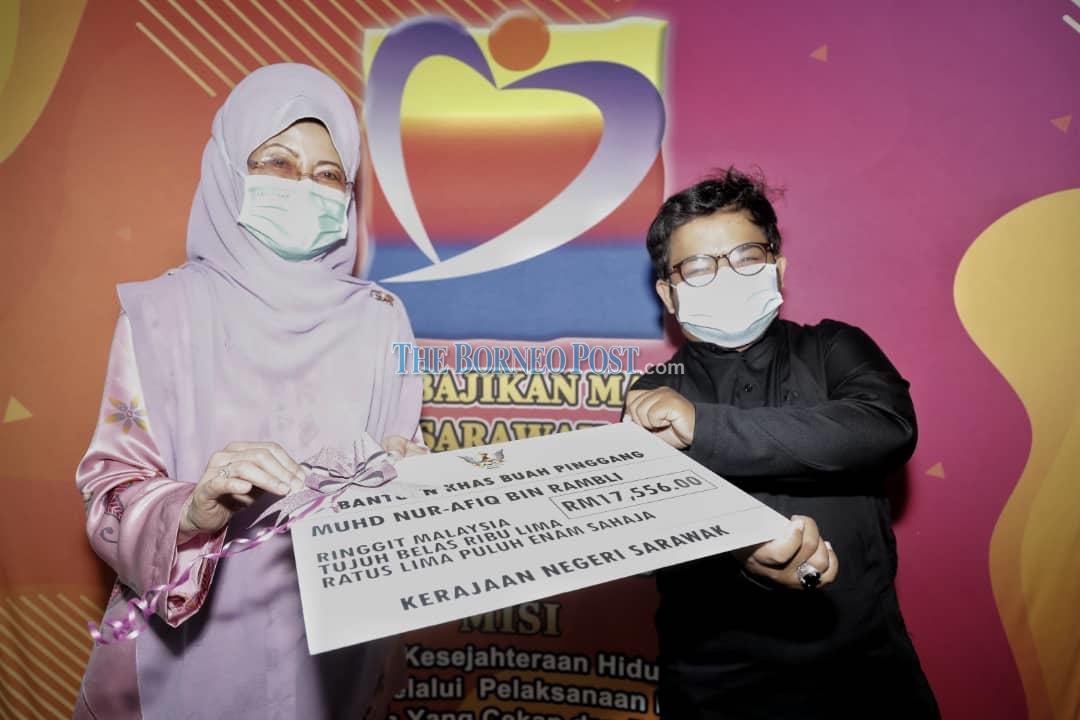 Fatimah (left) presents the mock cheque to Nur-Afiq. Photo by Chimon Upon

KUCHING: Sarawak recorded 3,317 kidney patients with 2,920 of them undergoing hemodialysis based on the 2018 data from the state Health Department, said Dato Sri Fatimah Abdullah.

The Minister of Welfare, Community Wellbeing, Women, Family and Childhoold Development said while 275 of them underwent Continuous Ambulatory Peritoneal Dialysis (CAPD), 122 others had undergone kidney transplants.

She handed over a special aid worth RM17,556 to kidney patient Muhd Nur-Afiq Rambli during the event.

According to Fatimah, among the major causes of kidney failure are diabetes, hypertension and obesity.

She said 65 per cent of those undergoing dialysis treatment were also diabetic.

“Hemodialysis treatment takes not more than five hours and is conducted three times a week. For CAPD, it is four times a day.”

Under the MoH, there were 314 hemodialysis machines and 112 of them had been in use for more than eight years, and needed replacement, she pointed out.

She was pleased to note that MoH had been granted RM6 million a year for the replacement of hemodialysis machines throughout the country.

“The majority of these treatment centres operate on three shifts a day and a machine is capable of treating five to six patients per shift.”

Fatimah said Sarawak had seven nephrology specialists, recording a nephrologist-patient ratio at 1:338 compared to the national ratio at 1:237.

At the national level, she said 31 per cent of patients received hemodialysis treatment at government facilities while 21 per cent had treatment at those operated by NGOs and 48 per cent at private ones.

Previous ArticleCMCO: Putrajaya gives nod to three churches in Bintulu to reopen from June 10
Next Article PSB racially diverse party with best interests of all in mind, says Wan Abdillah