Saturday, May 28
You are at:Home»News»Dog that bit 5-year-old boy in Sibu confirmed to have rabies 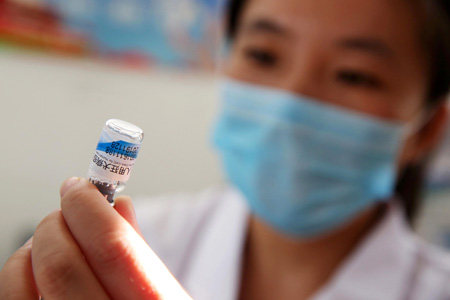 A nurse prepares a rabies vaccination in this file photo. AFP File Photo

Dr Adrian disclosed this when questioned about the outcome of the sample obtained from the animal which was sent to the State Veterinary Diagnostic Laboratory (SVDL).

“The dog tested positive for rabies,” he said.

Sibu Rural District Council secretary Justani Joni said in a recent statement that they received a call from Sibu Hospital on Monday (May 25) notifying them of a dog-bite case involving a five-year-old boy.

Hesaid the council received the same information from Ministry of Local Government and Housing.

According to Justani, the case reportedly happened at about 3pm last Sunday (May 24) which involved a boy who had been bitten by a family dog.

Sibu Divisional Health Officer Dr Teh Jo Hun had said the dog died the following day after it bit the boy.

The boy had already been vaccinated, he said.

Dr Teh said the dog was a free-roaming pet.

SRDC deputy chairman Councillor Robert Lau had advised owners to take their pets to be vaccinated once a year.

“And don’t adopt strays as pets unless they are vaccinated and quarantined for 14 days too.”

He lamented that Sibu Jaya too had stray dogs despite several operations carried out a few months ago to catch the animals.

Residents and coffee shop owners are advised not to feed strays but to report them to SRDC, Lau said.

Meanwhile, on March 8, a five-year-old girl at Jalan Sentosa here was attacked and bitten by a stray dog on her face, mouth and eyelids.

Health director-general Datuk Dr Noor Hisham Abdullah had said in a recent statement that the bite wounds were not washed with clean water and soap immediately after the incident.

The Health Ministry had confirmed that the girl’s death on March 26 was due to rabies.