Sunday, July 5
You are at:Home»Columns»Of aliens, blackened faces, and mixed spirits at past Gawais 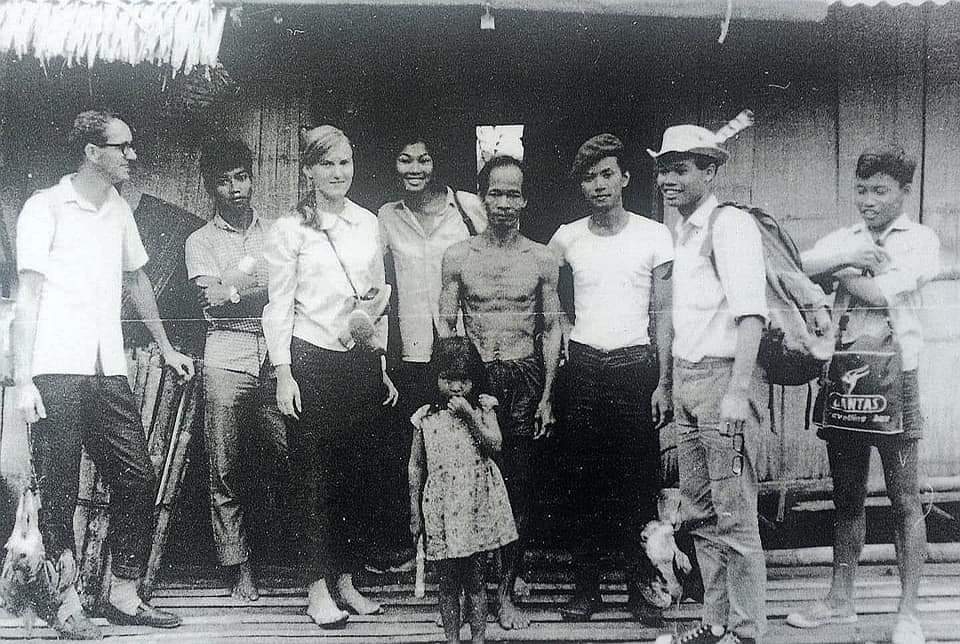 Visit to a Kukus Kiding Gawai in 1967 with Fred Black, Irene Brodie, Beno Asau, and Carrot Ripid. The writer is at third right.

LAST week, I reminisced about my past Hari Raya visits since a very young age; today as it’s just two days away from Gawai Dayak on June 1, I feel it’s timely for me to recall some of my many memorable Gawai visits from the past. They’re even more exciting as all of them were spirit filled in every sense of the word!

For the uninitiated and novice not from Sarawak reading this, Gawai Dayak is an annual festival celebrated by the Dayak people of Sarawak and West Kalimantan on June 1-2. It has been a public holiday in Sarawak since 1965 – marking thanksgiving for bountiful harvests, which has become likened to a Dayak New Year. In neighbouring Sabah, Kaamatan, a similar harvest festival is celebrated there on May 30-31 annually.

There is some history behind it: first mooted by radio producers Tan Kingsley and Owen Liang, the British colonial government at the time only recognised it in 1962; the following year on June 1, 1963 Datuk Michael Buma, a native of Betong, hosted the first Gawai Dayak at his home at Siol Kandis, Kuching. It was only two years later that, after much lobbying by Datuk Barbara Mendu Bay and Dato Sri Tra Zehnder, it became an official holiday in 1965.

During our school days from the 1950s to the late 1960s, there wasn’t much differentiation between the different Dayak communities; we treated Dayak as one large group of Sarawak citizens on equal footing with the Malays, Chinese, Indians, and others. Indeed it was only much later towards the late 1980s that Dayak nationalism spread through the many political parties and groups of clan associations that the Dayaks had wanted to be identified individually as Iban, Bidayuh, Kayan, Kenyah, Lun Bawang, and so on. There are over 200 riverine and hill-dwelling ethnic sub-groups in Sarawak; each having their own dialects, customs, laws, territory, and culture.

From the days of the White Rajahs, the Dayaks had practised animism and paganism but in recent times many have converted to Christianity; a few have become Muslim through marriage.

When I was 17 in Form 5, our geography teacher from Australia Fred Black brought a small group of us to spend a long weekend Gawai visit to the Kukus Kiding mountain range, where we had visited classmates Beno Asau and Carrot Ripid. It was a very steep and mountainous trek. Upon arrival at our first homestead right at the top of the range, we were greeted by the womenfolk and had all our faces rubbed and covered with soot from their cooking pots; much soot was available as they only used firewood for their cooking! Unfortunately those photographs have disappeared in the annals of my personal history. Apparently it was their tradition of greeting friendly first time visitors!

Sometime in the late 1980s with a group of close friends from my church, St Faith’s, including the late Ken Goh, Faye, and family, we took a road trip to the then Second Division to pay a visit to the longhouse of Datuk Edmund Langgu at Rumah Ulak Sungai Kelampai in the Saribas. The road journey took more than five hours and the road at that time was pretty bad, but we made it.

At Datuk Edmund’s we were treated, at around mid-morning, to an amazing assortment of home made kuih, snacks, and lots of alcoholic beverages, ranging from the traditional basin full of home made tuak, to the purer and more potent langkau, and eventually to Datuk’s private stash of Johnny Walker whisky and Hennessy cognac! Even for someone rather used to such a mixture of various beverages, I was feeling pretty tipsy after countless rounds — it appears that as a guest and if you can drink, you’re not allowed to say, ‘No’. Maybe they made that up just to make guests drink more!

Again, as customary, we were invited to every single bilek (room/home) in the entire longhouse, numbering no less than 24 or something akin to that. It was told to us that it would be rude to decline or refuse. So visit we did. There was more drinking, unfortunately only two of us were drinkers and we carried the load for the rest.

I woke up on the ruai (the long corridor) of the longhouse among four or five of their pet mongrels, and my wife told me that Ken’s five-year-old daughter Rachael was much aggrieved and almost in tears asking if I had expired on the floor of the longhouse. We spent the night at a small hotel in Simanggang on the way home.

On another occasion during another Gawai, when I was working with Sebor Sarawak, work colleague William Howell had invited us to visit his longhouse at Rumah Kion (now Rumah Joel) at Bijat Ali, Tanjong Bijat in Simanggang. The journey was full of adventure, in the mid 1990s there was basic 2G cellphone service; we were using those antique Sapuras and beyond the town limits they were totally useless. We got lost so many times by taking wrong turns here and there; at one stage we had to drive along a narrow hard mud path only big enough for a single car, in between two huge fish ponds. To say the homestead was very remote was being polite.

Eventually, we arrived there as they were in the thick of their celebration; one could virtually smell the fumes of the tuak and langkau vapours hanging in the hot stillness of the dry hot longhouse air as we entered. After the welcoming committee of the Tuai Rumah, we were all seated down, cups of langkau and local snacks in hand; TR Kion decided to take the floor to make a welcoming speech — when translated William told us he bid his warmest welcome to “the very first aliens” to ever visit them at this longhouse during Gawai; for they had never any visitors before us. We were very pleased as indeed we had almost given up hope of ever arriving there in the first place.

For the rest of our visit, we were treated like government ministers arriving during election campaign season!

I have always enjoyed my time with family members (we have in the Ong family many inter-racial marriages) and friends during Gawai visiting and the feeling of harmony, love, and camaraderie has always prevailed and will I pray continue to be so.

I would like to wish all my family and friends celebrating the Gawai festival, although under very restricted conditions due to the CMCO, a happy, peaceful, healthy, and prosperous Happy Gawai.