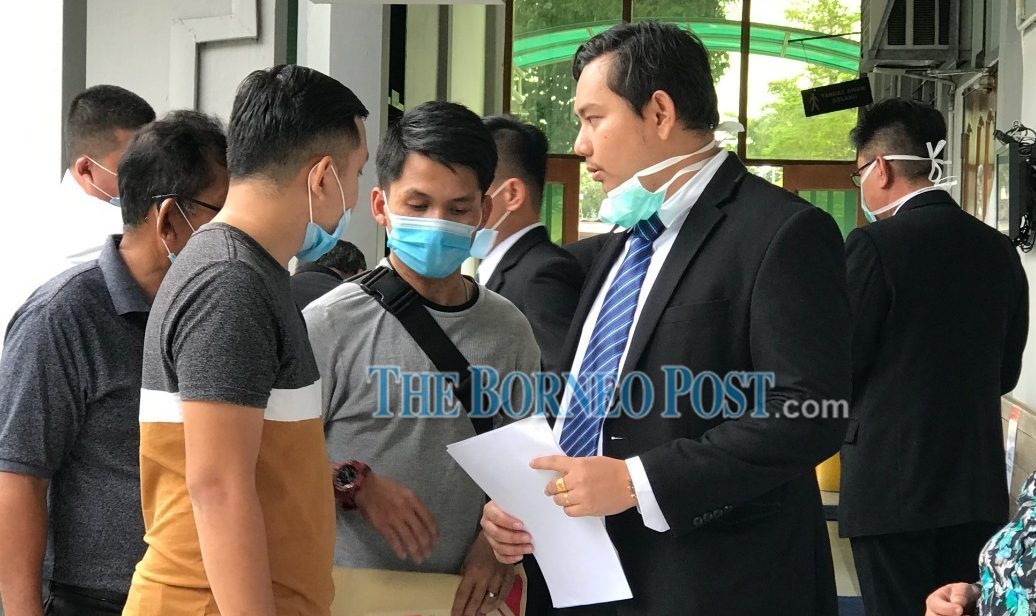 Jeffery (centre) outside the court after the proceeding today.

SIBU: A 27-year-old man, who violated the home quarantine order for a bowl of ‘kampua’, was fined RM5,000 in default five months jail after he pleaded guilty in the Magistrate’s Court here today.

Jeffery Jambo Dana was charged under Section 22(b) of the Prevention and Control of Infectious Diseases Act 1988, punishable under Section 24(a) of the same act which carries an imprisonment term not exceeding two years or to a fine or to both upon conviction.

According to the charge, Jeffery had violated the order on May 25 at about 9.30am at a coffee shop at Sibu Jaya. He also uploaded pictures of him having the noodles on Facebook and the post later went viral.

In mitigation, Jeffery, who was unrepresented, pleaded for leniency.

The site supervisor said he felt remorseful for violating the order, adding that he had to take care of his siblings, a child and his parents.

Magistrate Muhammad Faizal Che Saad asked the accused whether he understood the need to be quarantined after coming back to Sibu from Kuala Lumpur.

He also told the accused that his irresponsible act would not just affect himself but the society.

To this, Jeffery replied that he understood his offence.

In his submission, prosecuting officer Wilfred John Mujang said that a deterrent appropriate sentence must be imposed as the accused had violated the observation or surveillance of contacts order issued to him after he was identified as a Person Under Investigation (PUI) for Covid-19.

He said the accused had intentionally flouted the ‘home quarantine order’ and had betrayed the frontliners who have been working very hard to stop the spread of Covid-19.

“The prosecution would like to pray to this honourable court to pass the sentence that will commensurate with the offence committed.

“This will serve as a lesson for the accused, the on-going and other persons under investigation and to the general public at large to abide by the rules and regulations as stated in the Act 342 and the guidelines by the Ministry of Health Malaysia in order to break the chain of infections that will save the life of many Malaysians,” he pointed out.

Muhammad Faizal meted out the sentence after considering public interest especially in encouraging members of the public not to commit the same offence as the accused.

Speaking to the press after the case was heard, Billy described the fine as a lesson to those under quarantine and those who could be quarantined.

“We did not expect that the magistrate will impose such a high fine, but it is a very good fine as a lesson to those who still undergo quarantine.

According to him, this is the first case of quarantine violation brought to court and it showed how serious the Health Department is in dealing with Covid-19.

He said the accused was still under quarantine when he went out and posted pictures of himself on Facebook.

“He posted (on Facebook) ‘the band is a plastic, you can take it out and put it back on’. That message really makes me angry because he is teaching people to break the law. It is good that the magistrate gave him such a heavy penalty,” Billy said.

He said the department do not purposely find faults in others, but people who violate the order must be taught a lesson and should serve as a lesson for others

“Anyone breaks the quarantine order, we will charge them. For this case, we are not going to compound them because of its seriousness,” he said.

He said currently, there are a total of 777 assistant environmental health officers in the state.

He said the department is monitoring those under quarantine every day.