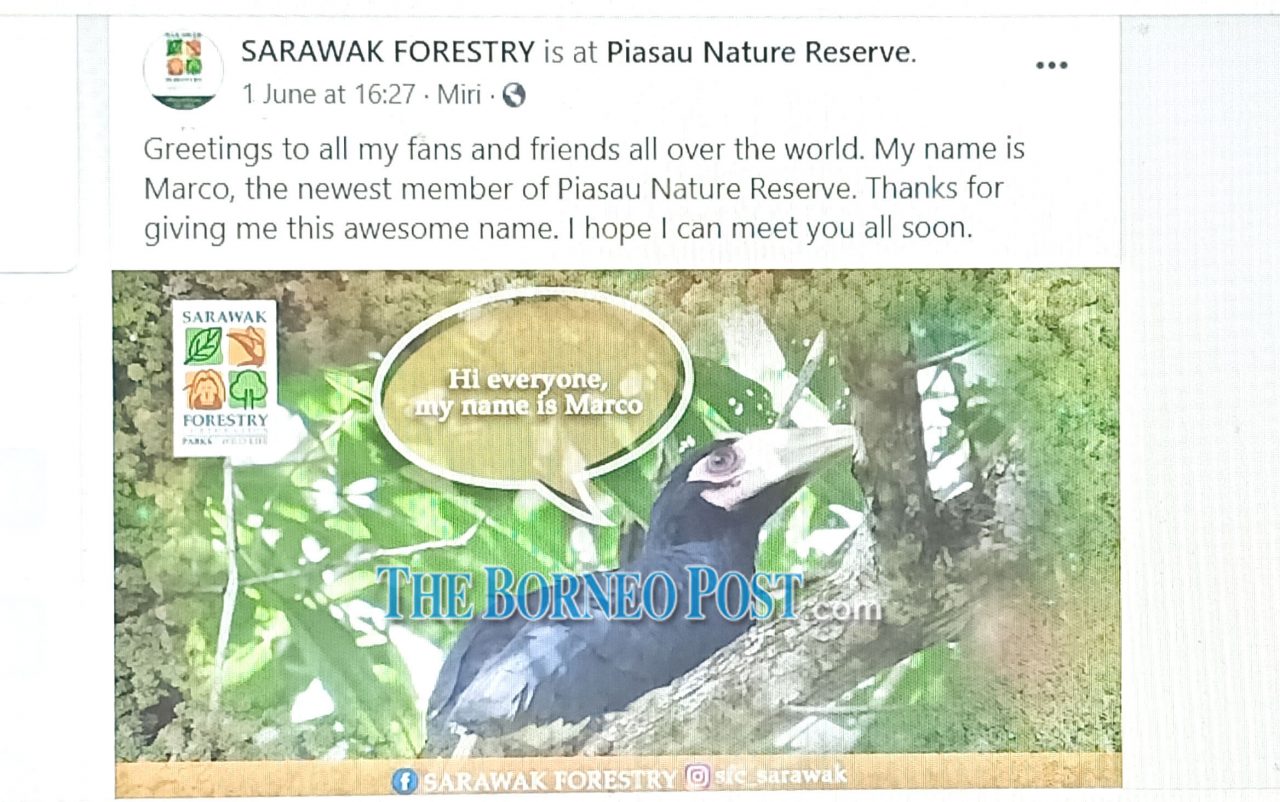 Marco being introduced to the world through SFC posting at its Facebook Page on June 1.

MIRI: Oriential pied hornbills at Piasau Nature Reserve (PNR) here have again attracted public attention in social media, particularly ‘Marco’ which has the winning name chosen by the public for the newest hornbill born in April.

Sarawak Forestry Corporation (SFC) announced the official name in its Facebook page on June 1. Since then it has received wide coverage in social media.

“Greetings to all my fans and friends all over the world. My name is Marco, the newest member of Piasau Nature Reserve. Thanks for giving me this awesome name. I hope I can meet you all soon,” said SFC in its FB page posting.

Its spokesperson said Marco’s name was chosen by the public via SFC’s Facebook poll created on May 30, which invited the public to help choose a name for the newest addition to the reserve’s hornbill population.

Without revealing the exact number of people choosing for Marco, the spokesperson said Marco received the highest votes among five names given.The others were Louis, Quarantino, Green and Covid.

Coincidentally, Marco was proposed by Borneo Post reporter, Cecilia Sman, who had written extensively about hornbills at Piasau Camp, which was gazetted a nature reserve on Dec 31, 2013.

Cecilia and her late husband, Brian G. Parker, through two associations, Malaysian Nature Society Miri Chapter and Piaisau Camp Nature Park Society, have also aggressively campaigned for Piasau Camp, a former residential area for Sarawak Shell staff to be converted in a nature reserve to conserve the rich biodiversity in the area.

In her posting thanking SFC and the public for choosing Marco, Cecilia said the name was proposed in memory of deadly Covid-19, and also her late husband who died in February, one month and eight days before the launch of Movement Control Order (MCO) to break the chain of Covid-19 infection.

Meanwhile, Marco is the seventh breeding success of the iconic pair of hornbill, Jimmy (papa hornbill) and his soulmate, Juliet. One of their pairs of offspring was also named after Cecilia and Musa (chairman of MNS Miri Chapter) who also actively studied hornbills at the nature reserve.

The pair was initially named Kumang and Keling but received widespread objections in social media especially from the Iban community because ‘Kumang’ and ‘Keling’ are people of ‘Panggau Libau’ (place of the gods) and they are ‘Petara’ (gods) of the Iban community.

Hornbills are totally protected species in Sarawak under the Wild Life Protection Ordinance 1998. Hornbill is a state birb which forms part of Sarawak’s crest.