Wednesday, August 17
You are at:Home»News»Sabah»Free solar energy for 300 villages in Tawau 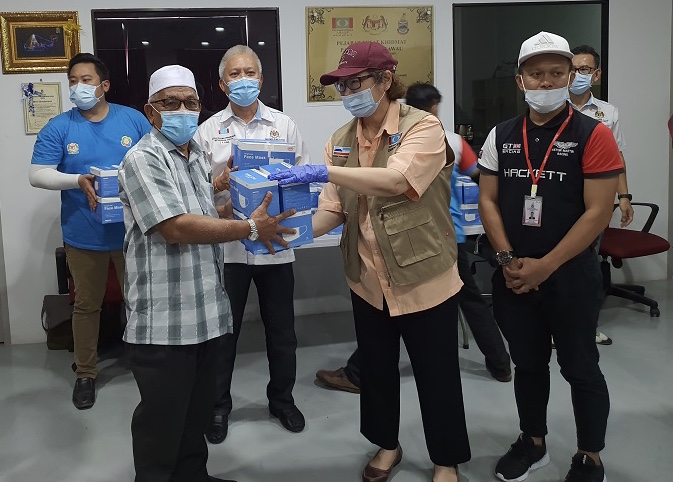 Christina (second right) handing over boxes of face masks to an NGO representative.

TAWAU: Some 300 villages in the Tawau Parliamentary Constituency that are without electricity supply stand to benefit from free solar energy when 300 units of the solar power system are installed, said Member of Parliament for Tawau, Datuk Christina Liew.

She said solar equipment such as solar panels and batteries from China will be donated through the Lions Club as a community service project.

“The Tawau Parliamentary People’s Service Centre is identifying the villages in Apas and Balung that need solar power, pending the shipment of solar equipment from China.

“Today, I am here again to hear out the people’s needs and problems.

” I hope a gathering of this nature can be held at least once a month in the near future,” Liew, who is also Deputy Chief Minister, said during a meet-the-people session after presenting 200 pieces of face mask to each of the 81 non-governmental organisations (NGOs)
registered with the People’s Service Centre here recently.

In the ensuing dialogue with recipients, a resident of Kg Kinabutan (area shared by Balung and Apas state constituencies) raised concern
over the persistent shortage of water supply faced by the people there since last year.

“Sometimes our taps are dry for one whole week. We have reported the matter to the elected representatives concerned last year and this year,” she lamented.

On the request for reopening of “taskas” (nurseries), Liew said the State Government would be making an announcement in due course, depending on advice from the State Health Department whether it would be safe to do so.

Affected residents from Kg Balung Cocos brought their woes to the Tawau MP’s attention, urging her to give priority to rectifying a seven-year problem of non-functional streetlights in the area.

“About seven of the electricity poles are not lit up at night. We have complained to MPT (Tawau Municipal Council) but the situation remains unresolved,” they pointed out.

Meanwhile, former MP for Tawau, Datuk Geoffrey Yee Lung Fook appealed to the State Government to consider some form of assistance for oil palm smallholders who incurred huge losses when their young crops were destroyed by intruding wild elephants, recently.

Speaking on behalf of the aggrieved smallholders, he told the minister that they have notified the Sabah Wildlife Department about the incidents but the threat from more than 20 ravaging elephants remained.

According to Mak Yee Vun, the elephants not only destroyed his oil palm plants but also trampled upon the workers’ quarters and damaged the kitchen.

Another smallholder Lim Ting Fui said it would cost him more than RM17,000 to replant oil palm on his 13-acre land at Ulu Kalumpang in Balung.

“The sum includes the cost of fertilisers. All the 15-month-old 750 seedlings which were planted less than a month ago, were devoured by the wild elephants a few days ago,” he moaned.

“I hope the government will ease my plight by providing new seedlings or some financial assistance.”

Speaking to reporters later, Liew said the Tawau Parliamentary People’s Service Centre has a service team who will coordinate with the Tawau Municipal Council in seeking solutions to problems
facing the rakyat.

“In the meantime, I will relay water and electricity issues to the relevant ministries and agencies.”

For complaints, the public are advised to contact any of the following officials:

On the local tourism sector, Liew, who is Minister of Tourism, Culture and Environment, said plans are afoot to stimulate the economy while encouraging registered homestay operators, who were impacted by the Movement Control Order (MCO), to apply for financial aid from the State Government through her Ministry.