Thursday, October 1
You are at:Home»News»People want party that won’t betray their mandate — Chong 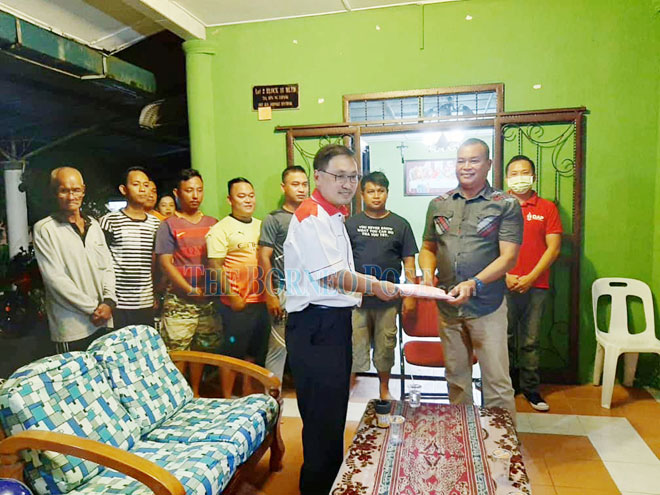 Chong receives the membership application forms from Insor Muin (second right) who represented the other villagers.

KUCHING: Though party-hopping, betrayals and back-stabbing have become the new norm in Malaysian politics, ordinary citizens are showing that they still value integrity and steadfast principles when choosing which party to support, says DAP Sarawak chairman Chong Chieng Jen.

He said he was most encouraged by the reason given by the more than 100 residents of a small village in Stampin constituency when submitting their application to become DAP members and to set up a new branch Saturday.

“I asked them why they chose to join DAP at this time when we are just ousted as the government.

“They said they prefer a party that is principled and will not betray the rakyat,” Chong said in a statement yesterday.

The Stampin MP said during his address to the new members, he emphasised that integrity, principles and discipline were the main pillars of DAP.

“That is what we expect of all our members. It is by steadfastly upholding these virtues that the rakyat will continue to have trust in DAP despite how dirty and murky the other parties and politicians have made politics in Malaysia,” he added.

Chong pointed out that in the past few months of political turmoil in the country, DAP stood out as a party that is disciplined and principled.

“Though politicians may have other views, but the ordinary rakyat do appreciate such virtues.

“Undoubtedly, in the whole ‘Sheraton Move’ saga and the ensuing few months of political turmoil, all 42 DAP MPs stood firmly with Pakatan Harapan (PH) and defended the mandate of the people.

“Not a single MP from DAP wavered or betrayed the trust of the people,” he stressed.

Amidst all the party-hopping and betrayals, Chong – also Kota Sentosa assemblyman – said there were many who tried to justify their betrayal and lack of integrity.

“A betrayal is a betrayal; no amount of nice words can beautify or justify the ugliness of a betrayal.

“We can never over-stress the virtue and importance of integrity and discipline in any political party and amongst politicians.

“If a political leader can betray the trust and votes of the rakyat, he can sell out anything for personal gain. Such leaders are not good for the country and the people.”

“One will not forget the recent history of GPS. When Barisan Nasional (BN) lost the federal power in 2018, GPS, whose component parties were then part of BN, quit the coalition and abandoned their partner of more than 40 years without any hesitation.

“Later when the remnants of BN together with PAS formed Perikatan Nasional (PN), which is what I call the resurrection of BN with the extremism of PAS, GPS quickly joined PN to be part of the federal government.”