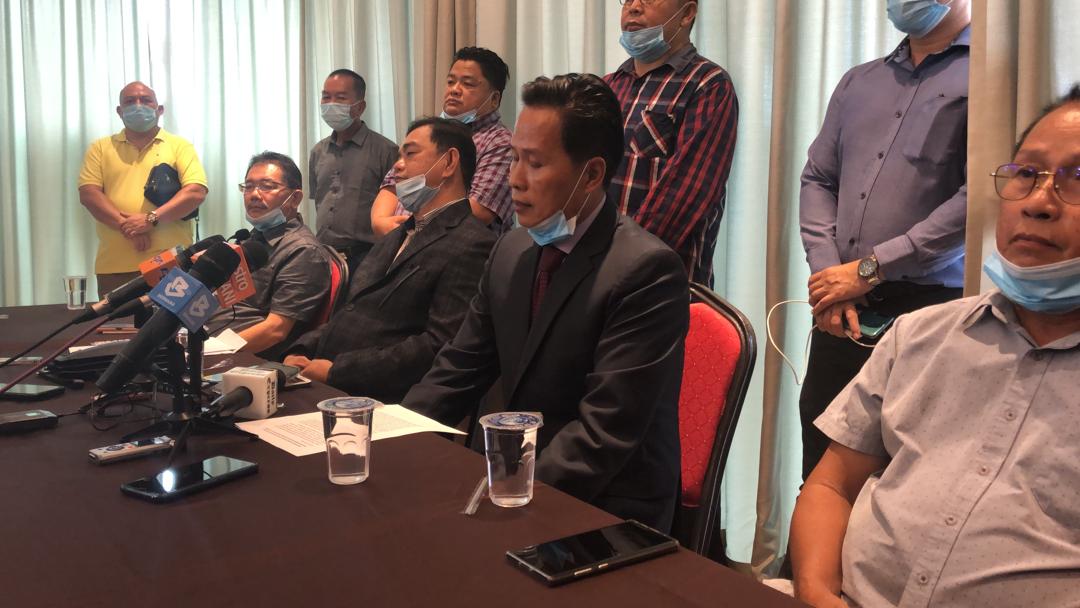 Their announcement came just a few days after rumours of them leaving the party was quashed by Upko president Datuk Seri Panglima Wilfred Madius Tangau.

Limus and James were both absent from a meeting of the government aligned elected representatives with Chief Minister Datuk Seri Shafie Apdal last Thursday sparking rumours of them quitting the party.

Speaking to reporters at Limus’ residence along Jalan Pintas here today, both said that their decision to leave Upko was made on their own free will.

“I decided to leave Upko because I have lost confidence in the party’s leadership which is not consistent with its direction and struggle. For now, I declare myself to be an independent state assemblyman who will continue to fight for the benefit of that people in Kuala Penyu,” said the two-term Kuala Penyu assemblyman said.

“When Upko president brought the party (out of BN) to support the Pakatan Harapan (PH) federal government, I went along with the decision. However with the latest change in the federal government and Upko’s decision to continue supporting Tun Dr Mahathir (Mohamad), my colleagues and I are of the opinion that it is now unreasonable to continue supporting the state government as it is now in the opposition,” he explained.

Limus expressed confidence that the PN government under Muhyiddin’s leadership can bring changes to the state and country’s political landscape.

James, who is Sugut’s three-term assemblyman said that he decided to leave Upko because of his belief that in order for development to happen, the state government must be part of the federal government.

James said that he has not made any decision as to which party he will be joining, adding: “I will go back to the constituency and while waiting for all the situation to go back to normal, I will talk to my supporters to see which party we will join but it will be the one that works together with the federal government.”

James stressed that he held on to the principle that in order for Sabah to develop, the state government must work together with the federal government.

“I left Umno because I wanted the state government to be with the federal government for the sake of development in Sugut, not because I have a personal interest. The people  in my constituency are still left far behind.

“If I stay with the state government which is not with the federal government, it will be very difficult to develop the constituency which is left far behind in terms of development,” he said.

James said in the last two years, there were minor developments in Sugut which were done using the assemblyman’s allocation.

“We did not get major developments. We have proposals but the allocations are from the federal government. So if we are not with it then it will be very difficult because the we all understand that the state’s funding is limited.

To a question whether their decision to leave Upko had anything to do with rumours of Umno enticing Sabah’s elected representatives, Limus said: “No, this is not true, we left at our own free will.

When asked on a news report of him saying that he had no intention to leave Upko published a day after the meeting with Shafie, Limus said at that time, he had not made any decision yet.

“Today we made the decision to leave Upko and the state government. We support the federal government led by Tan Sri Muhyiddin Yassin. We have not decided to join any party yet and will cross the bridge when we come to it.”

James added that he believed that more elected representatives would be following their footsteps in the next few days, adding that he and Limus had started the ball rolling.

He also did not rule out supporting former Chief Minister Tan Sri Musa Aman if he returns to lead the state administration again.

“If he gets the support from all YBs, why not? We have to follow because we do not want to be in the opposition,” he said.

Meanwhile, when asked if the presence of PBS vice president Datuk Johnny Mositun at the press conference meant that they were joining the party, Limus said: “He is a friend and the former Deputy State Assembly Speaker. He came so we we invited him to join the press conference, we are not joining PBS as we have yet to made any decision yet.

Limus was Upko vice president and the party Beaufort division chief while James was a Supreme Council member.

The Warisan lead government with PKR, DAP and Upko now has 45 state seats while the state opposition parties Sabah STAR, PBS and Umno have 19 seats.