Wednesday, September 23
You are at:Home»News»Sabah»Sabahan girl making waves in middle of blue sea 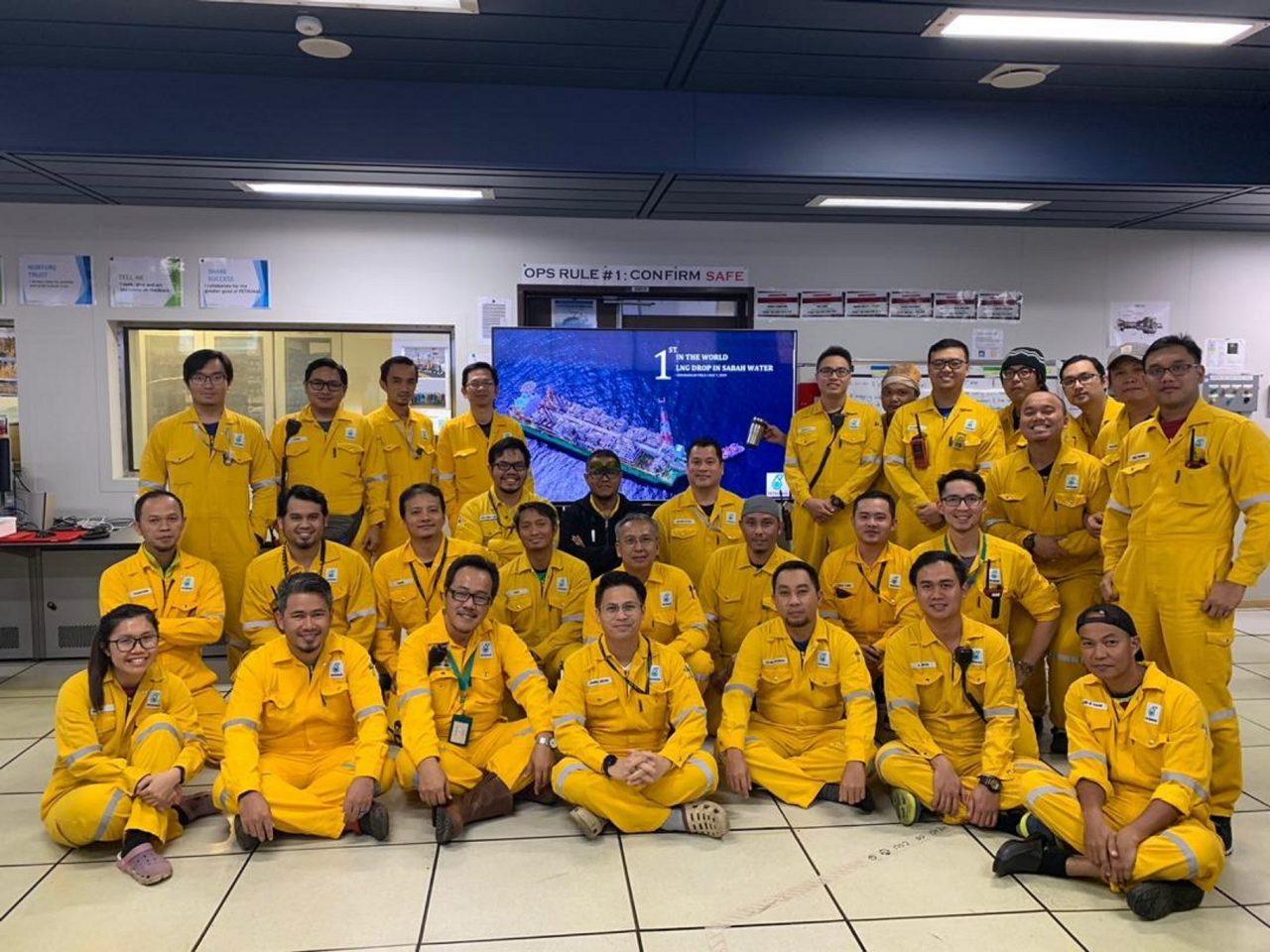 KOTA KINABALU: Going to the beach with her family was something Ellfira Fanira Rusileh would always look forward to during her time growing up in Kudat, north of Sabah.

She would write numbers on the sand, build random structures, or simply play by the seaside, at times pausing to wonder what lies beyond the horizon, never once imagining she would have a workplace out there some day.

The career journey that brought her to PFLNG Satu was defined by three things — a love for mathematics and chemistry, good grades in school, and later, an education sponsorship offered by Petronas to pursue Chemical Engineering at Universiti Teknologi Petronas (UTP).

Ellfira is among the first few female staff working onboard the PFLNG Satu, joining in November 2017 when it was still moored in Kanowit water off Sarawak, and continuing after its relocation to Kebabangan field in March 2019.

Designed to last up to 20 years without dry-docking, the PFLNG Satu extracts, liquefies and stores natural gas in far-flung offshore location. It has an annual production capacity of 1.2 million tonnes of LNG and complements Petronas’ global LNG portfolio.

The mega facility stands 10 stories high and 365 metres long—equivalent to three times the length of a football field—and capable of pumping gas from 200 metres below the ocean.

Not long after graduating from UTP, Ellfira was called to the Petronas Twin Towers for a job interview.

“At the start of it, I was nervous but excited at the same time. I was asked to describe myself in three words, to which I answered: friendly, honest, and committed. They want to know me as a person and the values that I believe in. Then things went on smoothly; in the end, it was a fun interview,” said Ellfira, the fourth of five siblings and the only daughter.

Her father, a civil servant, is a Dusun from Kota Marudu, while her mother, a housewife, is a Rungus from Kudat. 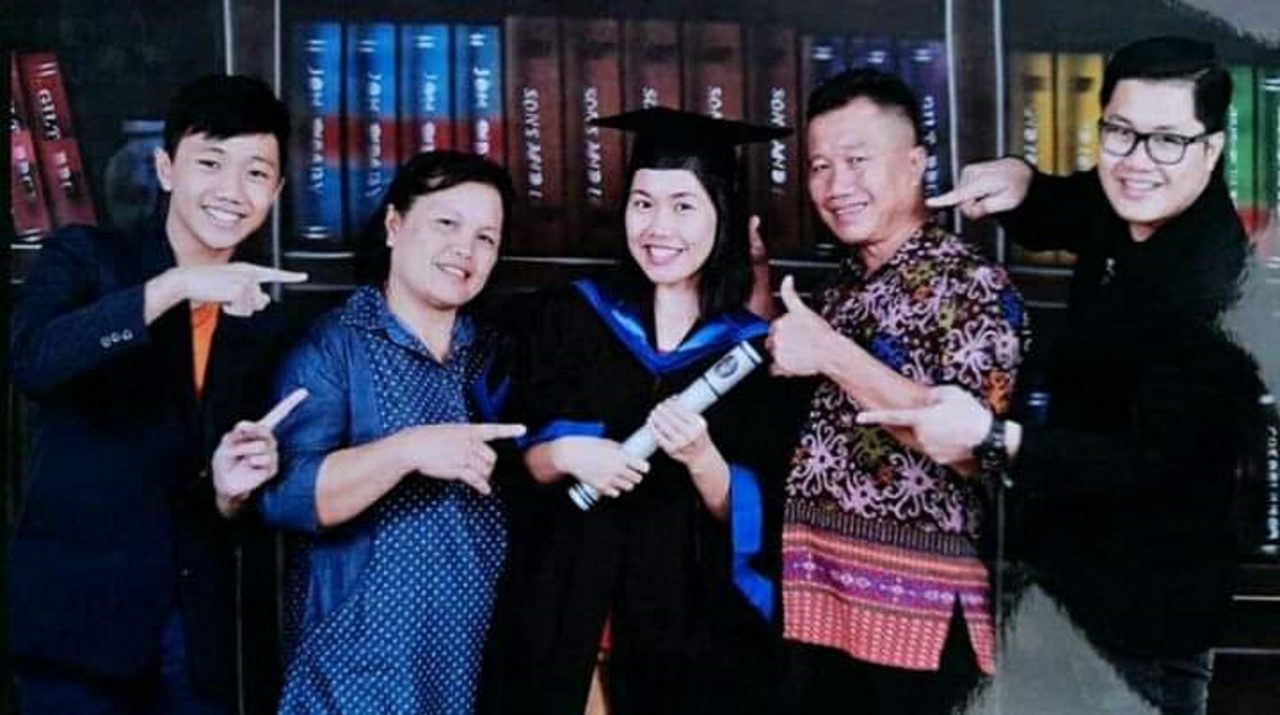 Ellfira with her parents and two of her brothers.

The job offer for PFLNG Satu came three months later. But prior to starting work there, she was sent for an attachment at Malaysia LNG in Bintulu for six months — a time she described as an eye-opening experience as she got to learn the whole LNG value chain firsthand.

“It was like attending a university for the second time — a university for LNG. I was able to join the operations at site, be part of plant shutdowns and turnarounds. So, when I started work in PFLNG Satu, I was already familiar with the processes,” she said.

The PFLNG Satu is served by about 150 staff who are working on shift – three weeks of 12-hour shifts offshore, followed by three weeks of off days, onshore. Apart from Ellfira, there are several other female staff working regularly onboard PFLNG Satu.

Her knack for adventure helps her cope well with an extraordinary working environment.

“When I was in school, I did a lot of outdoor activities, like joining the army cadet; I did marches, including armed marches. I played futsal too. You can say I am adventurous; I like taking challenges,” Ellfira said.

Going to work entails her to fly on a helicopter to the “floater”— as what PFLNG Satu is known among the staff—which takes about 20 minutes; other times she would take a crew boat, a journey that takes about two and a half hours.

As an operations engineer, Ellfira’s role is to look after the production as well as keeping the plant running safely and efficiently.

Initially, some adjustments were required, she added. “But my colleagues help me adjust to the working environment. They treat me as one of them, like a family member, and teamwork is very strong. They guide and upskill me so I can do better. That helps me a lot in my work. Petronas is good at developing its people,” she added.

Other than work, recreational facilities are available on the floater. “There is what we call a work-life balance on the floater. We have a gymnasium there as well as a futsal court,” she added.

“It’s an interesting thing working in an unfamiliar environment; it’s like going on a new adventure. My parents were initially apprehensive about me working in the middle of the sea, but I told them not to worry, that Petronas is a good company to work for and safety is its utmost priority,” said Ellfira.

Looking back, she said even if she were to have an opportunity to begin over again, she would still choose the career she has now.

When she is off duty, Ellfira often reminisces about her childhood, glancing into the horizon, towards Kudat, the place she grew up in. There lies her childhood beach, the place where she used to scribble things on the sand.

It has been a long time coming but she now knows the answer to what her childhood self often wondered about — what lies beyond the horizon. A lot of things, really, including herself and the big, majestic PFLNG Satu.