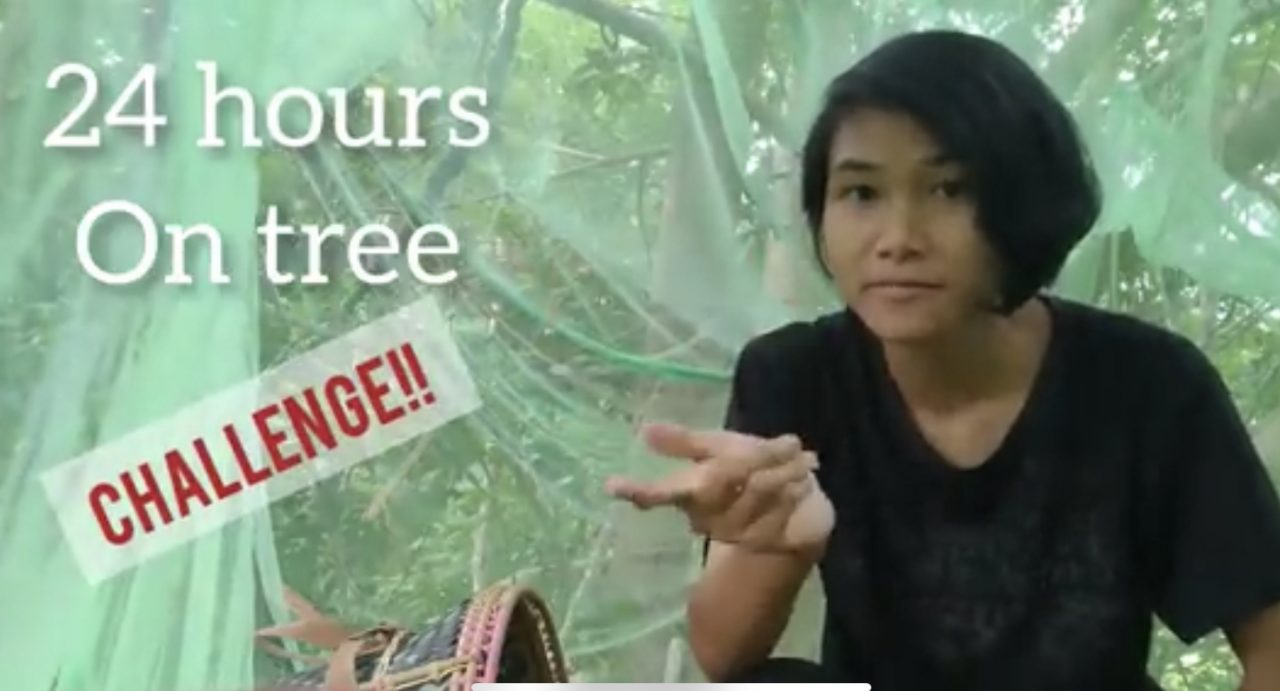 KOTA KINABALU: A video entitled “24 Hours On Tree Challenge” by Veveonah Mosibin, a Universiti Malaysia Sabah student, recently went viral as thousands of Malaysians are touched by her determination not to allow any obstacles stop her in her educational pursuit.

With limited internet connection in her village, Kampung Sapatalang Pitas, she was forced to build a hut on a hill in the jungle in order to ‘attend’ a virtual test conducted by the university during the pandemic.

However, the hut she built was destroyed due to strong rain and wind.

It was the reason for her to set up a few stilts on a langsat tree, so that she can sit comfortably while answering the test questions.

“I thank everyone for supporting my video and subscribing to my YouTube channel, especially UMS for sharing the video.

“I will do more interesting videos after this,” she said in her latest post.

Due to the Movement Control Order (MCO), universities in Malaysia were closed and their classes have been conducted online.

Many students have been sharing their difficulties in attending online classes and tests, but Veveonah made her journey interesting by making videos and sharing it on social media.

The Borneo Post contacted one of her former teachers from SK Pekan Pitas, Ruby Ronarita who saw the potential of the Kimaragang girl since she was in primary school.

“I think all teachers in the school would remember Veveonah, a girl who has a very strong identity, high respect to the teachers and friends.

“She always came to my room asking for advice, especially in Maths. She once came to my room, asking how to be an excellent student. I shared some tips and told her to watch Tutor TV. She replied that they don’t have TV at home and she had not watched TV for sometime,” said Ruby, who is the counselling teacher in the school.

Looking at her mature character since primary school, “it is really not too much saying she is a future leader,” said Ruby.

Veveonah obtained 5As in UPSR and furthered her studies in SMK Pitas, after that MRSM Sandakan, where she managed to get 8As in SPM.

Thousands shared the video on Facebook as it touched many hearts among Sabahans too.

Many successful Sabahans who face the same hardship as Veveonah shared their stories, saying that there are so many things that needed to be changed in the state, especially infrastructure.

Many positive comments on the YouTube channel also received reactions such as “love” and “thumbs up”.

“I admire her determination, but no one deserves to go through this hardship to get an education while many leaders sit comfortably in their home,” said Farra Aina in a comment.

“I showed this video to my students who lived in town because they always complain about their slow internet connection. Today most of them handed in their work. Thanks for the inspiring video,” said Aubrey Griffin.

Veveonah’s YouTube channel has almost 30,000 subscribers as of 8 pm yesterday.