Sunday, September 19
You are at:Home»News»Sabah»No greenlight yet for lottery outlets to resume operations 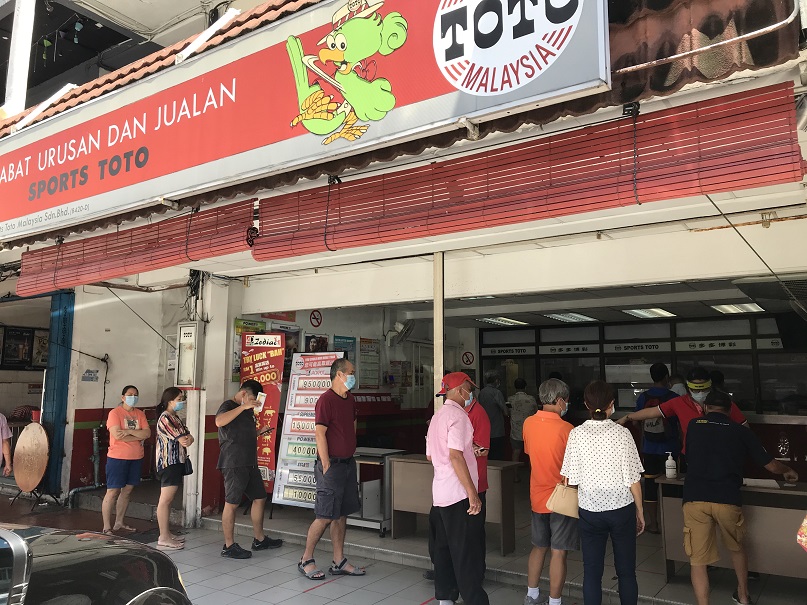 Punters queuing up outside the Sports Toto outlet at Bornion Centre yesterday morning before the operator was ordered to close it by local authorities.

KOTA KINABALU: A lottery operator’s outlets were yesterday ordered closed by the local authorities as the State Government has yet to give its green light for number forecast operators (NFOs) to reopen.

Customers queued up outside Sports Toto outlet in Bornion Centre yesterday morning, patiently waiting for their turn to enter the premises as it reopened for the first time in three months since the Movement Control Order (MCO) was enforced on March 18.

An employee was tasked with checking the temperature of customers, making sure they registered their contact details as well as allowing only 20 customers into the premises at any one time.

Peter Chung, who was seen queuing up outside the Sports Toto outlet, said he intended to buy a few lottery tickets on the auspicious day of the resumption of business for NFOs.

“The lottery outlets have all been closed for three months.

“I was buying things nearby and thought I ought to buy a few lottery tickets, for good luck’s sake.”

However, the local authorities soon ordered lottery operators to close as the State Government has yet to allow the reopening of NFOs in Sabah.

Sports Toto, Magnum and Da Ma Cai resumed business in Peninsular Malaysia yesterday, following the reopening of the lottery business during the implementation of the Recovery Movement Control Order (RMCO) last Wednesday to allow nearly all business sectors to operate with the required standard operating procedures (SOPs) in place. The RMCO is scheduled to last until August 31.

A local lottery operator said he was informed by the local authorities that NFOs were not allowed to open for business yet pending further instructions from the State Government.

Another lottery company said employees returned to the outlets yesterday morning to clean up the premises after the Federal Government announced that NFOs could resume operation under strict SOPs on Tuesday.

“But before we opened our outlets, we were informed that the State Government has not given the green light yet so we are to remain closed until further instruction.

“There will be no draw today as no tickets have been sold,” he added.

All 4D outlets in the city centre were also closed yesterday.

A coffee shop operator at Jalan Pantai said she managed to buy a lottery ticket from the Sports Toto outlet next door, before the Kota Kinabalu City Hall (DBKK) enforcement personnel and police ordered the premises to shut down around 12.30pm due to the customers who gathered outside.

“I wouldn’t know where to collect my winnings if my ticket number was drawn,” she joked.