Wednesday, July 8
You are at:Home»Lite Stories»In Spain, the white lion cub whose mum didn’t want him 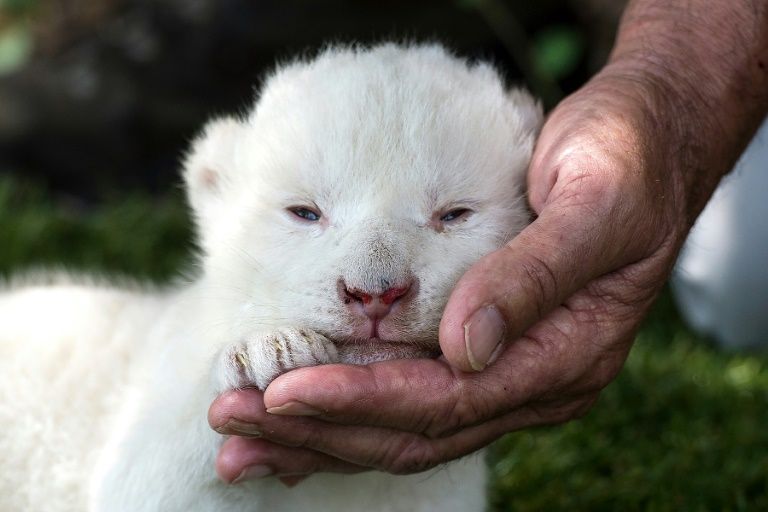 Born on May 31, the cub is the first white lion born in a Spanish zoo. AFP Photo

GUILLENA: His name is White King, he’s 10 days old and the zoo says he’s a real “teddy bear”. But the lioness who bore him rejected him after a traumatic birth.

Born on May 31, the cub is the first white lion born in a Spanish zoo.

Curled up in the arms of Juan Luis Malpartida, director of the Mundo Park zoo near the southern city of Seville, he’s getting no shortage of cuddles and even a bottle of milk.

“It was a bad birth,” he told AFP, adding that the mother, a white lioness brought over from Thailand four years ago had “laboured for 14 or 15 days before giving birth”.

And when he finally emerged, he was a hefty little fellow.

“Just imagine what she went through, I don’t know how she got him out,” says Malpartida, a 73-year-old who has spent his life surrounded by animals.

In the first three days, he didn’t feed and after realising his mother “wasn’t paying him any attention”, they pulled him out of the compound, dehydrated and suffering from “hypothermia and hypoglycemia”.

By Wednesday, the change was evident.

“It’s the first day I’ve seen with his head held up, trying to run,” he said.

For now the mother appears happy enough after her ordeal.

“She’s totally calm,” he said, indicating she appeared to have put the trauma of the birth behind her.

“She wanted to be free of the cub, she was ready to mate again.”

White King will be one of the biggest attractions when this zoo, which counts 3,000 animals, reopens on Thursday following a three-month closure due to the epidemic.

For now, the Mundo Park staff will keep looking after him.

“When we see he’s ready to be reunited with his parents, we’ll do it. But it’s a delicate issue because then he will competing with his father” for the mother’s attention. – AFP