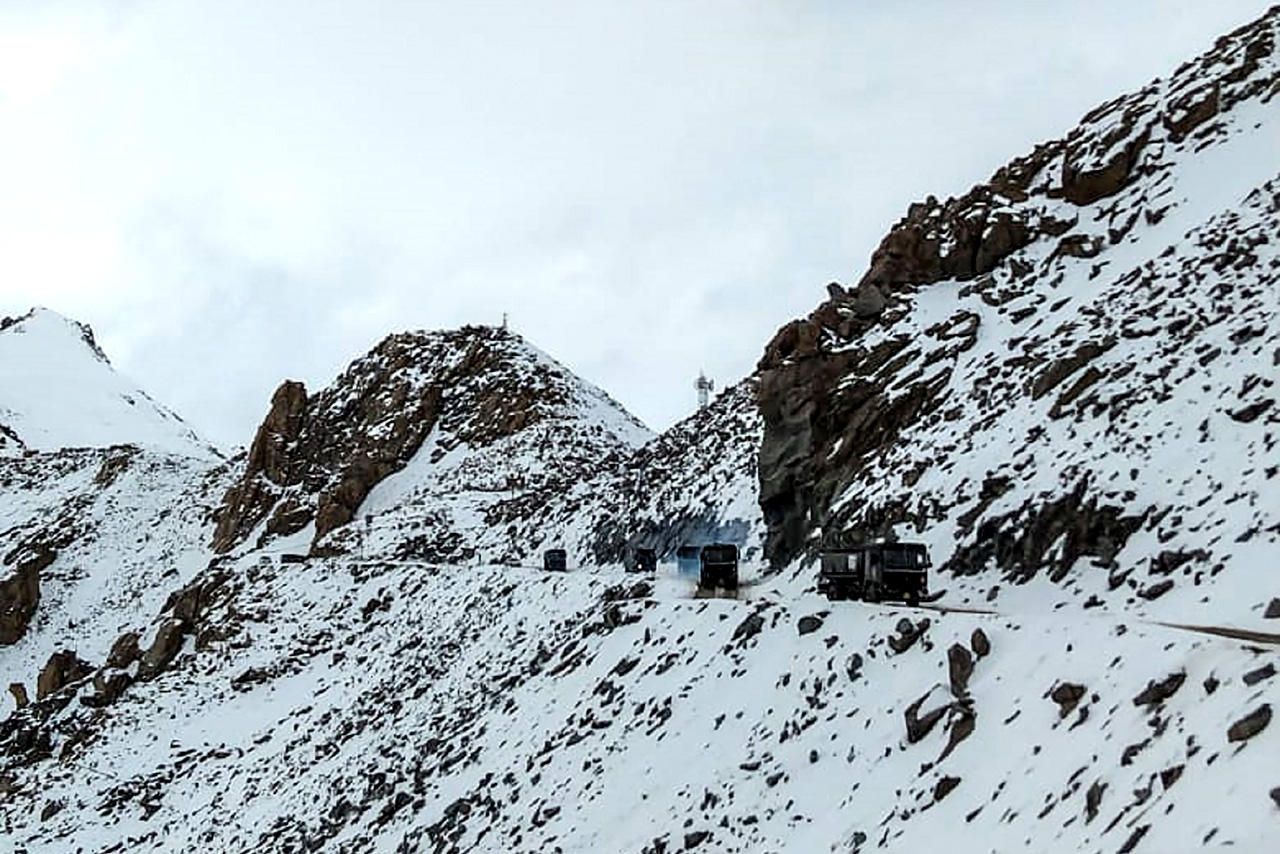 Indian Army vehicles drive on a road near Chang La high mountain pass in northern India’s Ladakh region of Jammu and Kashmir state near the border with China. — AFP photo

NEW DELHI: India and China agreed Wednesday to ease tensions at their disputed Himalayan border, even as they traded blame for a brawl that left at least 20 Indian soldiers dead.

The two nations’ foreign ministers spoke by telephone to calm nerves after a high-altitude melee involving fists, rocks and clubs.

The call between China’s Wang Yi and India’s Subrahmanyam Jaishankar came as sources told AFP that Indian paramilitaries were being deployed to the area of the skirmish high in the Himalayas opposite Tibet.

China has refused to confirm if it suffered any casualties in the first deadly clashes at the border in decades, although Indian media said at least 40 Chinese troops were killed or seriously hurt.

The Chinese foreign ministry said in a statement that Wang demanded ‘India conduct a thorough investigation’ and punish those responsible.

“The Indian side must not misjudge the current situation, and must not underestimate China’s firm will to safeguard its territorial sovereignty,” it added.

He warned that ‘this unprecedented development will have a serious impact on the bilateral relationship’ and urged Beijing to ‘take corrective steps’.

But the two ministers also sought to de-escalate tensions.

China said both sides agreed to ‘cool down the situation on the ground as soon as possible’.

India’s foreign ministry said the two sides would implement a previously agreed disengagement, and ‘neither side would take any action to escalate matters’.

However, ministry spokesman Anurag Srivastava said late Wednesday that ‘making exaggerated and untenable claims is contrary’ to a responsible de-escalation, in comments carried by the Press Trust of India.

The incident, which took place Monday at around 4,500 metres up in the Galwan valley area, dominated Indian news channels and inflamed social media in both countries.

In India, small groups of protesters called for the boycott of Chinese goods, with some burning posters of Chinese President Xi Jinping.

Prime Minister Narendra Modi told the nation the deaths of the soldiers ‘will not be in vain’.

Sources told AFP that military transport aircraft had made a number of rare night-time landings in Leh, capital of India’s Ladakh region opposite China’s Tibet, throughout Tuesday night.

The clashes reportedly involved intense hand-to-hand fighting but no gunfire, in line with longstanding practices aimed at avoiding a full military confrontation over the disputed 3,500-kilometre border.

An Indian army source told AFP there were ‘violent hand-to-hand scuffles’, while media said that Chinese troops attacked with rods and nail-studded clubs.

Many of these killed appear to have been punched or shoved off a ridge onto rocks and into an icy river below.

“They came hurtling down like free-falling objects,” one source told AFP.

Postmortem examinations on some of those killed showed that the “primary reason for death is drowning and it looks like they fell from a height into the water because of head injuries,” an official told AFP.

Sources said Wednesday that six Indian soldiers were still missing. Both sides have given competing versions of the violence.

New Delhi said the Chinese side sought to ‘erect a structure’ on the Indian side of the valley and ‘took pre-meditated and planned action that was directly responsible’ for the violence.

The US has said it was hoping for a ‘peaceful resolution’ and the United Nations called for ‘maximum restraint’.

Previous ArticlePeter Anthony claims trial to abetting CBT involving over RM15.5 million
Next Article US cop charged with murder for shooting man in the back