Tuesday, March 2
You are at:Home»News»Business premise in Bandar Riyal ordered to close for not complying with SOP under RMCO 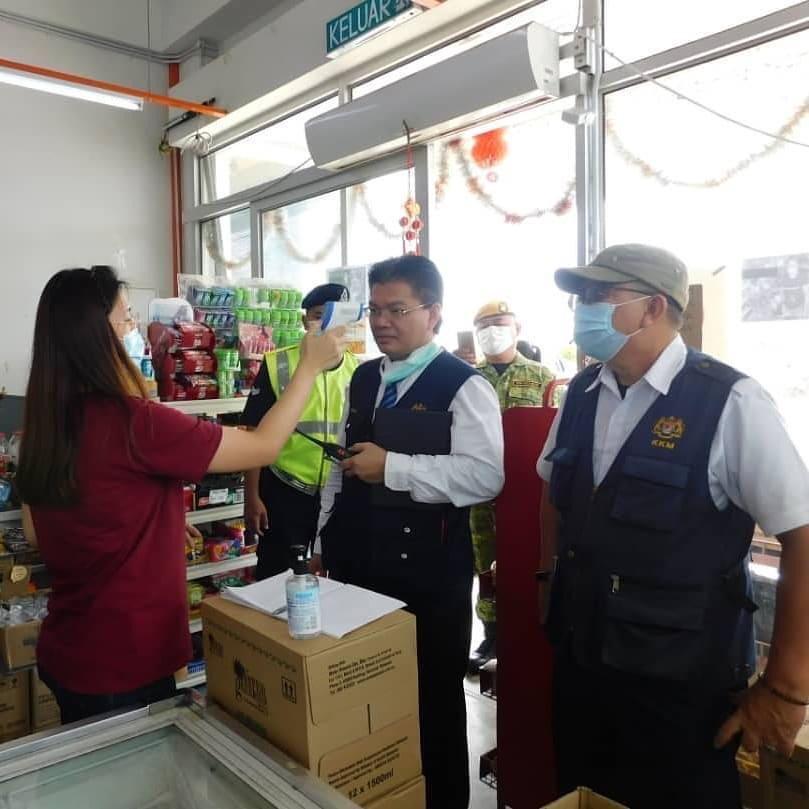 Billy (centre) getting his body temperature checked before proceeding to check on this convenience store.

KUCHING: A business premise at Bandar Riyal, Kota Samarahan was ordered to close on Friday (June 19) during a Recovery Movement Control Order (RMCO) compliance integrated operation carried out by Ministry of Health (MOH) and other agencies.

The same operation also issued notices under Section 32B of the Food Act 32B to two individuals for smoking in an eatery, while two foreigners without valid working permits were also apprehended and handed over to the police for further action.

He explained the errant business premise was served with a seven-day closure order for not complying with the standard operating procedure (SOP) for businesses under the RMCO including failing to produce the name list of people entering the shop.

Under the SOP, names and telephone numbers of customers must be recorded for the purpose of contact tracing in the event of Covid-19 infection at the premise.

“The business premise was also found not doing any cleaning, disinfecting nor sanitation as warranted in the SOP. Though the closure order is for seven days, it can reopen sooner if we are satisfied that the proprietor had rectified the mistake in accordance with the SOP since we will visit the outlet again on the third day,” he said.

Regarding the two notices issued to the individuals caught smoking, Billy explained this action was taken because the smoking ban in eateries in still in force following its full implementation effective Jan 1 this year.

He said the two notices were issued for offences under Regulation 11(1)(d) of Control of Tobacco Products (Amendment) Regulations 2018, whereby they have to pay compound of RM250 or face legal action in court for failure of payment.

He also disclosed the two foreigners without valid permit were found working at a convenience store, and both of them had been handed over to the Kota Samarahan police.

“We thank them for cooperation rendered during the operation. We also thank the proprietors who have complied with the SOP of the RMCO and we hope this level of compliance will continue as we all work together to protect ourselves and our state from Covid-19,” he added.

He also said similar operations to check on SOP compliance will be carried out during the duration of RMCO to ensure everyone play their part in breaking the chain of Covid-19 transmission.