Tuesday, October 19
You are at:Home»News»Robert Lau pledges to speak up on Sarawak’s rights, interest under MA63, IGC report in Dewan Negara 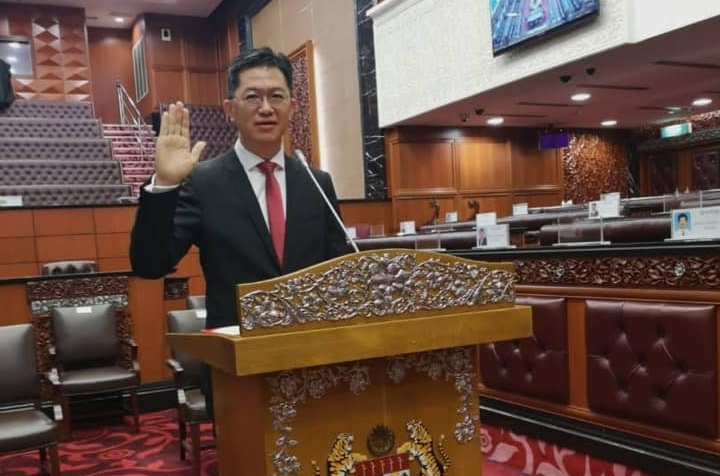 He said that this is among the three areas that that he will pay heed to during his term.

“The first (and foremost) will be Sarawak’s rights and interest under MA63 and IGC Report. Sarawak and Sabah are to be treated as equal partners in the Federation of Malaysia.

Secondly, Lau said as a member of the legislature, he will do his part to ensure the principle of the separation of powers among the three pillars of democratic system of the government namely the legislature, executive and judiciary be abide by.

“Third concerns my hometown, Sibu and the Rajang Basin. It has seen its glory days in the natural resources and commodity boom over the last half a century.

“We now urgently need to renew and grow the economy so as to provide jobs and hope to those in this area. This will call for investments in the public facilities and infrastructures and the private sectors to reinvest in their community,” Lau said.

Noting that Sibu is located at the heart of Sarawak, he said it is the gateway to the vast hinterland where many of the Iban and other communities live.

“These communities need equal access as those in the cities here in Malaya otherwise they will always be left behind,” Lau stressed.

Towards this end, Lau said together with his two Sarawakian colleagues Senator Susan Chemerai Anding and and Senator Rita Sarinah Patrick Insol are advantaged by virtue of their legal background.

Describing his feelings, Lau said he is honoured to be nominated by his party, Sarawak United People’s Party and GPS to be a member of the Dewan Negara to be effective from date of swearing in on 22 June.

“I thank the leadership of both SUPP and GPS for having the trust in me to carry out the role as a senator.

“It is a responsibility and duty that I will carry out to the best of my ability.

“That, I am thankful to my parents for affording me the opportunity to study and pursue a career in law and the education afforded me in Sibu in the 1970s and early 80s especially by my principal and teachers from my alma mater in Sibu, SMK Sacred Heart. The school provided and continue to provide excellent education, one that rivaled the best in any commonwealth countries of that era.”

Adding on, he said that opportunity in education has led him to stand in the August house to carry out another duty and this time is to serve his community in Sibu, to defend Sarawak and to contribute to the country with the aim of making the country a better nation.

“Finally, my hope for the country is as that shared by many of those past leaders such as Tunku Abdul Rahman that we can live in a stable, democratic, progressive and a moderate society and that the policies of the government are fair and just to all citizens,” Lau said.

Prior to the trio’s appointment, the state’s ruling coalition Gabungan Parti Sarawak has two Senators, who are both from PBB.

Lau, 55, is SUPP Bawang Assan chairman and a lawyer by profession.

The old boy of Sacred Heart Secondary School had served in Sibu Municipal Council (SMC) from 2004 until 2013 as the Works and Traffic standing committee chairman.

Prior to the general election in 2018, he was also named as a Senator to represent Sibu but that did not materialise.

Lau was fielded as the Barisan Nasional candidate in the 2010 Sibu by-election following the demise of Datuk Robert Lau Hoi Chew, who is his cousin, but lost to the then Democratic Action Party (DAP) state chairman, the late Wong Ho Leng.

Rita, 58, meanwhile, is from Rumah William Bansa in Dijih, Selangau.

She went to Kolej Tuanku Haji Bujang Miri for her upper secondary education before taking up law in University of Malaya and later obtained her MBA from Herriot Watt University.

Rita is a well known public figure in Bintulu, being the chairman of Serakup Indu Dayak Sarawak (SIDS) Bintulu for 17 years.

She stood on the PRS ticket in Selangau in the last parliamentary, losing to Baru Bian.

Meanwhile, the 57-year-old Susan is an Iban lawyer from Sri Aman.

She was appointed a political secretary to the Chief Minister in May 2017.

She is currently the Honorary Secretary of the PBB Women’s Wing and a member of the Board of Trustee of the Iban Women Charitable Trust.