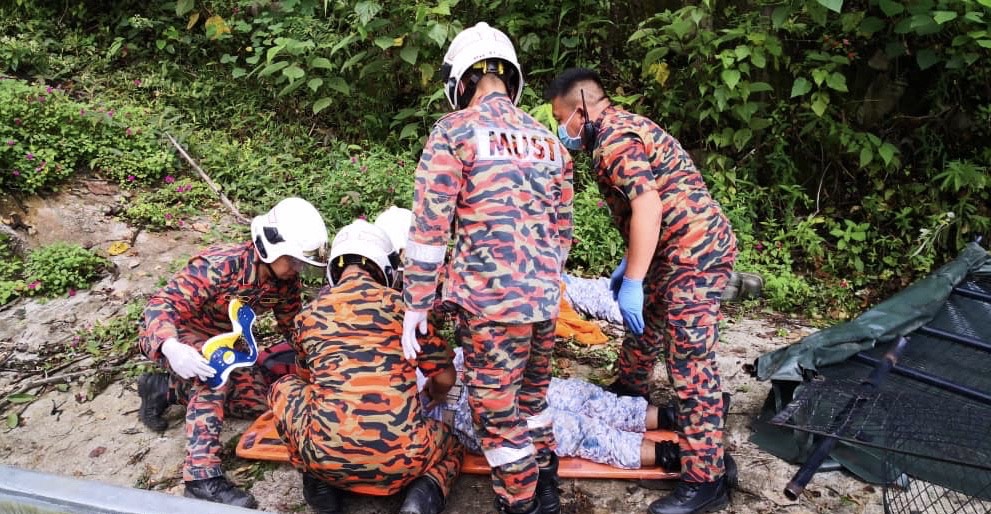 Fire and Rescue personnel attending to the only surviving victim.

KOTA BELUD: Three Royal Malaysian Navy (RMN) personnel were killed while another personnel was injured when the truck they were travelling in skidded and crashed at Ranau-Kota Kinabalu road, near Kampung Bundu Tuhan, yesterday.

Kote Belud Police Chief, Superintendent Mohd Zaidi Abdullah said the four personnel were on their way to the Sepanggar Naval Base from the Sandakan Naval base when the 1pm incident occurred.

“Police investigation found they were transporting military items from the Sandakan Naval Base to the Sepanggar Naval Base when the driver allegedly lost control of the truck at a bend while going downhill.

“The truck skidded and rammed into a road railing and a hillside,” he said yesterday.

According to Mohd Zaidi, passes-rby came to help the victims before fire and rescue personnel, paramedics and police arrived.

“Unfortunately, three of the personnel were pronounced dead at the scene while the only survivor was taken to the Ranau Hospital for treatment,” he said, adding that investigation was being carried out.

Police will investigate the case under Section 41(1) of the Road Transport Act 1987.

Meanwhile, Ranau fire and rescue station chief Ridwan Mohd Taib said a distress call was received at 1.05pm and seven fire and rescue personnel were immediately dispatched to the location.

Ridwan said all victims were taken out of the truck by members of the public before fire and rescue personnel arrived at the scene.

“The three victims who were killed were taken to the Queen Elizabeth Hospital in Kota Kinabalu in a police truck, while the survivor was taken to the Ranau Hospital for treatment,” he said

Ridwan added that no other vehicles were involved in the incident and the whole operation ended at 3.20pm.
The Royal Malaysian Navy, in a statement, confirmed the incident.

He said a through investigation would be carried out to determine the actual cause of the incident.