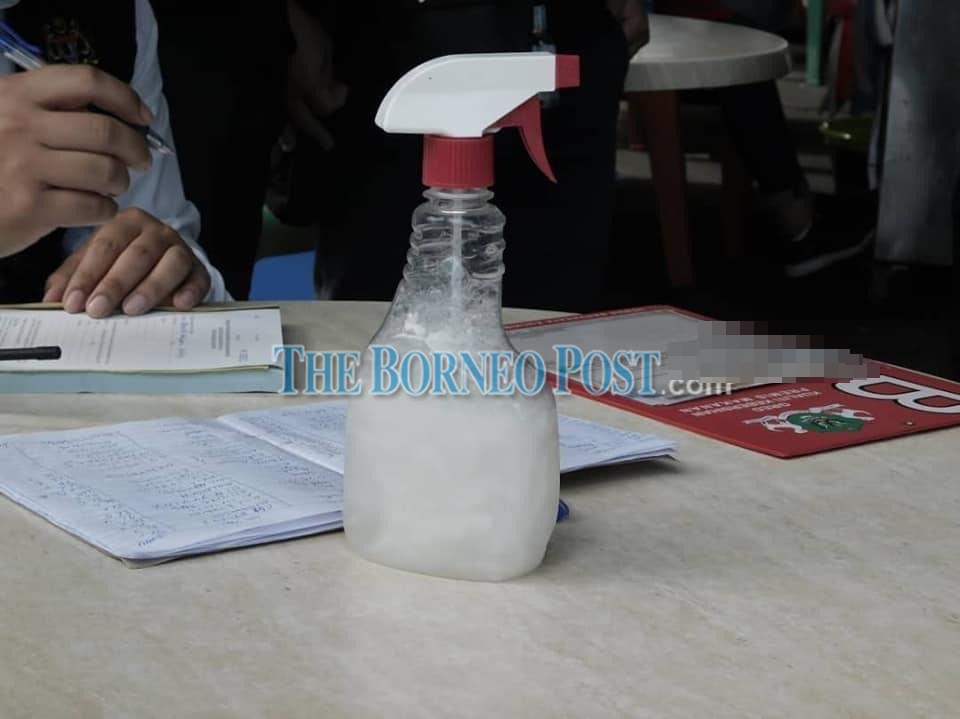 A close up photo of a spray bottle containing the detergent solution used to ‘sanitise’ hands at an eatery.

KUCHING: Some business premises in the city were found to be using detergent disguised as sanitiser for customers to clean their hands before entering the premises.

This was discovered following a joint operation carried out by Ministry of Health (MOH) at Gita, Metro City, Matang Baru and Demak yesterday (June 24) to check on Recovery Movement Control Order (RMCO) compliance by business sectors allowed to reopen.

Sarawak chief environmental health officer Billy Sujang said the usage of detergent not only violates the standard operating procedures (SOP) under the RMCO, but it can also do harm on the consumers.

“Detergents are corrosive and poisonous, which is why its usage as sanitiser is harmful. If the business premises want to use other hand wash solutions, make sure there is a sink and tap nearby for the customer to wash their hands properly,” he said today.

On yesterday’s operation, Billy said compounds were issued to six errant business premises for not complying with the SOP under the RMCO.

He explained the violations committed included not providing sanitisers, not recording body temperature and particulars of people entering the premises, and not cleaning, disinfecting nor sanitatising the premises which are offences under the Prevention and Control of Infectious Diseases (Measures Within Infected Local Areas) (No.7) Regulations 2020.

“Each compound is fixed at RM1,000 fine. Therefore, the total value of compounds issued that day were RM6,000,” he said. 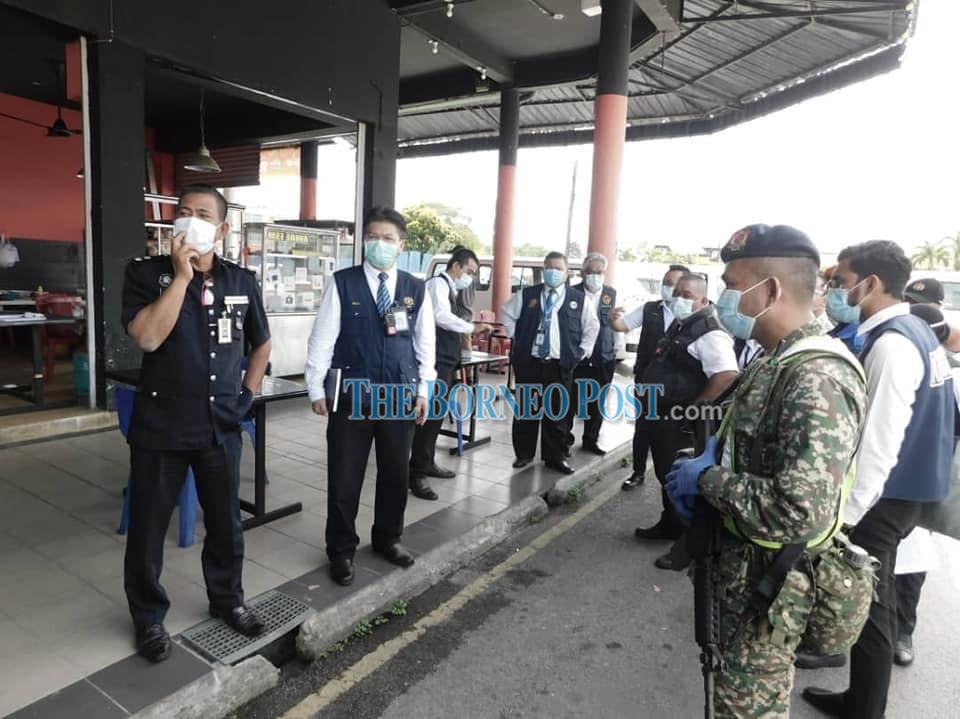 Personnel from police and armed forces assist the MOH enforcement during the operation. At second left is Billy.

A total 63 premises were checked during the operating comprising 30 eateries, 29 retail outlets and convenience stores and four barbers and hair salons.

It involved a total 44 enforcement personnel comprising 24 from MOH, seven from the Kuching police district headquarters, 10 from Kuching City North Commission and one each from armed forces, Civil Defence Force and Rela.

On a related matter, Billy said 17 notices under Section 32B of Food Act 1983 were issued to those who violated the smoking ban in eateries during the operation.

He explained 15 of the notices were issued to individuals found smoking at the eatery, which is an offence under Regulation 11(1)(d) of Control of Tobacco Products (Amendment) Regulations 2018.

The other two notices were issued to eatery proprietors who provided ashtrays and other items to encourage people to smoke in their eateries which is an offence under Regulation 12(1)(b) of the same Regulations.

Offences under Regulation 11(1)(d) can be compounded up to RM250 or face charges in court. If found guilty, the offender can be fined not more than RM10,000 or a jail sentence not more than two years.

Offences under Regulation 12(1)(b), on the other hand, can be compounded to RM250. If charged in the court, the offender can be fined not more than RM3,000 or jailed not more than six months, if found guilty.

“For the information of everyone, the smoking ban in eateries is still in force.

“We will continue to carry out this joint operations in more places throughout Sarawak during RMCO not just to make sure business sectors comply with the SOP, but also to ensure the public comply with the smoking ban in eateries,” said Billy.