Wednesday, July 8
You are at:Home»News»Sarawak now allows extending tables in eateries but with social distancing

A combination of photos to show the seating arrangement for dine-in customers who come in group of eight persons according to the SOP.

KUCHING: Restaurants and coffee shops (kopitiam) in the state can now allow customers to join two tables if they come in and dine in a group of five to eight persons.

According to the updated Standard Operating Procedures (SOPs) just released by the state Ministry of Local Government and Housing (MLGH) for eateries and restaurants, the table arrangement can be adjusted to suit the needs of the customers as long as the one metre social distancing is observed.

It also stated that tables must be arranged two metres apart to ensure there is one metre social distancing among groups of diners.

Based on the SOP, one table can sit up to three or four people, and if two tables are combined, then the maximum number of diners sitting together while maintaining social distancing is eight persons.

The SOP also mentioned that tables must also be arranged two metres apart at food courts and hawker centres. 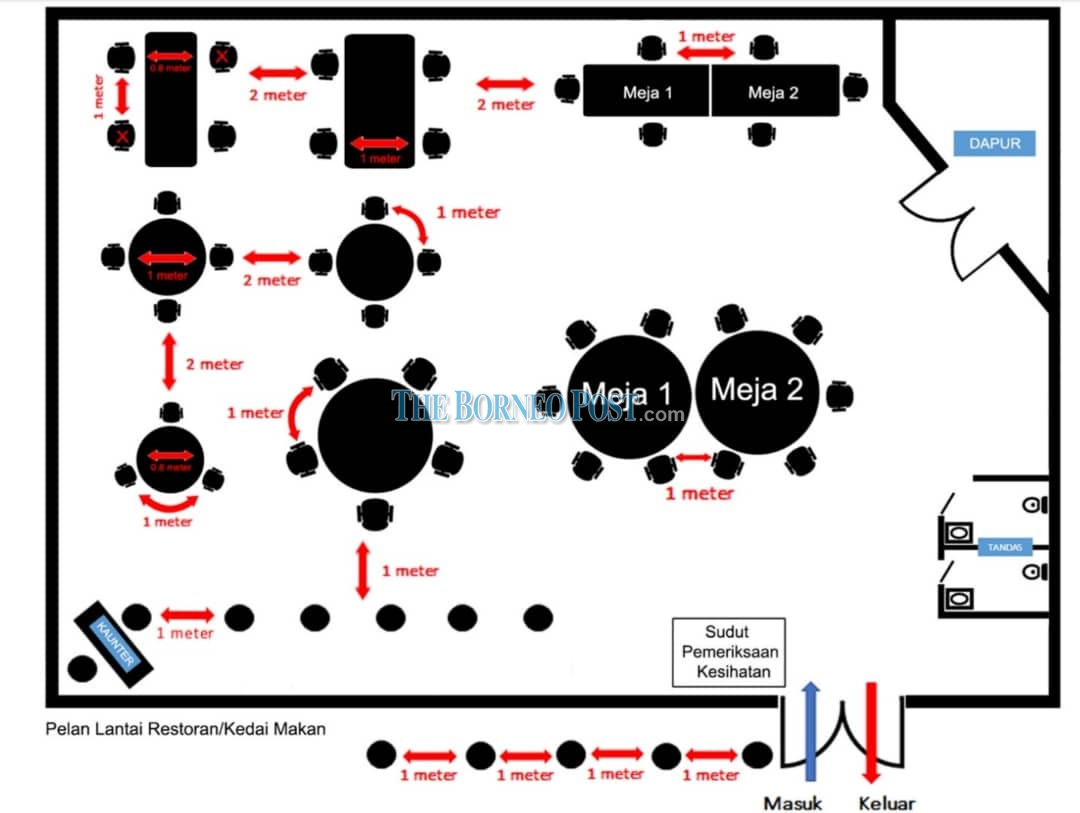 A diagram in Bahasa Malaysia on the new table arrangement now being allowed.

Dine in customers at food courts and hawker centres however cannot join tables if they come in a big group.

Sarawak Disaster Management Committee (SDMC) chairman Datuk Amar Douglas Uggah had announced at a press conference yesterday that the SOPs were being updated by MLGH following input by restaurants and kopitiam operators.

“The new addition to the SOP is made following discussion by MLGH and the operators. Therefore, seating arrangement would now allow dine-in customers to combine tables, sit together with their group and at the same time maintaining social distance of one metre,” he had said.

Uggah who is also Deputy Chief Minister said the updated SOP had been uploaded to the MLGH website for public viewing.

Meanwhile, most of the requirements mentioned in the previous SOP are still maintained in the updated SOP.

This included not yet allowing live entertainment performances (singing and dancing) to be performed at bistros during the current Recovery Movement Control Order (RMCO) period.