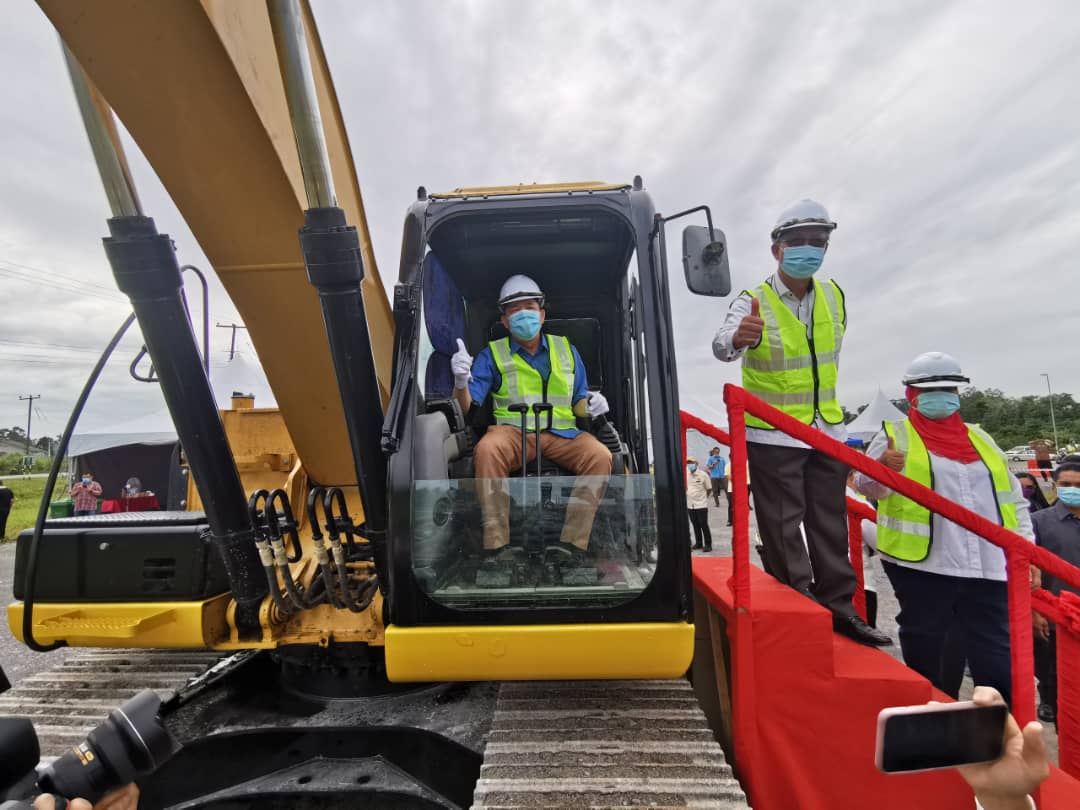 (From left) Fadillah, Julaihi and Rabiah show their thumbs up after the earth breaking ceremony. – Photo by Roystein Emmor

KOTA SAMARAHAN: Road users commuting to Kuching will have another option once the upgrading of the Route 8101 Jalan Datuk Mohd Musa to a four-lane road is completed by middle of 2023.

Senior Minister (Works) Datuk Seri Fadillah Yusof said this 11.6km road upgrading project, which costed around RM180 million, would solve the traffic congestion on this road which leads to Kota Sentosa from Samarahan.

“There are 43 schools and five government clinics in this area, and the number of people using this road is about 70,000 in one day. Because it is a two lane-road (single carriageway with one lane for each direction), there is often traffic congestion which inconvenienced the road users here.

“Following requests by the state assemblypersons and member of parliament from this area, and with support from state government, the federal government has agreed to approve funds to upgrade this road into a four-lane road. It will cost RM180 million, and expected to take 36 months to complete,” he told reporters after the earth breaking ceremony for the project today.

He said this project was in fact approved under the 11th Malaysian Plan (11MP) for the years 2016 to 2020 but it was delayed due to change of federal government in 2018 followed by the Movement Control Order (MCO) due to Covid-19 pandemic in March this year.

“The acceptance letter was issued in March, but due to the MCO we could only do the earth breaking today.

“Hopefully the contractor which was chosen through open tender can complete the project within schedule,” he said.

He nonetheless conceded there would be inconveniences caused by the construction work, due to the live traffic on the road which would pose challenge to those involved.

“The project may project may cause inconveniences but these conveniences will be temporarily. Therefore, if there is any problem there is no need to viral it on social media but refer it to JKR (Public Works Department) so that it can be solved amicably,” he added.

Meanwhile, Assistant Minister of Infrastructure and Ports Development Datuk Julaihi Narawi said the project has long been awaited by the people in Samarahan.

“Elected representatives from here have been requesting and asking about the status of this project. Now it will become reality, and it will not only ease the traffic congestion but also shorten the travelling time from Samarahan to 8th Mile Kuching-Serian road and vice versa,” he said.

She hoped the project would also lead to better street lighting and better drainage in that area.

“We in Samarahan are very happy that at long last, the federal government is doing something to improve this narrow but busy road into a dual carriageway,” he said.