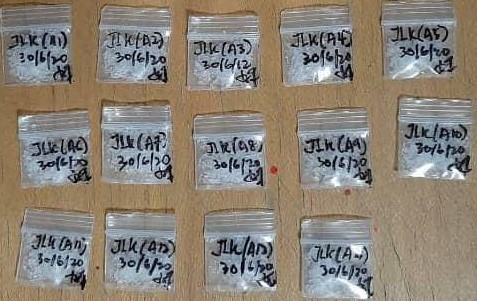 Drugs seized from the suspects during an ambush on a factory in Piasau Industrial area yesterday. – Picture by police

MIRI: The narcotics police have nabbed 23 people, including three women aged between 19 and 45, for suspected involvement in drug activities following a raid on a factory in Piasau Industrial yesterday (June 30).

“During the ambush, the team arrested a suspect on the upper floor of the factory and further inspection on him found one packet of crystalline substance suspected to be Syabu weighing 0.86g.

“The team then arrested another seven suspects on the ground floor and discovered 14 plastic packets containing crystalline substance suspected to be Syabu weighing 4.45g,” said Lim.

While raiding the premises, Lim said the team nabbed another 15 suspects who walked into the factory to buy drugs from the first eight suspects.

“All suspects were later tested positive for abusing the drug,” said Lim.