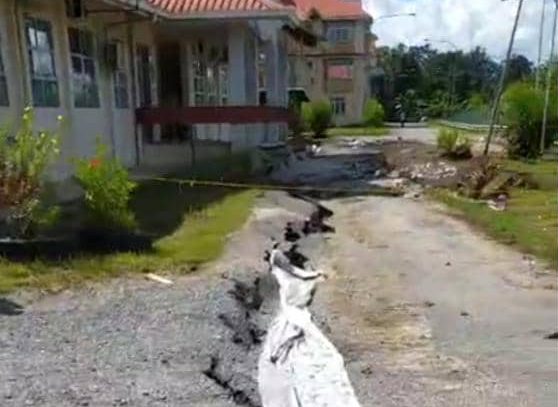 The fissure measuring some 30m in front of the Long Lama clinic.

MIRI: The cracked ground in front of Long Lama Health Clinic could have been caused by land clearing nearby for the construction of the Long Lama Rural Growth Centre (RGC), said Telang Usan assemblyman Dennis Ngau.

“Land clearing at the area near to the clinic for the purpose of developing our Long Lama RGC might have trigger land movement and caused the crack in front of the clinic.

“This is however my initial thought only, pending reply from the Public Works Department (PWD) which had carried out an investigation at the site on June 26,” said Ngau when contacted today.

He added that constant rainfall in the past weeks also contributed to the land slip.

Thus, Ngau suggested that a retention wall be built there to prevent further damage especially to the building’s structure.

“Having said that, we are still waiting for feedback from the experts on what should be done next,” he said.

Despite the cracked ground, the clinic, which is in Ngau’s constituency, remains open.

However, Ngau stressed that if the land slip worsens and pose a danger to those going for checkups, it should be temporarily closed.

“In the event that the clinic must be closed for the safety of our folk, I suggest we use the new Marudi District council office located nearby to be used as the temporary clinic,” he said.

The front entrance of the clinic has been sealed off due to the land slip, requiring visitirs to enter from the rear of the building.

The clinic receives about 100 patients daily from nearby villages and settlements.

Several videos went viral on social media yesterday, showing a fissure some 30m long in front of the clinic, leading many to believe that an earthquake had happened in the area.

Long Lama community leader, Penghulu Desmond Yap immediately responded to the video saying that it was not an earthquake, but a land slip instead.

Ngau also said that he has been in contact with the people in long Lama and he was monitoring the situation closely.

“I would like to urge the public especially those wanting to go to the clinic for checkup and also staff there to be extra careful when going there to avoid any untoward incident.

“Their safety is of paramount importance to me,” he said.