Friday, September 18
You are at:Home»News»Sabah»Landslide-hit roads being repaired 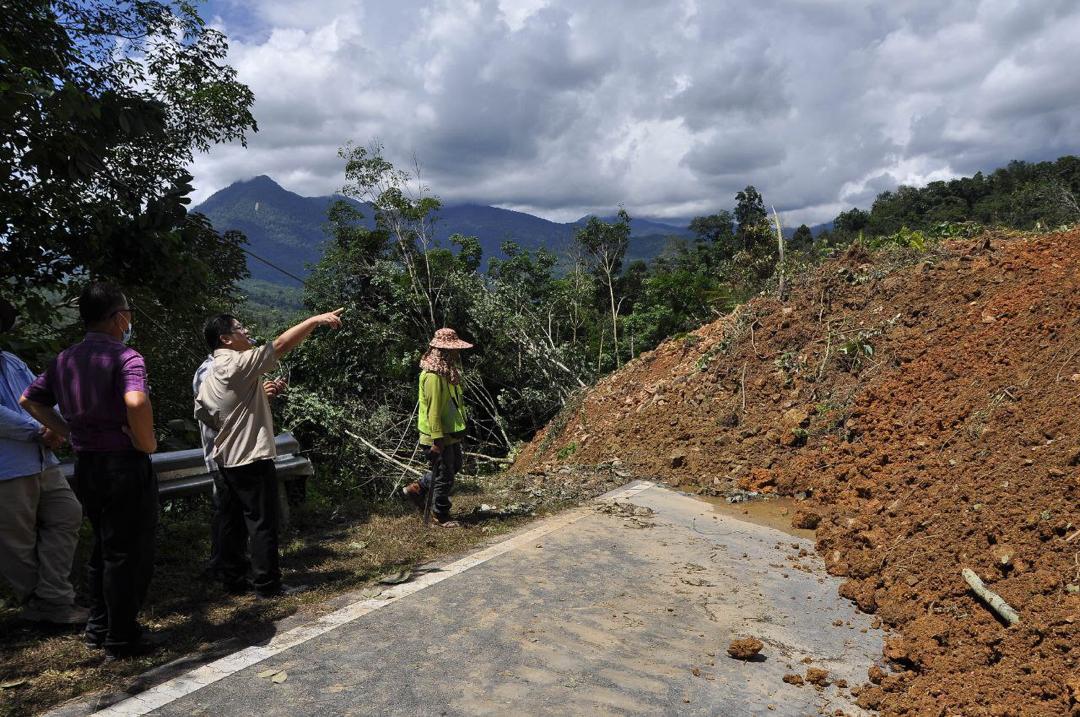 Ewon (second left) inspecting repair works being done at Jalan Melangkap, where a slope collapse rendered a 200-metre stretch of the road impassable to vehicles.

KOTA BELUD: Minister of Rural Development Datuk Ewon Benedick said he has inspected the roads damaged by landslides due to heavy rain which began Saturday evening.

Among the badly affected roads were Jalan Melangkap, Jalan Purak Ogis, Jalan Bongol, Jalan Tambatuon and Jalan Pompod, as well as some damage to other roads leading to villages in the Kadamaian area.

“The Public Works Department (JKR) as well as appointed concession companies are in works to repair and clean up traces of erosion on the roads. As of now, Jalan Melangkap is still inaccessible by all vehicles, however cleaning works are in progress. Other roads are now accessible,” said Ewon, after surveying the affected areas.

According to him, Jalan Melangkap experienced the most severe damage.

The slope which collapsed caused a 200-metre stretch of the road to be buried in eroded soil, which requires time to clean up.

Access to two schools, SK Melangkap and SK Gonsurai, were also cut off, in addition to a few community eco-tourism centres.

“Villagers affected were forced to use an alternative route, which is Jalan Melangkap-Podos-Taginambur.

“Jalan Pompod, on the other hand, is still submerged and is only accessible by heavy vehicles. I have instructed JKR Kota Belud to raise the level of the road along the 200-metre Jalan Pompod,” the minister said.

He said the number of villages and people affected in Kota Belud were still being recorded.

“In Kadamaian, the Community Development Leaders Unit (UPPM) are also helping to identify families affected, especially those in need of aid and food,” he added.

Food aid had been distributed to those in Kampung Pituru, Kampung Pompod, Kampung Rangalau, Kampung Ratau and Kampung Pangi, while pipes were given to Kampung Bundu Paka to repair the water gravity supply.

Ewon had also pledged to use his assemblyman allocations to repair some areas outside the jurisdiction of JKR and its concession companies.