Saturday, May 15
You are at:Home»News»First arrests under new HK security law 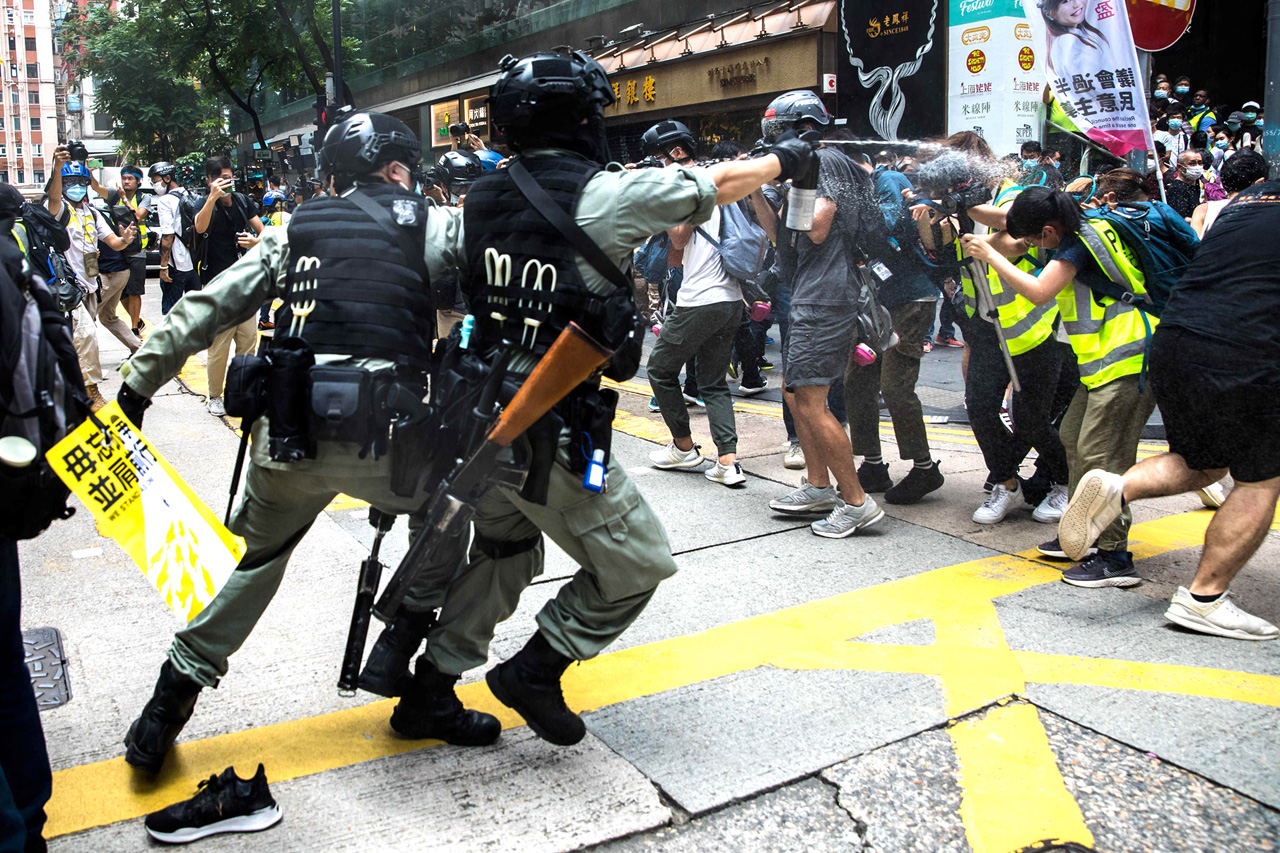 Riot police (left) deploy pepper spray toward journalists (right) as protesters gathered for a rally against a new national security law in Hong Kong on the 23rd anniversary of the city’s handover from Britain to China. — AFP photo

HONG KONG: Hong Kong police made the first arrests under Beijing’s new national security law yesterday as the anniversary of the city’s handover to China was met by thousands defying a ban on protests.

Police deployed water cannon, pepper spray and tear gas throughout the afternoon, arresting more than 180 people, seven of them for breaching the new national security law.

The confrontations came a day after China imposed its controversial legislation on the restless city, a historic move decried by many Western governments as an unprecedented assault on the finance hub’s liberties and autonomy.

Beijing said the law would restore stability. But its imposition sparked the worst unrest in months.

“Advocacy for independence of Hong Kong is against the law,” security minister John Lee told reporters.

Many of those protesting on Wednesday chanted independence slogans.

“What this authoritarian regime wants to do is to terrorise the people and stop them from coming out,” Chris To, a 49-year-old protester, told AFP.

Police said one officer was stabbed in the shoulder as he tried to make an arrest.

Opprobrium over the law poured in from critics and western governments — led by the US — over fears the law will usher in a new era of mainland-style political repression.

Under a deal ahead of the 1997 handover from Britain, authoritarian China guaranteed Hong Kong civil liberties as well as judicial and legislative autonomy until 2047 in a formula known as ‘One Country, Two Systems’.

“(China) promised 50 years of freedom to the Hong Kong people, and gave them only 23,” US Secretary of State Mike Pompeo said as he promised unspecified countermeasures.

But Beijing said foreign countries should keep quiet about the law, while Hong Kong leader Carrie Lam hailed the legislation as the ‘most important development’ since the city’s return to Beijing’s rule. 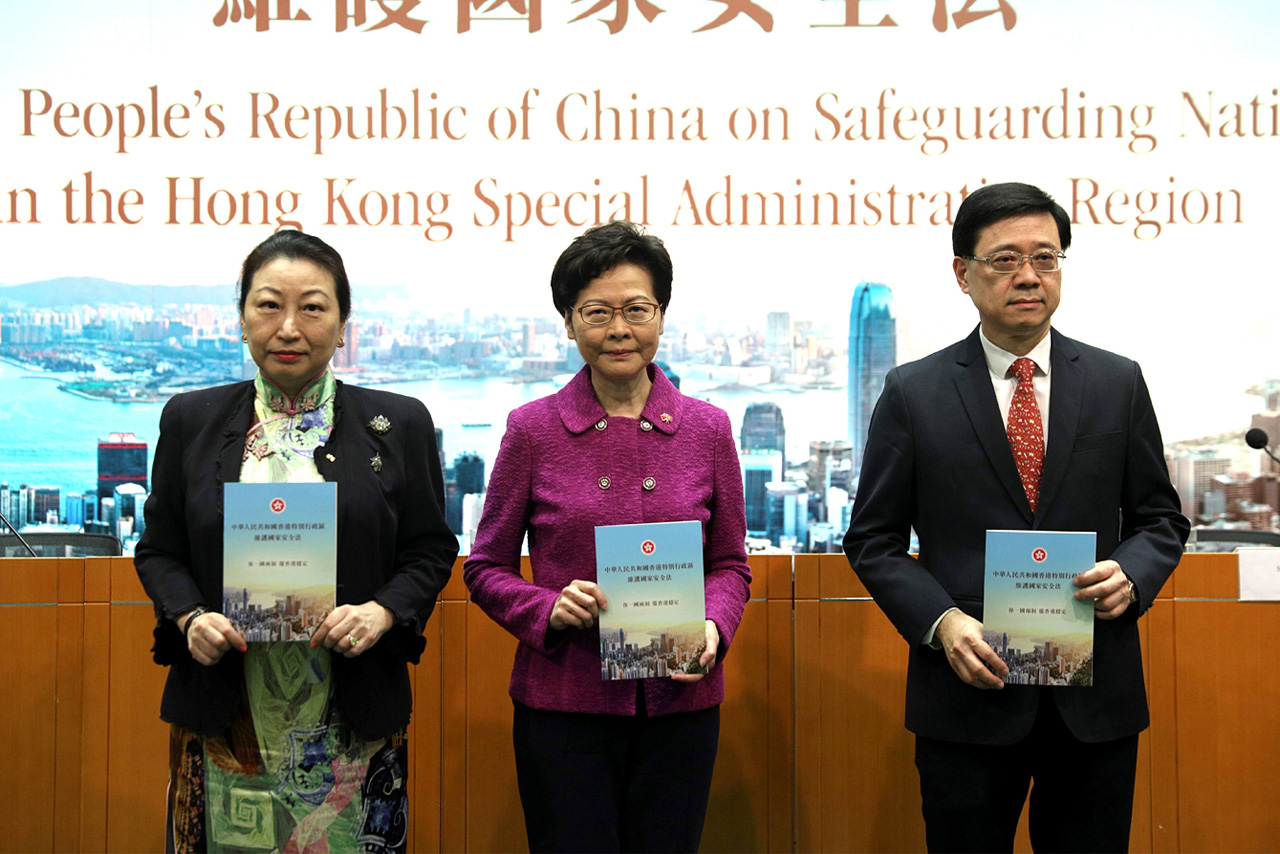 Gatherings of more than 50 people are currently banned under anti-coronavirus laws even though local transmissions have ended.

The July 1 anniversary has long been a polarising day in the city.

Beijing loyalists celebrate Hong Kong’s return to the Chinese motherland after a century and a half of what they consider humiliating colonial rule by Britain.

Helicopters  yesterday flew across Victoria Harbour carrying a large Chinese flag and a smaller Hong Kong pennant, while a barge appeared with a banner reading ‘Welcome the Enacting of the National Security Law’ in giant Chinese characters.

Democracy advocates have long used the date to hold large rallies as popular anger towards Beijing swells — although this year’s event was banned for the first time in 17 years.

During huge pro-democracy demonstrations last year, the city’s legislature was besieged and trashed by protesters.

The ‘One Country, Two Systems’ formula helped cement Hong Kong’s status as a world-class business hub, bolstered by an independent judiciary and political freedoms unseen on the mainland.

But critics have long accused Beijing of chipping away at that status and describe the new security law as the most brazen move yet.

It was passed in just six weeks, skipping Hong Kong’s fractious legislature, and the precise wording was kept secret until it came into effect late Tuesday.

It outlaws subversion, secession, terrorism and colluding with foreign forces to undermine national security, with sentences of up to life in prison.

It also topples the legal firewall that has existed between the city’s judiciary and the mainland’s party-controlled courts.

China will have jurisdiction over ‘serious’ cases and its security agencies will also be able to operate publicly in the city for the first time.

More than two dozen countries — including Britain, France, Germany and Japan — urged Beijing to reconsider the law, saying it undermines the city’s freedoms.

Canada, meanwhile, warned citizens in Hong Kong that they faced an increased risk of arbitrary detention or even extradition to China.

Beijing says the law will not end Hong Kong’s freedoms but critics have little faith in those assurances, given how similar national security laws are routinely used on the mainland to crush dissent. — AFP