Sunday, October 17
You are at:Home»News»Work on MRSM Lawas to start soon — Abdul Latiff 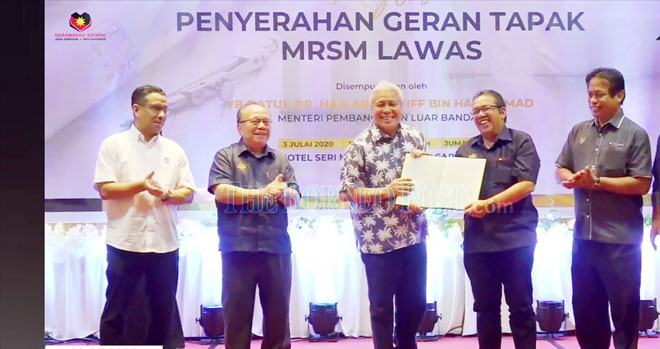 LAWAS: Work on the RM140-million Mara Junior Science College (MRSM) here is to start soon while the college is scheduled to be fully operational by 2024.

Rural Development Minister Datuk Dr Abdul Latiff Ahmad said the MRSM Lawas is the fifth in the state, including one under construction in Bintulu which is scheduled for completion in 2022.

Three others in operation – MRSM Kuching, MRSM Betong and MRSM Mukah – were jointly developed by Mara, Petronas and the Sarawak state government.

“MRSM Lawas is another evidence of the federal and state governments’ commitment to continue to develop the best educational infrastructure in rural Sarawak to meet the demand for skilled human capital,” he said here yesterday at the handing-over of land grant for the project from the state government.

Abdul Latiff said MRSM has been a driving force in secondary education excellence since its formation in 1972 and has produced 178,683 alumni actively contributing in various fields of development in the country.

“Currently, there are 53 MRSM branches in the country including five in Sarawak. MRSM Kuching, Mukah and Betong have a total of 2,172 students and so far they have produced 4,698 alumni and majority of them are Sarawakians,” he said.

As for MRSM Bintulu and Lawas, each could take in 450 students from Form Three to Form Five, he added.

On the Lawas MRSM, he said it has been approved under the 11th Malaysia Plan in 2019 and will be built on a 35-acre site, seven kilometres away from Lawas Town.

“The project site is close to the main roads connecting Lawas, Limbang and Miri in Sarawak, Sipitang in Sabah and Temburung in Brunei,” he said.

Among the facilities to be available are administrative and academic blocks, hostels, surau, student centre, multipurpose hall, recreational courts, staff and teachers quarters.

Previous ArticleFormer students of St Joseph’s raise RM10,000 to buy face masks for needy
Next Article Productive things to do during breaks from job-searching