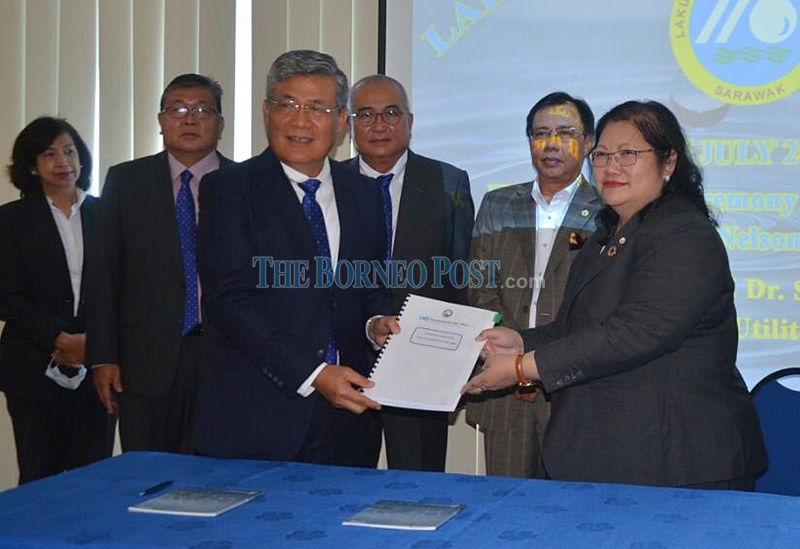 MIRI: The Sarawak government has no intention to raise its water and electricity tariff especially now when the people have been hit hard by the Covid-19 pandemic, said Utilities Minister Datuk Seri Dr Stephen Rundi Utom.

He told reporters here today that the state would look at other means to raise its revenue instead of burdening the people further with the tariff.

“I know that the people in the peninsula are talking about tariff and so on. I must reiterate here that we have no intention to increase or raise the tariff for water and electricity in Sarawak,” he said.

Dr Rundi said this after witnessing the handing over ceremony for the chairmanship of utility company, Laku Management Sdn. Bhd, from Dato Ir Alice Jawan Empaling to Datuk Nelson Balang Rining, whose appointment was effective Feb 20 this year.

Emphasising that the state government understood the people’s hardship, particularly those in the low income group, Dr Rundi said the government had given the people a rebate of about 1,300 litres of free water or RM5.

And recently, with the Covid-19 pandemic, we reduced it further whereby households enjoy 25 percent discount, while those under industrial or commercial consumer enjoy between 5 to 25 percent discounts on both electricity and water,” he said, adding that the discounts were for a six months period until September.

Asked if Sarawak will follow the federal government’s move to extend the discount on electricity bills until the end of the year, Dr Rundi said a decision will be made later depending on how the Covid-19 situation develops in the state.

Last week, federal Energy and Natural Resources Minister Datuk Shamsul Anuar Nasarah announced that domestic electricity users across Malaysia would continue to enjoy discounts until the end of the year.

The two per cent discount for users in East Malaysia will benefit around 520,000 users in Sabah and 580,000 in Sarawak, he said.

Meanwhile, Dr Rundi, when asked on the progress of the raw water transfer project from Batang Baram to Bakong river, said the project was ongoing despite some delays, including with contract works, due to the Covid-19 pandemic.

“Due to these issues, the project is expected to be completed by end of 2021. A bit of delay, but this project is very critical because your (northern region) source of water supply is critical,” he said.

The raw water transfer project from Batang Baram to Bakong river started in April 2019 as a long term solution to water supplies in Miri.

During the drought season, the raw water from Sungai Liku is not sufficient to supply water throughout Miri, hence it need to pump water from Bakong river. The project costs RM226 million.