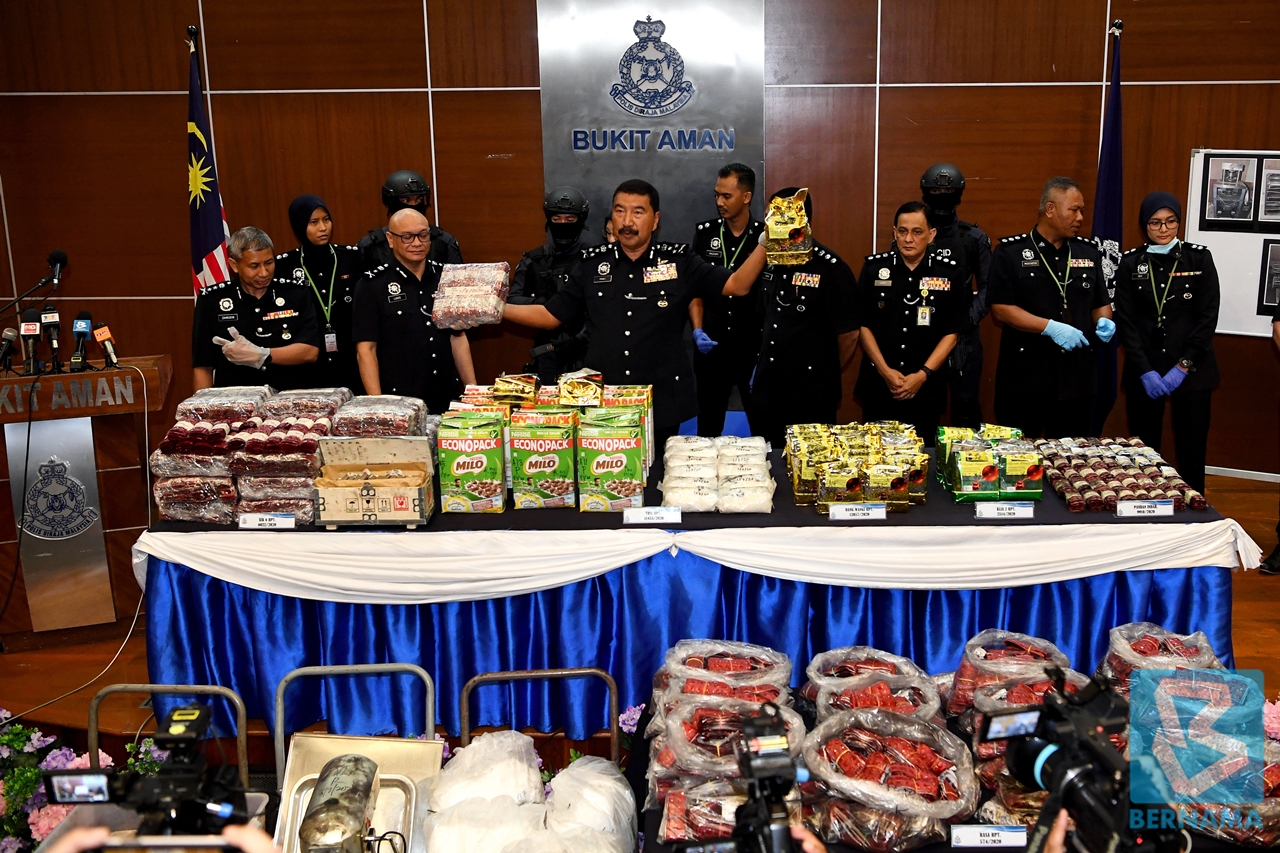 The NCID director Datuk Ramli Din told a press conference in Bukit Aman today that 12 raids were carried out in Kuala Lumpur, Selangor, Johor and Sarawak in an operation dubbed, Ops Nutcracker, from July 1 to 6.

“A total of 182kg of various types of drugs were seized and these drugs are estimated to be worth RM10 million. With that amount of drugs, it can cater to 580,000 drug users,” he said, adding that the drugs were Eramin 5, syabu and ketamine.

“This is the biggest success for drugs brought into Sarawak thus far” he said, adding that the syndicates also supplied drugs to Sarawak’s neighbours, Indonesia and Brunei.

Ramli pointed out among the 14 suspects aged between 26 and 58, were an Assistant Superintendent of Police (ASP) and a Sub-Inspector (SI) who were stationed in Sarawak.

“They (the senior police officers) are believed to be in cahoots with one of the syndicates,” he said.

Going into the details of the operation, he said raids on the first syndicate were carried out simultaneously at four locations on July 1 in the Klang Valley

Ramli said during the raid on an area in Shah Alam, where the raiding team nabbed two men aged 39 and 41 and seized 145,250 Eramin 5 pills, the police were led to a drug lab.

“The NCID team on July 3 uncovered an illegal lab in Batang Kali, Selangor. Based on our investigation, this lab has been operating since Sept 2019,” he said, adding that seven individuals were arrested.

Ramli added the raiding team seized a total of 266,750 Eramin 5 pills from the lab and several types of chemical precursors weighing 440kg.

He disclosed that the lab was capable of producing 70,000 Eramin 5 pills worth RM1 million at a time and that it produced drugs three to five times a week.

In the bust on the second syndicate, Ramli said two men, both 36 years old, were arrested on July 4 at KLIA2.

“During their arrest, police seized 8.8kg of syabu. On July 6, another syndicate member, a woman was nabbed at KLIA,” said Ramli.

On their modus operandi, Ramli revealed that the syndicates had used drug mules who are either Sarawakians or West Malaysians who resided in the state or travelled frequently to the state.

“The first syndicate flies its drug mules from Sarawak to Kuala Lumpur, and places them at five-star hotels.

“And at these hotels, the drugs are packed into boxes which then become part of their luggage when they return to Sarawak via KLIA and KLIA 2,” said Ramli.

He said the second syndicate used locals from the peninsula who had moved to Sarawak or lived in the peninsula but travelled frequently to the state.

“Based on our initial investigation, the second syndicate had made 28 deliveries since 2017. Each delivery needed one to three drug mules and this syndicate had been operating for quite long,” he said.

On the arrest of the two senior police officers, Ramli said the duo would be investigated under Section 3(1) of the Dangerous Drugs (Special Preventative Measures) Act 1985.

The other 12 suspects will be investigated under Section 39B of the Dangerous Drug Act 1952 for drug trafficking which carries mandatory death sentence upon conviction.

“Apart from that, NCID will be taking action against them under the Forfeiture of Property Act 1988 where we had so far confiscated properties worth RM1.07mil,” Ramli said, adding that investigations were underway to look for more property obtained through profits made from selling the drugs.

Ramli stressed that NCID would continue with its fight against drugs and would not compromise with anyone, including if they are police officers.