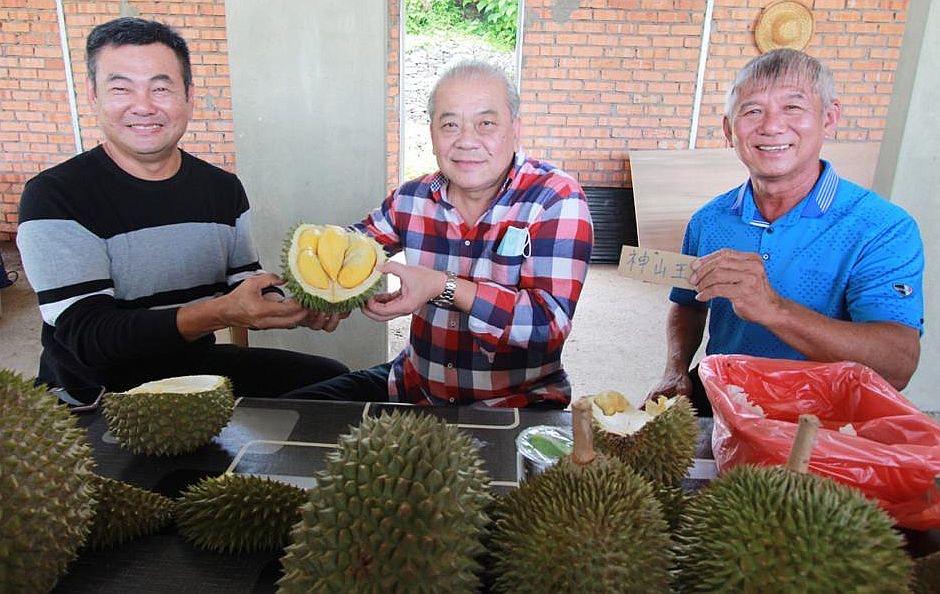 Goh (center) and Tong (left) with the Kinabalu King durian, while Gan (right) looks on during the durian-tasting session.

KOTA KINABALU: Huazong president Tan Sri T.C Goh has called on the government to open up agriculture lands to encourage the people to venture into durian farming, as one way of boosting exports to earn more foreign revenues, and to stimulate the economy of Malaysia.

Noting that the returns for durian farming is comparatively higher than palm oil plantation, he urged state governments to strive to tap into the huge economic potential of the durian industry, right from durian farming to downstream processing. He believed such a direction would better boost Malaysia’s position as the leading durian producer in the global market. Malaysian durians are known to have a huge following among durian lovers worldwide, China and Hong Kong especially.

He cited for example, Sabah’s very own ‘Kinabalu King’ species of durian which is fast becoming popular among local durian lovers since it was introduced in the market, last year, should be better promoted in the overseas market.

Goh, who is also the president of The Federation of Chinese Associations Sabah (FCAS) said this after attending the durian tasting session hosted by the founder of the ‘Kinabalu King’ species,   Gan Hock Chew here on Wednesday. Also present at the occasion were Gan’s partners Lee Lye Soon and Tong Goh Keong, and a few other business associates.

He was informed by Gan that the Kinabalu King durian species was actually the award-winning ‘A14’ durian species from Penang which he brought into Sabah many years ago.

The ‘A14’ durian species was awarded the champion among the many durian species back in 1992. Gan latter decided to rename it as the ‘Kinabalu King’ species, after he succeeded in propagating it in Sabah.

It was first introduced in the local market last year and has received encouraging response and praises from local durian enthusiasts.

After giving it a try for the first time, Goh too was greatly impressed with its fine quality and flavour.
“This Kinabalu King species has great potential to become a popular species and it should be recommended and widely promoted in the market,” he said.

Goh acknowledged that durian has huge potential to be commercially-developed into a high-end and high-margin agriculture product for Sabah which happens to have vast acreage of idle agriculture lands.

“And places like Sandakan, Ranau, Sipitang, Tuaran, Keningau and the interior of Sabah, had been identified to possess the type of lands and climate that are suitable for durian farming,” he pointed out.

He also believed the current dwindling demand for durians in the local market, mainly due to the ongoing Covid-19 ‘lockdown’ barring foreign tourists from coming into Malaysia, is just a temporary setback.

“Durian industry players in the country should take this opportunity to better prepare for the market rebound and a surge in the demand, when the Covid-19 pandemic is well under control, and the tourists start coming to Malaysia again,” he said.

Goh also observed that, with large-scale commercial plantation of durians, the much-sought-after Musang King species especially, fast developing in Sabah over the years, Sabah is poised to become a leading Musang King durian producer and exporter, in the near future.