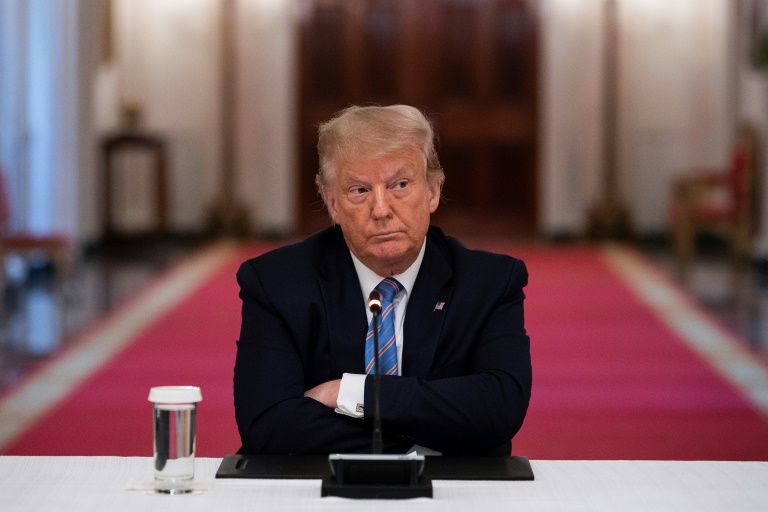 US President Donald Trump sits with arms crossed during a Wite House roundtable discussion on the Safe Reopening of America’s Schools on July 7, 2020. AFP Photo

WASHINGTON: The United States on Wednesday passed another grim coronavirus milestone with three million confirmed cases, as President Donald Trump downplayed the risks posed by the pandemic and aggressively pushed for schools to reopen.

The coronavirus is surging in several southern hotspots including Texas, Florida, Louisiana and Arizona, while it has almost entirely receded from its former epicenter in New York and the north-east.

Johns Hopkins University put the total at 3,009,611, in its real-time tally of confirmed COVID-19 cases.

“At this point, we have tested more than 39 million Americans,” US Vice President Mike Pence told reporters.

Trump embarked on a morning tweetstorm ahead of a public meeting of his coronavirus task force, in which he called for students to return to their schools in fall and lashed out at his own top health agency.

“In Germany, Denmark, Norway, Sweden and many other countries, SCHOOLS ARE OPEN WITH NO PROBLEMS,” he said.

“The Dems think it would be bad for them politically if U.S. schools open before the November Election, but is important for the children & families. May cut off funding if not open!”

He added that he disagreed with guidance for reopening schools set out by the Centers for Disease Control and Prevention and would be “meeting with them!!!”

Sending children back to school is vital if parents are to return to manufacturing and other jobs that require their physical presence.

All of the countries mentioned by Trump have far smaller epidemics than the United States, while Sweden is viewed by many public health experts as a cautionary tale after shunning lockdowns and experiencing a high death rate.

America is by far the hardest-hit country in the world, with more than 130,000 deaths — even as the fatality rate has fallen from highs seen during the late spring peak.

In April and May, as many as 3,000 people were dying each day, while for the past few days it has been around 600.

These include far greater levels of testing picking up more mild cases, a younger population becoming infected, better treatments — and the lag time between infection and death among the sickest patients.

In terms of treatments, doctors have learned that placing patients with severe breathing problems on their stomachs, known as the “prone” position, can ease the burden on their lungs.

They are also using blood thinners preventatively to avoid life-threatening clots in the lungs, brain, and limbs; and using steroids like dexamethasone to reduce an abnormal autoimmune response that ravages the organs.

The anti-viral remdesivir meanwhile has been shown to reduce the duration of hospital stays, but has not so far been proven to have a significant impact on mortality.

The US epidemic has also become far younger, with the median age for new cases in Florida fluctuating in the mid-30s, for example.

In the greater Phoenix area, the major center of the contagion in Arizona, half are under the age of 35.

These young people could in turn go on to infect the elderly or medically vulnerable, which would once more increase the death rate.

The US department of health has embarked on a surge testing campaign in several sites in the south in order to better track mild or asymptomatic cases. – AFP