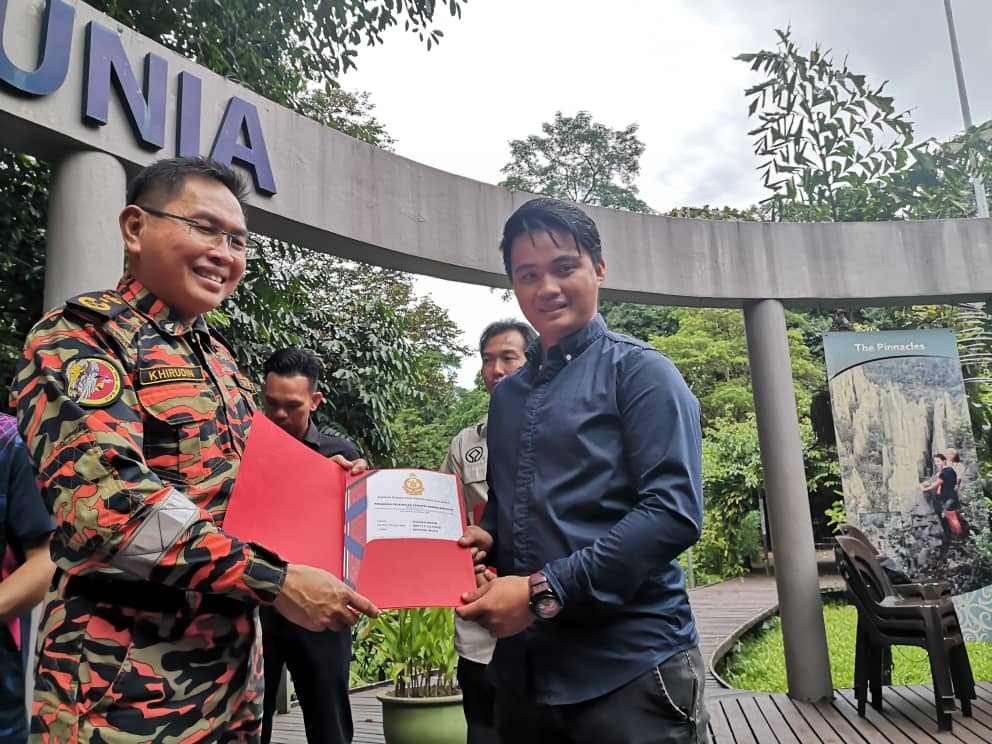 Khirudin (left) hands over a Moscar appointment letter to the brother of the late Roviezal at the ceremony.

MIRI: Sarawak Fire and Rescue Department (JPBM) has launched a special search and rescue (SAR) team to handle SAR operations in mountains and caves as well as forest fires in Mulu National Park.

The move comes after several incidents, including a drowning incident in Deer Cave which befell a Dutch tourist and a local tour guide on July 12 last year, exactly a year ago today, said Bomba Sarawak director Khirudin Drahman.

“The incident really tested the department’s preparedness in the face of incidents.

“Similarly, the forest fires in Bukit Batu Bungan, which demanded the department to find immediate solution. (The special SAR team) is so that any incident that occurs in Mulu National Park can be dealt with in a short period of time and further enhance the department’s response time,” said Khirudin in a press statement today.

According to Khirudin, the idea to establish the Mulu National Park Mount Cave Search and Rescue (Mocsar) team started since 2017 whereby JBPM Sarawak has carried out a rescue training involving the STORM (Special Tactical Operation Rescue Management) unit at Mulu National Park for a week.

“After several discussions and the proposal for its establishment has been considered and approved by the top management from JPBM headquarters, a history of sorts has been created today with the establishment of the special Mocsar team at Mulu National Park.

“With this Mocsar team, tourists’ confidence to visit Mulu National Park will be enhanced and it can further boost the Sarawak tourism industry,” he pointed out.

“The team will be required to undergo training in various forms and modules at least 12 hours a week to continuously improve their skills.

Khirudin emphasised that the Mocsar team would be responsible in handling forest fires as well as search and rescue operations in mountains and caves.

“In addition, they will also be given the skills to provide early treatment for victims who suffered injuries while climbing mountains and caves.

“Acting as first responders, the Mocsar team will be trained in skills using communication tools and this is necessary to facilitate communication with the State Operations Centre when attending to any incident,” he said.

The eleven members of Mulu National Park Mocsar were given an appointment letter each by Khirudin during a launching ceremony of the team in Mulu today (July 12).

During the event, Khirudin also presented 30 fire extinguishers to three villages in Mulu namely Kpg Melinau, Kpg Batu Bungan and Kpg Long Iman, as well as a certificate in appreciation and recognition of the late Roviezal Robin who was killed in the drowning incident in Mulu National Park which was handed to his family member.