Sunday, September 20
You are at:Home»News»Nation»Malaysia Cartoon and Comic House brings back nostalgia of past cartoons 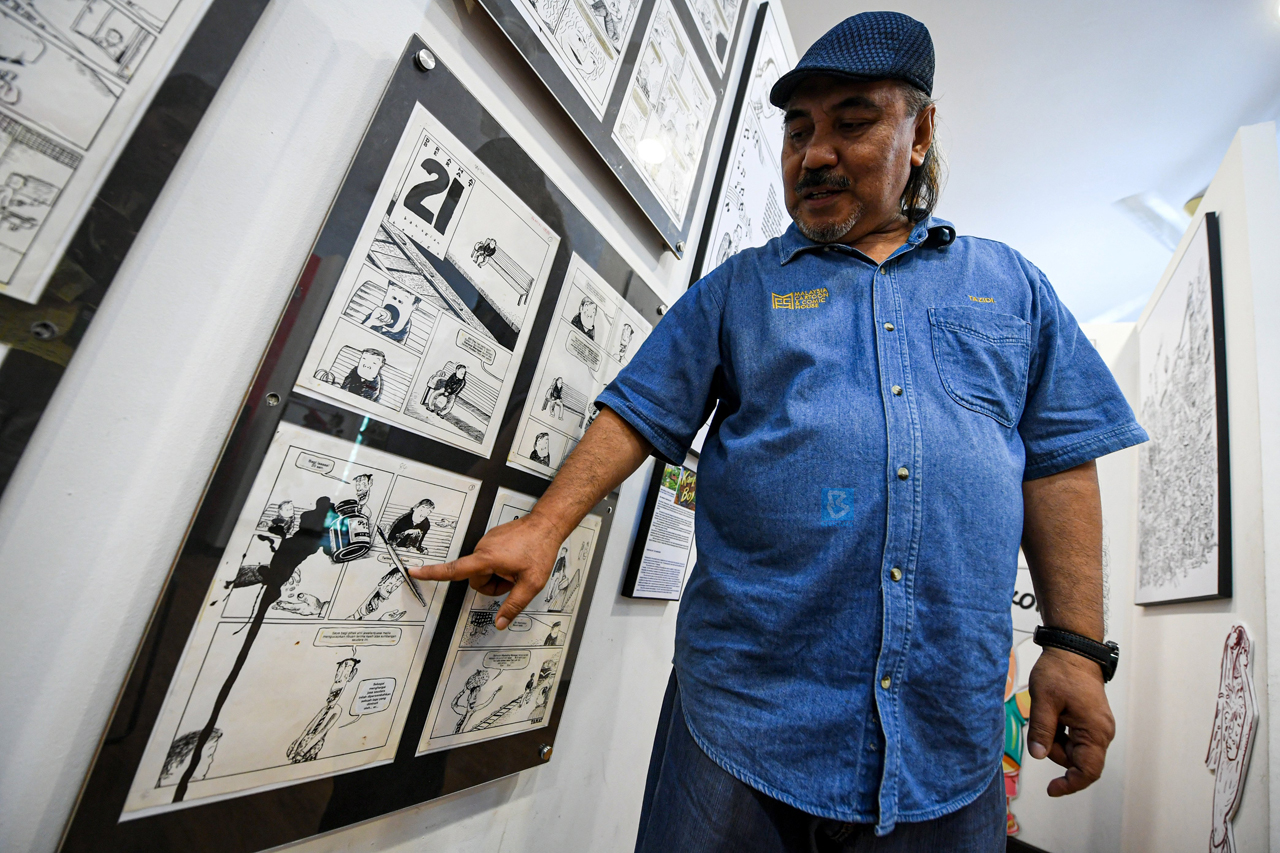 Tazidi shows comics of Nor Khalid on display at Malaysia Cartoon and Comic House. — Bernama photo

KUALA LUMPUR: Who would have thought that a magazine that once priced at RM1 can now fetch up to RM9,000.

Such is the value of the first edition of ‘Gila-Gila’, the most illustrious satirical magazine in the country, published on April 1, 1978, which is now worth nearly RM9,000.

The price can be a put off for local comics fans, but fret not, as it is one of 500 works on permanent display at the Malaysia Cartoon and Comic House (MCCH) at Taman Tasik Perdana here.

MCCH curator, Mohd Safwan Mohd Ariffin, said that hundreds of artworks on display at the centre also include old copies of other famous satirical magazines of the 1980s such as ‘Ujang’, ‘Geli Hati’ and ‘Batu Api’, involving over 50 cartoonists.

Mohd Safwan, better known as cartoonist Pauh to his fans, said that most of the rare collections were contributed by collectors who were die-hard fans of the magazines.

“Publishing companies and cartoonists themselves do not own these collections, since publications were done manually at that time. As such when the house was established in 2017, these collectors have contributed hugely to make it a success”, he told Bernama recently.

Mohd Safwan said among artworks on display at the 1,000 square foot house, are those from famous local cartoonists such as Datuk Mohammad Nor Mohammad Khalid or Lat, Sulaiman Awang, Raja Hamzah and Osman Baru.

He said the house also served as centre to preserve comics from the Japanese occupation era, published in the 1940s from the then newspapers and magazines, namely ‘Malai Sinpo’, ‘Malay Mail’, ‘Syonan Times’ and ‘Semangat Asia’.

“Cartoons were part of propaganda medium during the Japanese occupation in Malaya, which lasted for three years and eight months, and this showed that cartoons were not solely for entertainment”, Mohd Safwan explained.

He said MCCH is not only an archive for these legendary drawings, it also served as a platform for cartoonists to showcase their works and deliver messages on current social issues in a creative way, hence providing society with fresh and relevant contents. Meanwhile, MCCH exhibition manager Tazidi Yusof said the house would feature new batches of artworks according to themes on current issues every three or four months.

“For example, currently we are organising the ‘Cartoonists vs Covid-19’ exhibition until Aug 31, with over 50 artworks on display from Malaysian cartoonists, as well as Indonesian and Singaporean artists.

“At the next change, we will display artworks related to independence”, he said.

“There were cartoonists from overseas who came and spent hours observing our artists’ works”, he said, adding that there were plans to hold cartoon and comic drawing classes for young people at the house in the future.

According to Tazidi, apart from being an exhibition centre, the MCCH has also served as a meeting point for more than 100 cartoonists from all over the country to share ideas in ensuring the industry remain relevant and sustainable. — Bernama