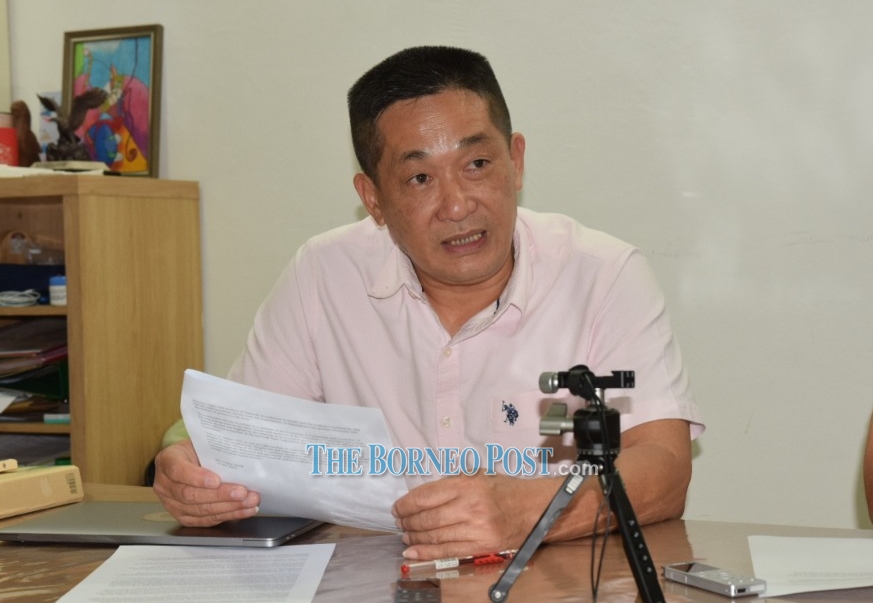 “With my resignation, I wish to put on record my fervent protest against any unauthorised, illegitimate and improper conduct of the Sarawak State Government which may arise from the lack of transparency in its negotiation with Petronas and the federal government for settlement of the state sales tax owed by Petronas to Sarawak, acting outside the purview of the Sarawak State Legislative Assembly and the MA63 Consultative Committee,” he said during a press conference today.

See, who is a Parti Sarawak Bersatu Presidential Council member, was referring to the recent announcement by the Deputy Chief Minister Datuk Amar Awang Tengah Ali Hasan that the settlement and agreement between national oil company Petronas and Sarawak in regards to the payment of the Sarawak Sales Tax (SST) would be made known after Aug 3.

Awang Tengah revealed that a joint committee consisting of members from the Sarawak government, the federal government and Petronas was still in the midst of negotiating the finer details of the terms and conditions, and would only announce the outcome when the time comes.

Prior to this, the Chief Minister Datuk Patinggi Abang Johari Tun Openg had on June 12, after chairing the Parti Pesaka Bumiputera Bersatu (PBB) supreme council meeting in Kuching, first made known that the Sarawak State Government had set up a working committee that has the executive power to negotiate with Petronas and the federal Government under Awang Tengah as the committee chairman and also “another committee under our legislators, the Consultative Committee that will look into the legal implications and our laws that govern our oil and gas industry”.

“We are repeating the mistake that was made in 1975 when a person or a group of persons, chose to carry out an executive decision and action, to ignore and defy the Sarawak Constitution and the authority of the Sarawak State Legislative Assembly, to negotiate and determine the fundamental and constitutional rights of Sarawak and all Sarawakians,” See opined.

He said in 1975, by the exercising of an executive power and action which is abhorred by all Sarawakians now, the then Chief Minister had agreed to divest Sarawak’s ownership of the state’s petroleum resources within its territory to Petronas, after and pursuant to the enactment of the controversial Petroleum Development Act 1974 (PDA 1974) which violated Sarawak’s sovereign and constitutional rights to the state’s territorial domain and natural resources found therein.

“Our Sarawak State Legislative Assembly MA63 Consultative Committee had decided that the PDA 1974, together with the Continental Shelf Act 1966 and the Territorial Sea Act 2012, contravene Article 2(b) of the Federal Constitution.

“Any act or conduct, to continue to legitimise these unconstitutional federal legislatures, is  tantamount to a repudiation of the Sarawak (Alteration of Boundaries) Order in Council 1954, the Sarawak Land Code 1958, the Sarawak Oil and Mining Ordinance 1958, the Sales Tax Ordinance 1988 and our Malaysia Agreement 1963 (MA63),” he added.

See said the Sarawak DUN Consultative Committee had therefore categorically expressed its cardinal principle to safeguard the state’s sovereign rights to petroleum found within its territory as its inalienable rights and non-negotiable.

“It does not matter how much the Sarawak State Government can negotiate on the payment of the State Sales Tax. The High Court had already ruled on March 13 that Sarawak is constitutionally empowered to impose sales tax under Article 95B(3) of the Federal Constitution.

“It is the decision of the Court that the State Sales Tax (SST) Ordinance and any subsidiary legislation made under it, including specifically the State Sales Tax (Taxable Goods and Rate of Tax) (Amendment)(No. 2) Order, 2018, are legal, constitutional and valid, and henceforth, the notice of assessment of sales tax issued to Petronas by the Sarawak Treasury.

“For the year 2019 alone, it is believed that Sarawak is seeking for the RM2.878 billion SST which Petronas has not paid.”

However, See said until today, members of the negotiating team appointed by the Consultative Committee have yet to meet.

Yet, the joint committee said to consist members from the Sarawak government, the federal government and Petronas are already in the midst of negotiating the finer details of the terms and conditions for the settlement and agreement between Sarawak and Petronas, See said.

“It is most unfortunate that the Chief Minister and the state government has chosen to negotiate with the federal government and Petronas by exercising its executive power.

“By conducting itself outside the purview of the Sarawak State Legislative Assembly and the MA63 Consultative Committee, the process is no longer transparent and is in danger of being labelled unauthorised, illegitimate and improper.

“The DUN has spoken about the former Chief Minister having illegally and improperly exercised his executive power in 1975 which had thereby caused Sarawak to be deprived of its power, rights and privileges over the ownership and control of our wealth in petroleum resources, but we are about to witness the same unauthorised, illegitimate and improper exercise of executive power being repeated 45 years later. It is worse in this occasion because it is done by knowingly and intentionally ignoring and defying the command and aspirations of the DUN.”

See said the trampling of the wishes of the DUN is an oppression and a defiance of the Assembly which expressly required that the representations from the Sarawak representatives must be consistent with the objective of advancing and safeguarding the special interests, rights and position of Sarawak as enshrined in MA63 and the Federal Constitution, and that the representations should meet the expectations of Sarawakians for greater autonomy and devolution of powers to the state.

“This is no longer 1975. It will not take another 45 years for the DUN and Sarawakians to be enraged by any unauthorised, illegitimate and improper conduct of the executive power. I would expect the next sitting of the DUN to question, invalidate and nullify the use of such executive power to negotiate settlement and agreement with Petronas, with regards our sovereign and autonomous rights and interests of Sarawak and Sarawakians, to our territorial domain and all natural resources found therein.”