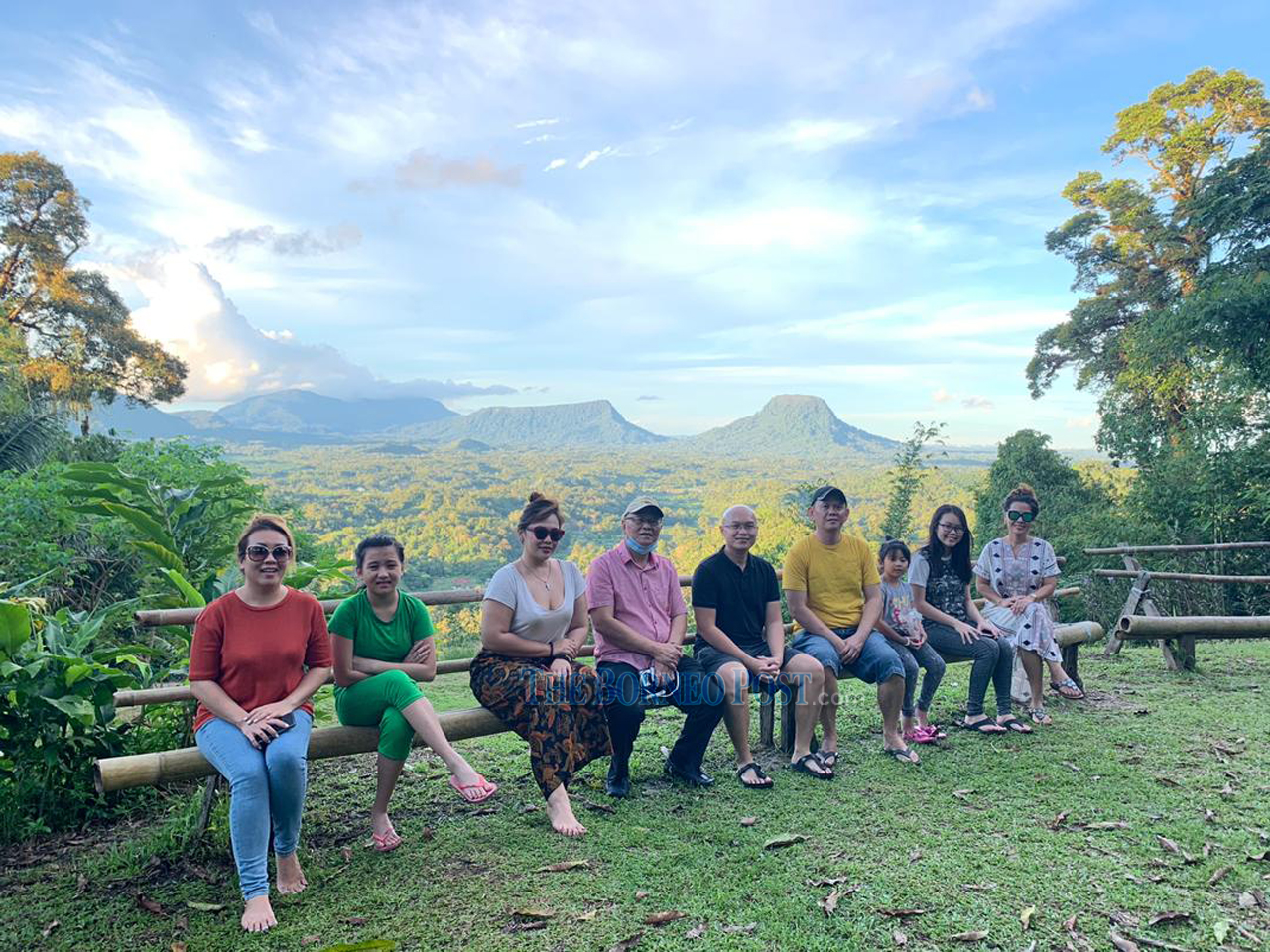 Minos (fourth left) and his family members gather for a group photo on the summit of Bung Bratak, with Mount Singgai and Mount Serapi seen in the background.

He reveals the new Heritage Trail Two, which has opened leads to the summit of Bung Bratak, a 1,000-foot hill traced as the ancestral home of the Bidayuhs of the Jagoi-Bratak group.

“The locals call the summit ‘Robuh Guru’ as it was where our ancestors trained themselves to defend the settlement against enemy attacks,” he said.

According to Minos, Bung Bratak summit has a space the size of a football field suitable for camping and outdoor activities, which would be very popular once fully developed.

“When we have the funding, we will build a 30-f00t high ‘Baruk’ (ceremonial roundhouse) there.

“The mountain scenery from this summit is simply fantastic  –with Mount Singgai, Mount Serapi and parts of Kuching City clearly visible in good weather. Tourists and visitors would love it,” he said.

On a related matter, Minos said many people visited the BBHC last weekend, in view of the easing of restrictions under the Recovery Movement Control Order (RMCO), to enjoy nature on the walk up the hill and visit the facilities there.

“It was totally unexpected. All took the half-hour walk up to BBHC instead of driving. When asked, all answered they did it for exercise while enjoying the fresh mountain air and the wild flora and fauna.

“By next weekend or next month, at least 1,000 people are expected to visit and trek up to Bung Bratak on Saturdays and Sundays.  Bung Bratak is getting very popular because like what the visitors said, it is the best hill spot around to improve lungs and hearts during this Covid-19 pandemic,” he said.

Initiated and developed by BBHA, the BBHC is fully financed by the federal Ministry of Tourism. It was constructed by the Public Works Department (JKR) Sarawak at the cost RM8 million through an appointed contractor.

The centre, which was completed in 2018, has two traditional longhouses – one is able to accommodate up to

100 people, while the other houses a seminar / conference hall, an office and a mini museum on Dayak arts and culture.