Friday, September 24
You are at:Home»News»Nation»Not easy to get Malaysia citizenship without producing valid documentation- Hamzah 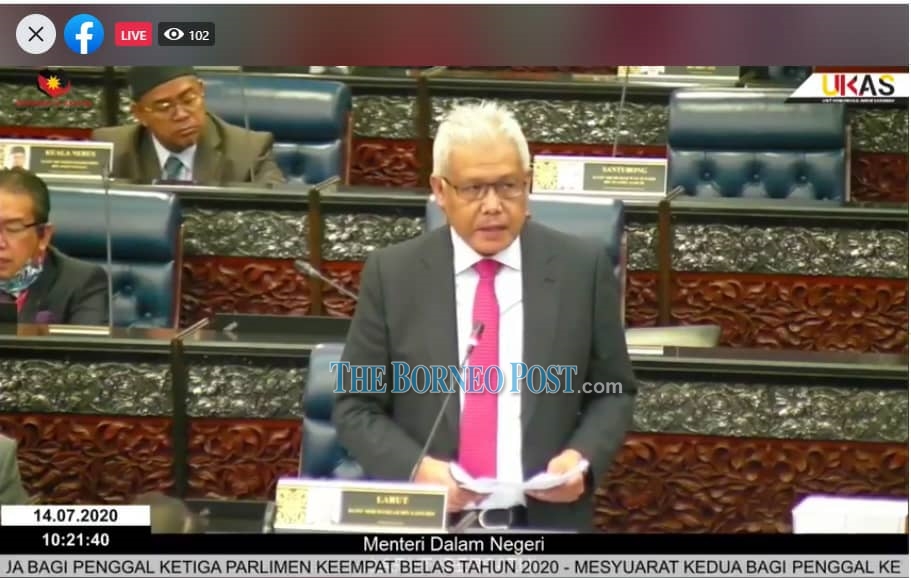 Hamzah answering a question raised during the question and answer session in Parliament today.

BINTULU: Home Minister Datuk Seri Hamzah Zainudin said the government will make sure that the stateless children will have their own identity to live in this country.

However, he said as a sovereign country, it was not easy to have citizenship in Malaysia, if they are unable to produce valid documentation on their status.

“Not all stateless children would be given citizenship, it should not be in that manner,” he said in response to the question of Bandar Kuching MP Dr Kelvin Yii Lee Wuen in Dewan Rakyat sitting today.

Dr Yii had earlier asked about the government’s plans to facilitate the process of awarding citizenship to the stateless children and to improve the standard operating procedure (SOP) to solve the issue holistically.

He said the status of these stateless children depends on their parents and the government need valid documents and with the complete documentation, the application can be approved within 12 months.

“The births that occurred in Malaysia does not cause any individuals to obtain citizenship automatically.

“His citizenship is determined based on the marriage status and citizenship of parents during the births,” he added.

Hamzah said there were many problems on the procedures occurred previously and the government has improved the SOP this year more systematically by speeding up the approval for all completed application.

However, in his feedback on the minister’s reply, Dr Yii pointed out that the answers are almost similar every year and there is no concrete solution to the issue as there is no results from the improvement as mentioned.

Dr Yii said there are also war refugees since 1970s in Sabah and Sarawak with the third and fourth generations, and what the government’s plan to solve this problem to make sure these children will not be punished for their parents ‘sins’ and government’s failure to solve it.

Hamzah reiterated that the citizenship issue can be solved amicably if there are valid documents given by the parents to support their application.

For the record, he said for the period of 2015 to June 30, over 30,000 citizenship applications recorded under Article 15 A of the Federal Constitution with a total of 28, 211 application are being processed.

Sabah Chief Minister Datuk Seri Mohd Shafie Apdal stood up and agreed with the view of Bandar Kuching MP on the need for government to come up with a holistic solution.

He said these children were left by their parents at the age of six and seven and grow up till the age of 19 and 20 and since there are no solution they could not enjoy better education.

“If to send them back, to which countries to send them, if there is solution, it cannot be too prolong, there must be a solution,” he added.

Hamzah in his reply said in life there should be no double standards and if looking at the human factor, one need to look at their valid birth documents.

“If you are looking at a human factor, let me handle so that we can coordinate everything, in the end we will know they were born by parents in what citizenship,” he added.

His replies did not go well with the Opposition bloc as they requested for more explanations but was not allowed by the newly minted speaker Datuk Azhar Azizan Harun in order to give way for other questions.