Tuesday, October 19
You are at:Home»News»Wee: MBKS will revoke operating license of eateries if SOP not complied with 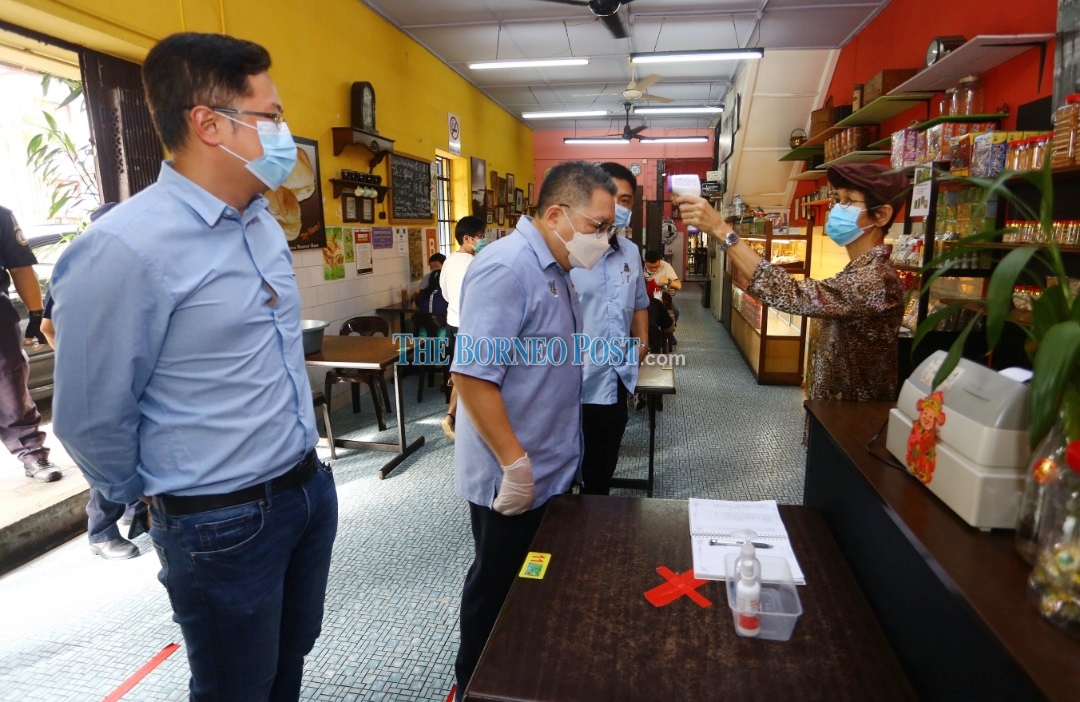 Wee (center) has his temperature taken at one of the coffeeshops during the surprise check. Photo by Muhammad Rais Sanusi

He added that the council cannot close down the premises but can remove their license as an option.

“Food premises and eateries licensing is under the council. If they don’t obey and don’t do it (SOP) we can remove the license,” he told reporters after a surprise check with MBKS officers at several premises around Padungan.

“Don’t force us to do so, we know times are bad. Let us work together, and I think everybody wants to survive in this difficult time, but lets do it in a win-win situation.

“You are not just helping us but helping yourself as well. Let’s keep us safe.”

Speaking about the surprise check, he said he decided on it last night to follow along with the enforcement team to see how things are with regards to the SOP at the premises in the area.

“There have been a few new cases in the last few days. As the authority and city council, we have to be proactive and we have to be moving faster than the virus that is spreading,” he said.

“We appeal to the public and business community as a whole to co-operate and work together. We have to fight this virus together. We would also like to advise people on social media to not be a ‘social media hero’ to spread rumours.”

At the same time, the council also received complaints from the public that calls to the council were not answered.

“Members of the public who wish to make a complaint about those not following the SOP, please call 010-9589238 or 019-8281495 – these are the numbers of our enforcement team members. If it’s under MBKS jurisdiction, please call us,” Wee said.

Wee revealed that hand washing basins will be installed at hawker centres under MBKS jurisdiction so that patrons can wash their hands before eating.

“We will start first in Hui Sing and Batu Lintang. Sometimes the toilet is a bit far and people tend to be a bit lazy sometimes, so we’re installing the basins for the convenience of the public.”