Saturday, August 15
You are at:Home»Columns»Have we gone batty? 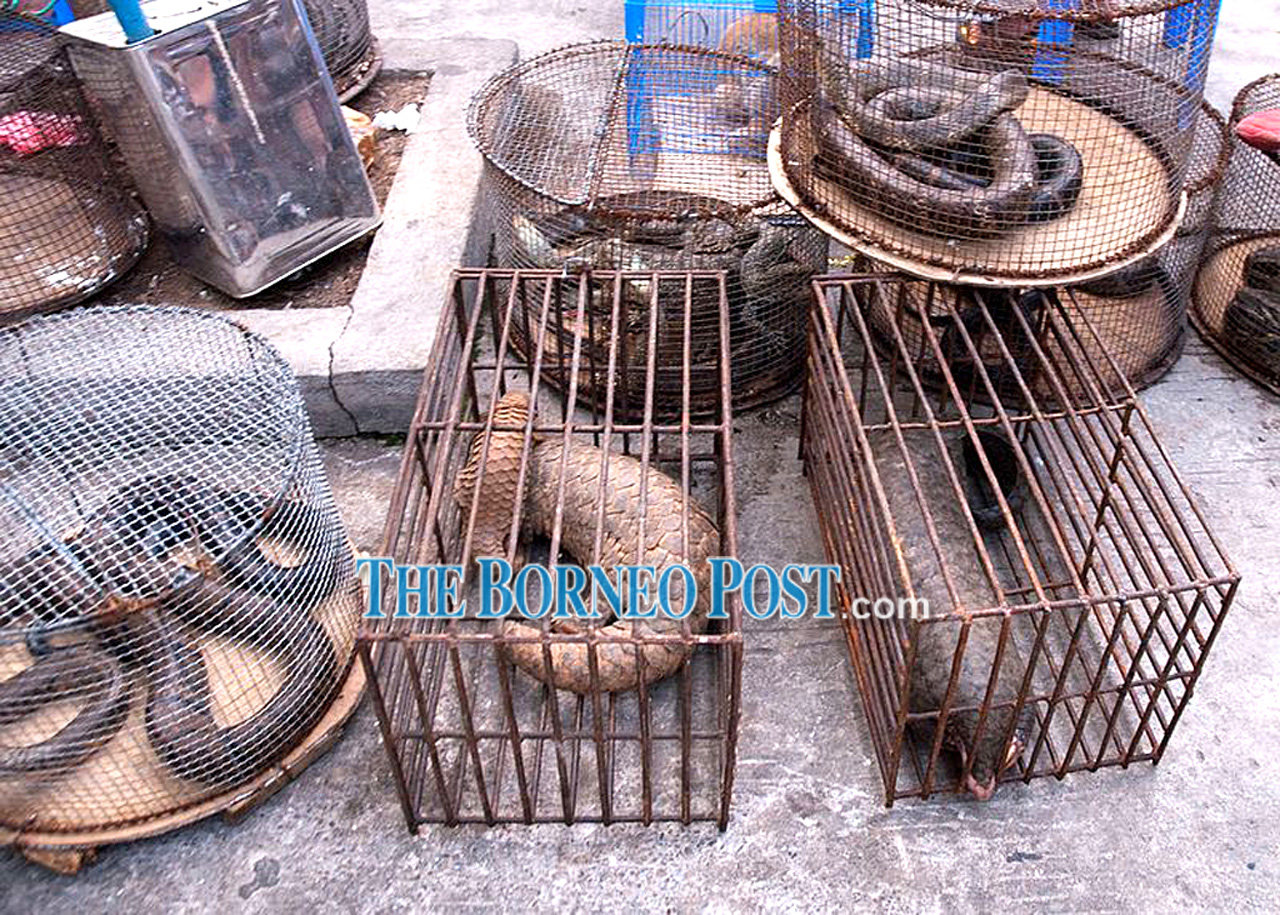 DESPITE abiding strictly with the Malaysian government’s Movement Control Orders for over three months, I am now back in my UK home under an enforced two-week self-quarantine order recently imposed by own government. I am not as yet ‘going batty’ nor do I have ‘bats in my belfry’! However, the origins of Covid-19 disease have greatly interested me.

Whilst in Kuching, I sat out in the evenings breathing the unpolluted urban air and saw a couple of very small bats dip down into the garden chasing flies. Here, in my English back garden, I am not the least concerned to see, at dusk, several Pipistrelle (Common European) bats sweep down to consume gnats, midges and even the odd mosquito! Both insectivorous and echolocation species bats do not perturb me unlike the link which appears between Covid-19 to the much larger frugivorous species.

The latter I first encountered in flight at dusk along the Kinabatangan River in Sabah and, in daytime, roosting on trees in the Seychelles (Seychelles fruit bat) and on an island in Northern Madagascar (Madagascan fruit bat). Whilst England hosts only 18 bat species, Malaysia boasts over 120 of which I shall concentrate on but two species – the smallest and the largest.

The smallest and rarest of Malaysian fruit bat species, it has been documented at Sepilok, Baturong Caves, and Poring in Sabah and in the Baram, Niah, Kubah, and Kota Samarahan areas of Sarawak. Averaging less than 150 grams in weight, with short fur body colourings of greyish, silvery brown, it feeds on a variety of seasonal fruits, but figs from primary rainforest trees are its favourite diet. Deforestation is the bane of this species, which acts as important seed dispersers in the rainforest ecosystem.

Seemingly monogamous mammals, both females and males reach sexual maturity upon reaching half their body weight. Little is actually known about the Dyak fruit bat other than, usually, they produce one baby with one or two month’s lactation time.

The male bat lactates too thus probably taking the feeding pressure off the female. As these bats consume fruits with a milk producing hormone, phytoestrogen, there is the possibility that this allows males to lactate. Tending to live in the top canopy of emergent primary forest trees, their relatively inaccessible locations have hampered further research. 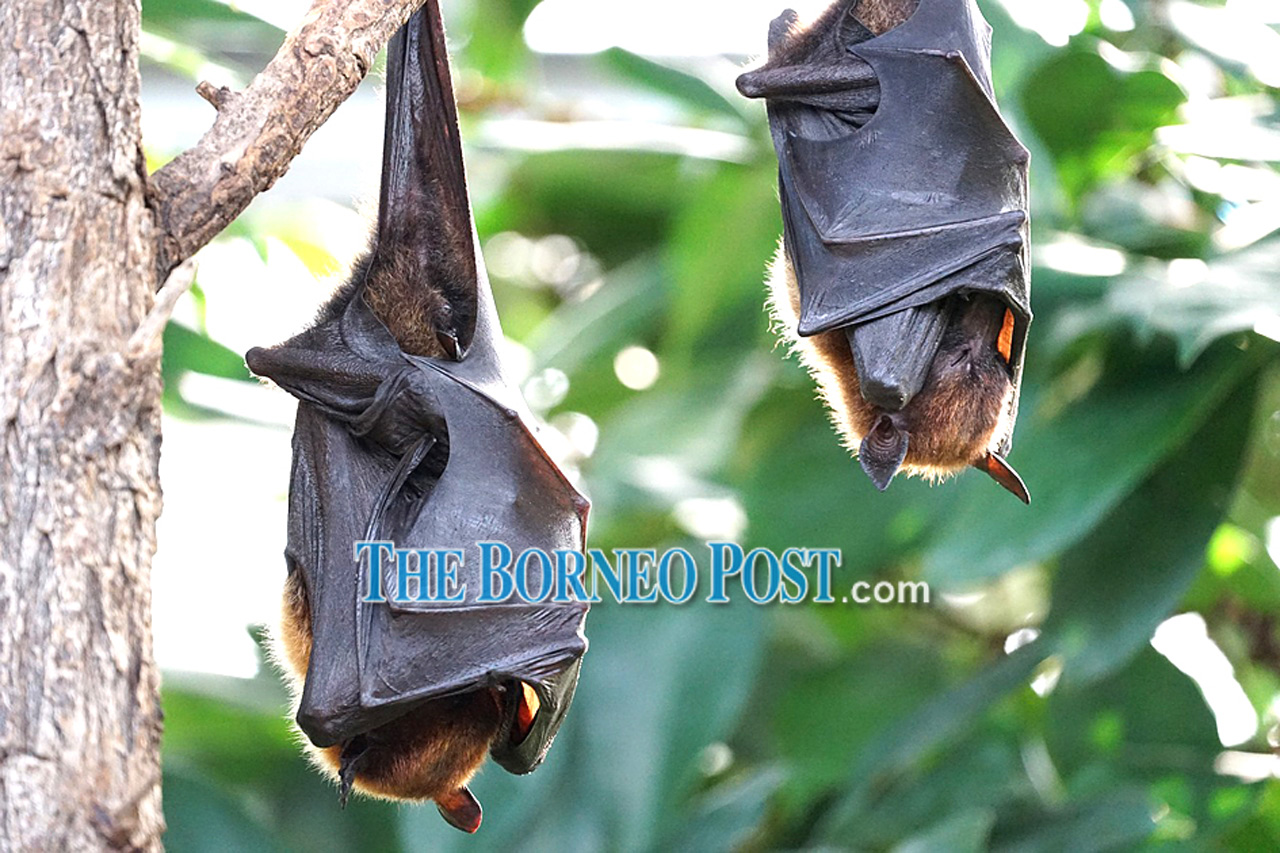 The Malaysian flying fox is one of the world’s largest species of bats.

This species is one of the world’s largest bats, weighing between 700 grams to 1kg, with a wingspan of 1.5 metres. Its bodily length averages 29.5 centimetres, which is topped with its fox-like, pointed ear face housing 34 teeth! With long, woolly fur, different parts of its body vary in colouring from buff, orange, to dark golden brown.

These bats nightly feed for up to 50km away from their day time roosts preferring the nectar and pollen of coconut and durian trees, and the fruits of figs, langsat, rambutan, bananas, and mangoes. Their roosts can see up to 1,000 and sometimes more of these bats, positioned upside down with their wings wrapped closely to their bodies in an upright stance. Here, in Borneo, they tend to be found in coastal areas using mangrove and coconut trees in which to roost.

Regrettably, for the health of humans and for the ecology of tropical rainforest areas, these bats are hunted for bush meat and by farmers who fear damage to their orchard crops. Hunters must hold a licence and the legal annual cull of 22,000 per annum is often exceeded. Deforestation has meant habitat loss. Fortunately, this near-threatened species is restricted in international wildlife trade. That said, illegal hunting and bat-meat selling and consumption takes place and even smuggling of bat bush meat to indiscriminate local and overseas marketers.

Bats have been found as ‘reservoir hosts’ of many zoonotic-natured viruses and the transmitters of these diseases to other mammals including humans. A detailed study by the Faculty of Veterinary Medicine at Universiti Putra, Malaysia in 2017 examined the possibility that a livestock deer farm adjacent to a wildlife sanctuary near Ipoh was at risk of spillover infections from Malaysian fruit bats concluding that this was highly likely. Can you remember the 1998 Nipah virus outbreak, which moved from fruit bats to pigs to people and necessitated the cull of thousands of Malaysian pigs and the bankruptcy of hundreds of farmers?

Before that, in 1994, Queensland, Australia displayed the Hendra virus, a contagion which jumped from bats to horses and to humans causing two deaths. Likewise, Ebola is thought to have been transmitted by tropical fruit bats to apes and as bush meat to humans. Remember, in 2002 to 2003 the severe acute respiratory syndrome (SARS) coronavirus, which killed 926 people worldwide? A similar virus was found in palm civets containing 99.8 per cent of SARS genomes to be sold in China’s Guangdong animal markets.

Later, Dr Shi Zhengli (affectionately known as China’s ‘Bat Woman’) of Wuhan Institute of Virology, found that horseshoe bats in Shiton Cave, Kunming, Yunnan Province, were the reservoirs of this virus. These bats fed off the famed orange and walnut orchards in southwest China.

This coronavirus did not ‘escape’, as has been speculated in news reports, from a laboratory in Wuhan now leading to the deaths of over half a million people and infecting 10 million people worldwide. It has long been known that the rate of new infectious diseases is accelerating in developing countries where high population densities of urban areas might mingle with animals and then travel worldwide spreading the diseases from human to human.

George W Bush in a press address in the USA 15 years ago forcefully stated this, only to be echoed by Barrack Obama a few years later. We were warned of such and in stoical fashion wrongly believed that it could never happen to us!

Globally, scientists have carried out more than 4,500 genomic sequences of samples of this particular virus all concluding that these all point to a common source transmitted by bats to animals and hence to humans. Subsequently this virus has been sustained by human-to- human transmission. Wildlife markets dealing in bats, badgers, civets, crocodiles, and pangolins are the melting pots for this disease.

In the case of Covid-19, humans have directly contracted this disease from bats roosting in their houses and infecting local fruit or as bush meat or from pangolins as intermediate hosts of this virus. Whilst it is difficult in proving that Chinese pangolins are thought to be the host categories, it is worth remembering that they are close relatives of the Sunda pangolin (Manis javanica) found throughout Borneo and now declared a critically endangered animal species.

Science researchers, specialising in virology, have found that frugivorous bats are not the real problem for this lies with us by getting in contact with them! High risk people to be infected with this disease are most likely to be living near bats such as villagers, farmers, miners, and those who hunt and handle wildlife alive or as bush meat. That said, the most frightening discovery, based on mathematical modelling, reveals that there are more than 5,000 strains of coronavirus worldwide in bats, awaiting discovery. Such pandemics, occasioned in late 2019 to now by CoV-19, are with us for a very long time.

These thoughts you may read are from a pessimist – only time will tell! Take care and still remember to stay safe.

Footnote: I am grateful to the following publications for use in this article and these will provide more specific scientific details than I can fully comprehend:

1. The Scientific American June 2020 ‘How China’s Bat Woman Hunted Down Viruses from SARS to the New Coronavirus’ by Jane Qiu.