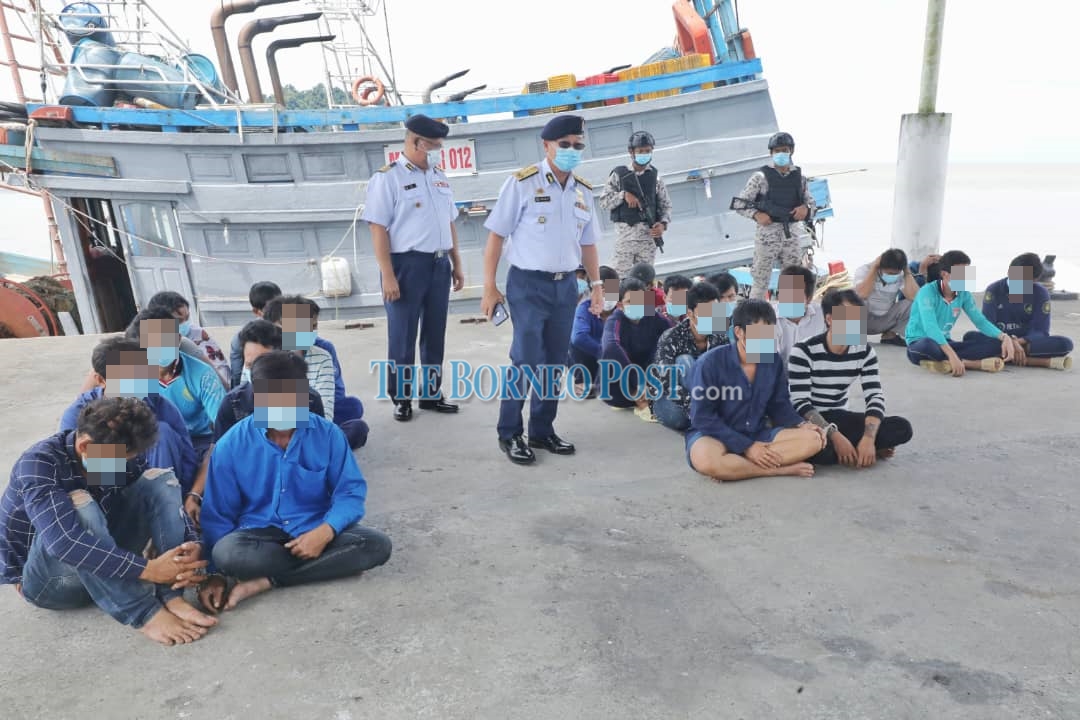 Teh (standing, second left) with the Vietnamese fishermen at the APMM jetty this afternoon. – Photo by Chimon Upon.

MMEA Sarawak director First Admiral Robert Teh Geok Chuan said the Vietnamese nationals, all men aged between 21 and 55 years old were arrested some 221 nautical miles, north of Muara Tebas here at around 7.30am last Friday.

Teh said the fishermen in both vessels were busy with their illegal fishing activities in Sarawak waters when personnel from the MMEA’s patrol boat KM Sri Aman spotted the vessels.

He added that all the foreign nationals failed to produce any personal identification when they were detained.

Teh also said both vessels, fishing equipment, and their catch weighing at about two tonnes and 19,000 litres of diesel, estimated to worth about RM2.5 million were seized by MMEA during the operation.

As a precautionary measure, they were asked to go for Covid-19 screening at Petra Jaya Health clinic, here.

The case is being investigated under Section 15(1)(a) of the Fisheries Act 1985, for not having legal document to fish in the country’s waters, which provides for a fine of up to RM6 million or imprisonment of up to two years for the skippers.

As for the crew members, they could be fined up to RM600,000.00 per person or imprisonment up to two years and their vessels could be stripped from its rights.

Teh also said MMEA is committed to ensure that there will be no encroachment by foreign vessels in Sarawak waters by conducting frequent patrols and coordinated operations to arrest foreign fishermen who are conducting illegal fishing in the state waters.

The public who has the information on the encroachment of foreign fishing boats or any suspicious activities in Malaysian waters, especially in Sarawak waters are encouraged to channel their information to MMEA by contacting the Sarawak State Maritime Operations Centre at 082-432544 or MERS 999 which operates 24 hours.

Previous ArticleWee to take legal action on Michael Kong over Facebook post
Next Article No road blocks, people can travel to hometowns for Aidiladha – Ismail Sabri