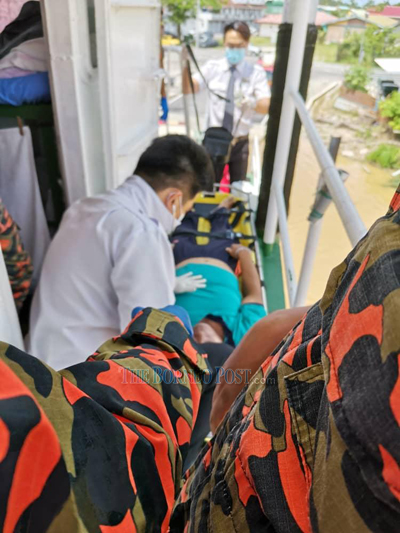 A medical personnel checks the victim, who was pronounced dead shortly after.

The deceased, identified as Darling Sagau, 60, was operating the ferry when he collapsed in his seat and became unresponsive, prompting a worker to take over and steer the ferry to the crossing point across the river.

Fire and Rescue Department (Bomba) Bintangor chief Nicholas Belulin said they received a distress call from the ferry worker at 1.05pm and rushed a team to the scene.

“We carried the victim down from the upper deck of the ferry to be examined by paramedics, but he was pronounced dead at the scene,” said Nicholas, adding the body was later handed over to police for further action.

Meradong police chief DSP Sekam Anoi when contacted said the case has been classified as sudden death pending a post-mortem.

He said the victim, whose address was in Kampung Sawai, Batang Lassa according to his identity card, is said to have a history of high blood pressure and diabetes.

“The body has been sent to Sarikei Hospital. The actual cause of death will only be known once the post-mortem is completed,” he added.